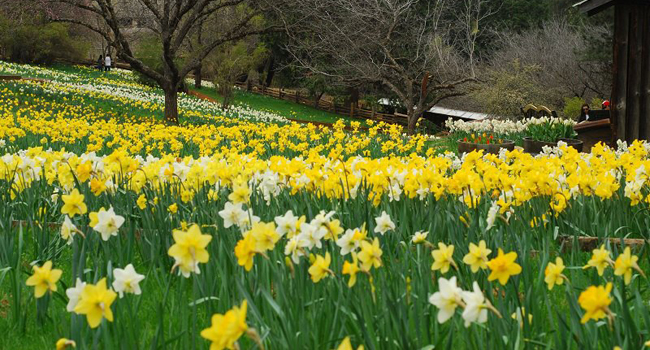 Now’s the ideal time to get out of town, stretch your legs and check out wildflowers in bloom. Here are a few ideas to get you started from Steve Evans, author of “Top Trails: Sacramento: Must-Do Hikes for Everyone.” Drive to Oroville and walk through the NORTH TABLE MOUNTAIN ECOLOGICAL RESERVE. Now owned by the state’s Fish and Wildlife Department, this elevated basalt mesa has plenty of volcanic rock, numerous Sierra-fed waterfalls and, in March and April, amazing flora. “Hands down, this is the best wildflowers hike in Northern California,” says Evans. There are no marked trails to follow, so hikers “just sort of wander all over.” dfg.ca.gov/lands

For the more ambitious hiker, try the 25-mile SOUTH FORK AMERICAN RIVER TRAIL. It starts near Coloma and ends up at Salmon Falls Bridge near El Dorado Hills. Along the way, hikers encounter oak woodlands, river vistas, wildflowers and rolling grasslands that can be “stickery” in summer, Evans says, but a joy to traverse this time of year. arconservancy.org

CODFISH CREEK FALLS, on the North Fork of the American River, is the ideal hike for families with children, says Evans. You walk about 1.5 miles to a pretty, 50-foot waterfall, then back again. Catch the trail at Weimar, 10 miles east of Auburn, on Interstate 80. alltrails.com

And don’t forget the COSUMNES River Preserve. This local treasure is 50,000 acres of wildlife habitats and agricultural land. Among the sights: hundreds of species of birds, tule marshes, native grasslands, valley oaks and buttonbush thickets. You can walk it on your own or, on the first Saturday of each month, take a free 3.1-mile guided tour led by docents. cosumnes.org

A Sea of Yellow

Stop and smell the daffodils. Actually, they’re not all that fragrant, but they make for a visual feast in March and April, when they bloom at DAFFODIL HILL in Volcano. Thousands trek each year to the Amador County ranch that was established in 1887 as a resting point for miners, Pony Express riders and others making their way across the Sierra. The McLaughlin family started planting daffodils back then, and their descendants have continued the practice. There now are about 300,000 bulbs in bloom during the four or five weeks when the farm is open—for free—to the public. On the way home, stop for a drink at Whiskey Flat Saloon, which looks like it was built in the 1850s but actually dates only to the 1930s. Then have a great meal at Volcano Union Pub or the St. George Hotel. suttercreek.org

Bad Boys in the Foothills

Travel to Ione and visit PRESTON CASTLE, the Romanesque-style edifice that opened in 1894 as the Preston School of Industry. It was a pioneering facility for youthful offenders: a place where boys convicted of crimes could learn a skill instead of being housed at San Quentin or Folsom Prison with adults. “It wasn’t a prison; it was a place for rehabilitation,” says Marie Nutting, a board member of Preston Castle Foundation. It was closed in 1960, later was designated as a California Historical Landmark and now is supported by tours held from late March to September on Saturdays and some Thursdays. The place is reputed to be a center of paranormal activity; tours are offered to people looking for an otherworldly experience. “People think they see and hear things there,” says Nutting. (She’s skeptical.) Believers suggest the building is haunted by the ghosts of boys who died at the facility and by a housekeeper who was murdered there in 1950. Palm Drive, Ione; prestoncastle.com

Deep Down in the Ground

Go to Grass Valley and visit EMPIRE MINE STATE HISTORIC PARK, site of one of California’s deepest, richest and longest-running gold mines. The two daily tours (1 and 2 p.m.) tell two tales. The first shows the opulent home and gardens of the Bourn family, which owned the mine. The second takes visitors into the mines, where workers toiled a mile underground to haul out a total of 5.6 million ounces of gold. Highlights include a simulation of how miners traveled down the shafts and the “secret room” where visitors can see a scale model of the mine’s underground workings. parks.ca.gov