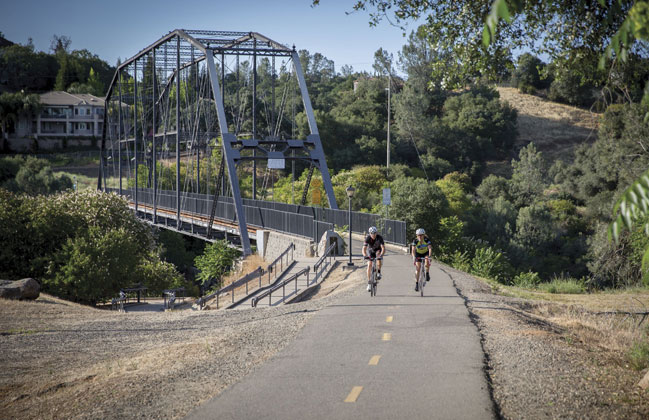 Television commentator Phil Liggett is known as the voice of professional cycling—an announcer so colorful that his phrases have been collected in a book as “found poetry.”

Folsom city officials, however, love him for just one quote, blurted out when America’s biggest road cycling race, the Amgen Tour of California, came to town last year. “This is such a beautiful city,” Liggett said to a TV audience of millions in more than 100 countries. “Why haven’t we been here before?”

Liggett might not have noticed Folsom before, but the city has been on cycling’s map for a long time. Recreational cycling was booming before Amgen arrived, and it has a deep past in the city.

In 1896, hundreds of Sacramento cycling aficionados inaugurated a gravel trail along the American River. By that summer, the trail stretched to Folsom, and riders competed in races. The fastest were getting up to Folsom from Sacramento in just over an hour, according to historic accounts.

Today, people are doing the same thing, some riding space-age bikes and sporting technical fabrics and electronics. Others take their time on town bikes or hybrids towing kids in trailers. There are more bikers, more clubs, more cycle shops and more trails in Folsom than ever before, and lately the growth of cycling seems faster than the population growth.

The Friends of Folsom Parkways group has done what appear to be the only bike counts in the area, focusing on local trails. Tallies provided by Jim Kirstein, the group’s president, show cyclist numbers jumping by nearly 175 percent between 2010 and 2013 at the historic truss bridge connection to the Jedediah Smith Memorial Trail.

“It used to be maybe you see five or six people on the bike path. Now, especially on Saturday, it’s packed,” says Chuck Noble, a leisure cyclist having lunch at Karen’s Bakery & Cafe in the historic district. Karen’s is one Folsom hot spot where cyclists fuel up. (Others include Coffee Republic and Folsom Grind, attached to Folsom Bike, on the other side of the American River.) At peak season, so many cyclists crowd Karen’s on Saturdays that the cafe had to establish an express line for coffee and pastries. Thirteen years after moving to her current location, owner Karen Holmes estimates 30 percent of her business comes from cyclists. She thinks the majority of her bags of granola sold go home in cyclists’ jersey pockets. “I did not foresee the cyclist population embracing us like they did,” she says.

Karen’s popularity with bike riders comes from many things: It is just off the Jedediah Smith trail—also known as the American River Bike Trail—and is also next door to Bicycles Plus, the oldest cycling shop in town. And, of course, there’s Karen’s food.

Sarah Kerem and Marina Sullivan are sampling that on a recent afternoon, sharing a dish of green-salsa pulled pork and a roasted beet and carrot salad on pistachio pesto after a ride.

“This is the best muffin I’ve had in my life,” Kerem says, offering a piece of a blueberry muffin, a pastry depicted on a cycling jersey Holmes sells to loyal customers.

At the next table sit four other regulars, members of the Bodacious Biking Babes, a women’s bike club that illustrates how everyday folks represent cycling in Folsom.

The club began after a girlfriend asked founder Vicki Summers if she’d like to join her on the two-day Emigrant Trails fundraising ride. “I rode 130 miles and thought I might die,” Summers recalls. “I didn’t know you had to practice.”

She rounded up friends and began to log miles. First they rode in town. With time, it was around Lake Natoma, then down to Carmichael, and finally all the way to Sacramento.

From Folsom, the American River Bike Trail  passes along lakes and rivers, through lupine and poppies. Turkeys, herons, egrets and deer are common. There are uncommon species, too. Marilee Flannery, one of Summers’ lunch partners, has documented a western wallflower along the trail, a bloom that hadn’t been officially recognized as occurring in Sacramento County.

From little local rides, some Bodacious Biking Babes have moved on to cross-country rides and Ironman events, but the phrase “strong cyclist” doesn’t have to imply speed or endurance. It can refer to character. They have raised hundreds of thousands of dollars for various charities.

Chris Mumma, a member of the bike club Cycle Folsom, also represents character. Mumma is a military veteran who was wounded in combat and overcame it, and later dropped more than 100 pounds cycling. It started when Mumma was in the Veterans Administration hospital with a service-related condition. He weighed 270 pounds.

Knowing something had to change, he got his first bike and started cycling. Later, he was diagnosed with cancer but kept biking, he says. Another round of chemotherapy is ahead. “I’ve kept riding through all that,” he says. “It’s all mental. I know if I just sit on the couch, I will just let myself die.” Instead, the day he was interviewed he rode about 25 miles in the morning and planned another ride in the evening. He had to be at that one, because he was leading it for Cycle Folsom. Cycle Folsom’s red-white-and-black outfits are instantly recognizable to bike trail denizens as the club’s peloton zips by. Cycle Folsom has nearly 1,000 registered members. More than numbers, members are proud of how the club welcomes everybody, trains beginners and makes sure people can ride safely. The club’s motto is “Great cycling starts here.” That can be applied to how they ride, but also to the fact that many club rides start in Folsom, then head out of town. Great road and trail riding surrounds the city.

Folsom began planning trails in 1988 and eventually hired someone whose sole duty is trails. Most trails connect into the Humbug-Willow Creek trail system, on which a cyclist can cross the city from the far northeast, near Mormon Island Dam, to the west side near Folsom Boulevard. It’s seven or eight miles through oak woodland and past marshy areas with cattails, yellow wild iris and redwing blackbirds. Cyclists face nearly no intersections with the city’s high-traffic boulevards, because the route often ducks beneath the streets. The intricate trails aren’t engineered for speed-demon cyclists, but everyone else can enjoy it for nature viewing or for human-powered commuting.

The latest high-profile addition to Folsom’s trail network is the Johnny Cash-Folsom Prison Blues Trail, which includes what is probably the only bike bridge in the world designed to look like prison guard towers. The trail takes cyclists and pedestrians across busy Folsom Lake Crossing Road and skirts Folsom Prison grounds.

Trails are now drawing people to live in Folsom, says Mayor Andy Morin, who quoted announcer Phil Liggett’s praise in his State of the City speech. Recognizing how much people like the trails, one developer eliminated an originally planned golf course in favor of adding trail mileage. The city has more than 30 miles more in the works.

“I’m a firm believer in the city of Folsom’s commitment to cycling,” says John Crews, owner of Bicycles Plus. Amgen officials echo that, saying they hope to bring the race back because of the city’s commitment—not just to the race, but also to healthy living, including exercise.

Folsom facilitated Amgen in 2011 and 2014, put bike lanes on key large roads and has added other little touches. One of those is a secured bike facility in the Leidesdorff parking garage. Residents can ride their bicycles to the garage, store the bike and hop on light rail at the adjacent station, avoiding the troublesome Highway 50 commute—or any car use.

That station also enables cyclists to bring bikes to Folsom on light rail from Sacramento and ride the American River trail downhill to get home. Not everyone wants to avoid climbing hills, though. Many cyclists come to Folsom because that’s where the hills start. They may ride Iron Point Road up what’s popularly known as Costco Hill—actually Carpenter Hill—and out to El Dorado Hills. Other routes head out to Cool or Auburn.

Road cycling is just part of the two-wheeled whirl of Folsom. Groups are working to improve commuting opportunities and boost cycling to school. Mountain bike teams have popped up at the local high schools. The teens from Folsom High sometimes race at the nearby Prairie City off-road park. Matt Colonius, general manager of Bicycle Planet, a team sponsor, also dreams of a velodrome in town.