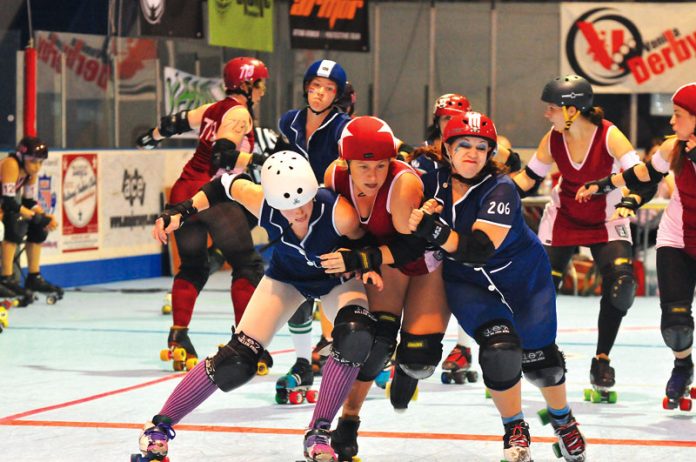 It’s Sunday night at Roller King roller rink in Roseville. But instead of strapping on a pair of skates and doing figure eights out on the floor while Def Leppard plays over the loudspeaker, I’m sitting on the sidelines, waiting for a roller derby bout—one of the hottest new spectator sports in Sacramento—to begin. Decked out in wrist guards and kneepads, two women wearing stripe-covered helmets stand at the ready. Behind them crouch six ladies, dressed in protective gear and brightly colored shorts. At the rear are two women, each with a star on her helmet to signify her jammer status.

One whistle blows and the stripe-helmeted women, known as pivots, take off, setting the pace for the blockers behind them. Two short whistle blasts follow and the jammers at the back shoot forward, each determined to pass the opposing pack and score as many points as possible in one of several two-minute jams that will take place during the bout.

Once considered more theatrics than sport, roller derby made a resurgence more than 10 years ago in Texas. The all-female-league movement hit Sacramento in 2006 with the founding of Sac City Rollers and Sacred City Derby Girls. While Sac City Rollers is an apprentice league within the Women’s Flat Track Derby Association, Sacred City became a full-fledged member league in 2008, making it eligible to compete in WFTDA-sponsored tournaments. This past season, Sacred City’s traveling team, the Sacrificers, placed seventh in the Western region. Home bouts often sell out in advance, with 700 to 800 people packing the rink.

In late 2011, Sacred City added three home teams to its roster: The Donna Party, Midtown Maulies and Roseville Trainwreckers. Developed in response to fan turnout at Sunday Slaughter intraleague bouts, each team includes new skaters and members of the Disciples, Sacred City’s B-team. “With more teams playing at home, friends and family can now see you play,” says a Donna Party jammer who asks to be identified by her derby name: Bite Size. Most league members prefer to go by their derby name while they’re on the track; it’s their calling card with roller derby fans.

These days, derby bouts are exciting but nowhere near as theatrical as in the bloodthirsty early days of the sport. While shoulder and hip checks won’t get a skater penalized, tripping and pushing opponents will put her in the penalty box. “It’s still a full-contact sport,” says Bite Size. The all-volunteer league is self-supporting, with all proceeds from ticket and merchandise sales going toward warehouse and rink rental, travel to and from bouts, marketing, tournament fees and other expenses. As such, Sacred City skaters are committed to their sport as well as to each other. Coach Cash Money has been with the league for five years and has firsthand experience of her sister skaters’ support: When she recently lost her home to a fire, league members provided household items and clothing for her and her daughter.

By day, skaters’ jobs vary; there are scientists, librarians and police officers on Sacred City’s roster. Think derby is just for 20-somethings? Think again: Many Sacred City skaters are over 40. “I thought if I’m gonna do this, I gotta do it now,” says 46-year-old blocker Haute Tammale, who’s been with the team for less than a year. Spiked Wheels, a two-year derby veteran, also is a grandmother. Both women say age doesn’t matter. “When we come to skate, we’re all derby,” says Haute Tammale. “The numbers fly out the window.”