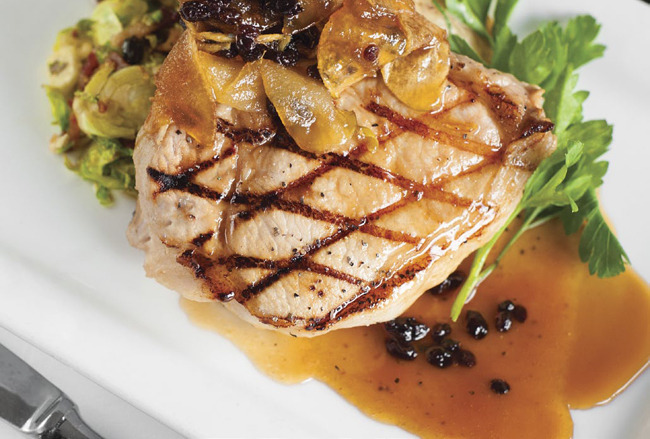 Driving down L Street in downtown can be a surreal experience these days. A familiar landmark—Downtown Plaza—is gone. Rising rapidly in its place is the massive new Golden 1 Center arena. Set to open in October 2016, it’s a breathtaking symbol of the changes that await Sacramento.

Just one block away, at the corner of Fourth and L streets, the owners of Foundation Restaurant & Bar are breathing a little easier nowadays thanks to the arena.

In 2013, Krissy White and Matt Sin were working as bartenders at 4th Street Grille when longtime owner Ron Fleming decided to close the place. They tried to buy it from him, hoping to keep the restaurant open for staff and customers. When the purchase fell through, they struck a separate deal with the landlord to open their own place.

Back then, opening a restaurant in Sac’s down-at-the-heels city center was hardly a slam-dunk. But White and Sin thought they could make a go of it—even without the Sacramento Kings as neighbors. “We talked about the arena, but we didn’t base our business plan on it,” says White.

Foundation opened in October 2013 after a modest revamp to freshen things up. Sin and White removed the carpet, kept the wood bar—a classic—and reupholstered the booths, sinking most of their money into new kitchen equipment. They also renovated the menu, putting a modern twist on comfort food and replacing heavy, old-school dishes with lighter, fresher fare.

Old-timers cried foul when chef Jeramie Smith (a holdover from 4th Street Grille) took their 4th Street favorites off the menu. What happened to the fish and chips? Where’s the pork chop with apple whiskey sauce? And the hot turkey sandwich? “The regulars wanted the old food,” says Smith. “We had to say no.”

Now he changes the menu seasonally and sources products from local farms such as Del Rio Botanical and Grass Valley Grains. But pubby food remains the focus. At happy hour, there are fish tacos, traditional hot wings and a $6 burger. At dinner, Smith serves grilled pork porterhouse with golden applesauce (an updated version of the pork chop) and pappardelle with braised short rib, creme fraiche and truffle oil—a dish that White compares to a “souped-up stroganoff.”

When Downtown Plaza closed to make way for the arena, Foundation saw a dip in business. But with construction well underway, things are better now, says White. She monitors the arena’s progress by the stream of construction workers dining in the restaurant. “Ironworkers were coming in, but now they’re pretty much done,” White says. “Now we’re seeing pipefitters and electricians.”

The bar retained 4th Street Grille’s working-neighborhood vibe. “It’s not a craft-cocktail bar,” explains White, who still works behind the bar several times a week. (So does Sin.) They pour a lot of Manhattans and martinis, though they can make a White Linen—the original Sacramento craft cocktail—if asked.

White, Sin and Smith know that their lives will change when the arena opens in the fall. They’re already thinking about beefing up the staff, adding a late-night happy hour and changing the menu in a nod to their new neighbors. “We will probably have something purple”—the Kings’ team color—“on the drinks menu,” White says. When the arena opens, White will also pay off a long-ago bet to the owner of House Kitchen & Bar, just around the corner from Foundation on Capitol Mall. “I owe Chris Nestor a bottle of champagne,” she says. “I didn’t think the arena would happen.” It’s one bet she doesn’t mind losing.