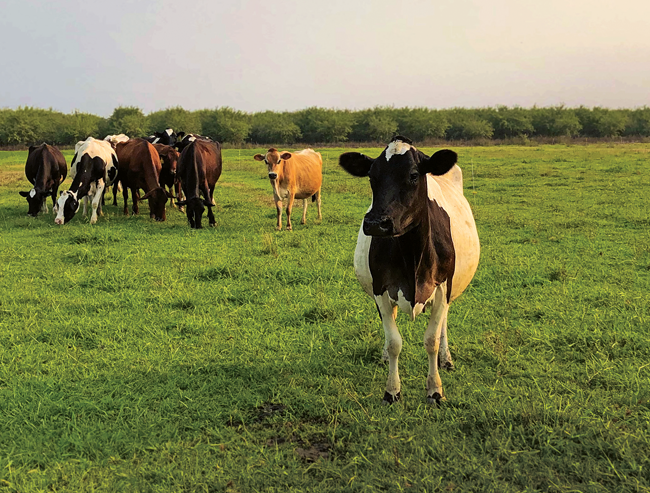 Several years ago, my mother and I took a leisurely drive to Oroville to see the Buddhist temple there, built during the Civil War. We spent a quiet afternoon at the temple, enchanted with the tapestries, carved wood and gold-leaf shields, papier-mache puppets and statues of Buddha. We learned that in the late 19th century, there were as many as 10,000 Chinese people in Butte County, drawn there via California’s Gold Rush and jobs laying railway tracks throughout the region. Afterward, we drove around Lake Oroville and had a picnic lunch there. It was a memorable excursion, in part because nowadays my mother isn’t as active as she once was.

Nonetheless, this past fall, we drove northward again to Butte County, but instead of concentrating on the celestial, we went in search of the culinary. With tickets to Butte’s annual Sierra Oro Farm Trail, we visited mandarin and chestnut orchards, chatted with beekeepers, strolled amid picturesque groves of olive trees, and I sipped wine at two quaint vineyards. Later in the day, driving along a dusty road under a canopy of towering black walnut trees, we ended up at an expansive ranch—an American Western version of Tara, it seemed—for a late barbecue lunch.

It struck me that afternoon, as it had occurred to me after visiting Oroville’s Buddhist temple, that this rather quiet, unassuming rural county might be worth more than a day trip. My mother and I had, after all, visited only a handful of the 31 destinations participating in the farm trail event. I had visited Chico but once, a decade earlier. I had hiked some around Feather Falls.

Moreover, my father, who died in 2012 in Sacramento, was among the state engineers who helped design and build Oroville Dam in the early 1960s—an extraordinary journey and achievement, as he’d only arrived in the United States in 1956, penniless, barely speaking English and fleeing revolution in his native Hungary. I remain rather nostalgic and proud about this.

And so, some weeks after the farm trail, I turned my compass northward yet again, this time solo. I booked a night’s stay in Oroville and one night in Chico.

It was evening by the time I arrived in Oroville and pulled up to the Purple Line Urban Winery. Housed inside a small, refurbished warehouse, it’s warm and intimate. At the bar, I chatted with owners George and Kate Barber about their mostly locally grown varietals, only 250 annual cases of which are processed on-site.

Kate poured me a taste of Chardonnay, then a French Colombard and lastly a buttery Sauvignon Blanc, all recommendable. Meanwhile, she mentioned that George was a retired California Highway Patrol officer. It seemed an unusual transition to the wine business until George interjected, half-joking that he’d worked in the environmental hazards division, which had provided him, he said, with a strong foundation in chemistry now conducive to winemaking. He and Kate live on the same street as their winery in a house built when Abraham Lincoln was president.

We continued chatting out on an adjacent patio, which George explained was a new addition to Purple Line. Along with a boccie court, George showed me a fire pit that he’d recently used to roast a pig for a luau. There was also an appealing metal and wooden canopy resembling half of a yurt, which has become a popular wedding venue. The labor had been mostly George’s, which was impressive in itself, but all the more so because the property had until just a year prior been home to a methamphetamine den. It had required the Barbers’ careful and patient negotiations to acquire the land.

I dined in downtown Oroville at The Exchange, located across the street from the town plaza. At The Exchange, housed in a stately former bank office (the oldest commercial building in Butte County), I sat at the spiffy bar with owner Debi Mills. While sampling the restaurant’s signature crab cakes with lemon aioli and watching Mills’ fiance Nikk Carr mix cocktails, I heard that when she opened The Exchange in August, her idea was to have a well-lit and stylish bar where women—single or with others—felt comfortable. One way to do that, she reasoned, was to temper the image of a traditional bar by offering tapas. Trivia nights, live music and soft lighting round out the atmosphere such that, Mills added, downtown merchants have encouraged and congratulated her since the day she opened her doors. She is committed to using as many local or fresh ingredients as possible, down to the syrups served in drinks and the various available whiskeys. “Nothing comes out of a jug. We try to do as much ‘house-flavored’ as possible,” Carr told me. Shrimp, calamari and cannellini beans from Grana in Chico

Between the wine at Purple Line and my dinner at The Exchange, I’d seen the fork and now was ready to see the farm. The next morning, I sat with Andrew Sohnrey in his truck as he drove me along a gravel road bisecting the farm that has been in his family since 1919. They built canals then for exporting both water and mud, clearing the land for eventually growing almonds, wheat and beans, and raising cattle and catfish. Three years ago, Andrew and his two brothers, Derek and Alex, determined to expand their business. Rather than buying more expensive land, however, they set about manufacturing jams, nut spreads and other delectable treats and opening a small gift shop. It’s truly a family affair: three sons working alongside cousins and wives, with an occasional switching of jobs among them so work in the office or orchards doesn’t become humdrum. I spent some time perusing the wares, and then Andrew let me taste their snickerdoodle almond butter, which is every bit as decadent as it sounds. “There’s tremendous pride in seeing your name on a high-quality product,” Andrew told me as we slowly cruised through the orchards. He explained the lay of the land and described the challenges of rural life this city girl barely thinks twice about: fickle weather and unpredictable crop prices, irrigation hiccups, coyotes, raccoons, skunks and opossums. At one point, I looked out at flooded rice fields covered with a flock of drifting swans. Alas, Mother Nature, Andrew told me, also does her part—“free fertilizer for the crops,” he explained.

Later that day, I had a similar lesson from Lori Noble in Paradise, northwest of Chico. She and her husband, Jim, own and operate Noble Orchards here, the last remaining apple farm in a region where there were once 18. After she sliced a Pink Lady and then a Granny Smith for me to try (the Nobles grow 31 varieties, and eight varieties of peaches as well), she showed me bags of mandarin oranges, jams of all sorts and bottles of locally grown and pressed olive oil. She led me behind the packing shed that dates back to 1931, then a short way to the orchards that have been in her husband’s family for 96 years. I tried to imagine the landscape back then, with all those orchards stretching off into the distance.

The Nobles were among the first vendors nearly four decades ago at the farmers market in Chico, where I had spent some time earlier in the day pleasantly strolling before sitting down for lunch at Grana, just across the street from the market. My lunch of potato leek soup and a green salad sprinkled with Durham Fuji apple and Sierra Nevada Cheese goat chevre would be as locally sourced as it gets, I learned later while chatting with Grana’s owner, Jeff King. Grana’s location, he told me after I ate, is no accident: When he opened his doors on this spot eight years ago (he’d established the restaurant 10 years before that), he was intent on serving hyperlocal cheeses and meats and organic and seasonal produce. Considering that the U. S. Department of Agriculture defines “locally sourced” as any food grown within a 400-mile radius, Jeff’s dedication to pure sustainability—he only has to cross the street to pick up that day’s cooking ingredients, which have been grown and brought in from around the county—might strike you as quixotic. But he’s been terrifically successful with his authentic Neapolitan wood-fired oven pizzas served amid Grana’s urban minimalist interior décor. I appreciated the quiet atmosphere inside as I watched the market’s patrons and vendors in their neighborly trade.

The next day, after a scenic drive south from Chico among ripening vines and orchards stretching to the horizon, I arrived at Durham and drove along its main street lined with antiques shops before arriving at Almendra Winery & Distillery. I might as well have been in Spain as I parked in front of an alluring white mission-style façade.

In 2001, Berton and Carol Bertagna planted their first vineyard at their Chico home and offered wine tastings in their front yard. Eleven years later, they decided to buy the old and abandoned Holiday Market in Durham and transform it into their family’s winery. They gradually expanded the business to include a distillery, making it the only such combination in Butte County. Before sinking into their welcoming armchairs (carved from historically preserved trees felled by lightning in Chico’s treasured Bidwell Park) to sample Almendra’s Chardonnay and Pinot Grigio (both of which pleased my palate), I got a glimpse of Almendra’s three stills through glass windows behind the bar. Each, I later learned, had been somehow—no pun intended—spirited to the area during Prohibition.

Back in Chico, I drove along the leafy Esplanade to reach the Museum of Northern California Art, or MONCA, where curator Pat Kemeny Macias greeted me. She told me the museum was unique in being a pop-up venture and, as its name makes clear, dedicated to exhibiting regional artists. Although MONCA had opened only four months earlier, it had been getting good press, so I was curious. On display during my visit were oil, ink and sculpted works by the late artist James Kuiper, an Illinois native who moved to Chico in 1989 to chair the California State University, Chico art department. Among the most provocative pieces, from my viewpoint, were a collection of assorted masks made of wood, rope and metal and resembling Polynesian shamans.

Afterward, I walked to the stately Bidwell Mansion State Historic Park. As tours take place hourly and I had arrived well ahead of the next one, I walked at leisure across the grounds, admiring especially a ginkgo biloba tree planted in the late 1800s and now electric with its yellow fall foliage. And then I went inside to the free exhibit adjacent to the gift shop.

The interactive displays here are of Gen. John Bidwell’s transcontinental journey in 1841 and his deep engagement with the region’s political and social life. President Rutherford B. Hayes, Gen. William Tecumseh Sherman and John Muir were all guests at John and Annie Bidwell’s home. The native Mechoopda people befriended Bidwell and eventually worked for him. In 1860, he designed the town of Chico and donated land for what would eventually become a state university campus. Throughout, he was an enthusiastic booster of Butte County’s agricultural prowess: He harvested award-winning wheat and produced California’s first commercial raisin crop, among other achievements.

Bidwell was clearly a hardworking immigrant who made a better life for himself and contributed greatly to his new home. Chinese immigrants a century later would follow his lead, as would later my father. With that, I took a short detour to Oroville Dam before heading back to Sacramento, and reflected there on the half century my father lived in Sacramento, his work ethic and modesty, his delight in good food and wine long before the farm-to-fork movement. It took me years to appreciate all of this. Yet a mere weekend meandering the peaceful byways, orchards and vineyards of Butte County granted me the chance to raise a glass in his memory.