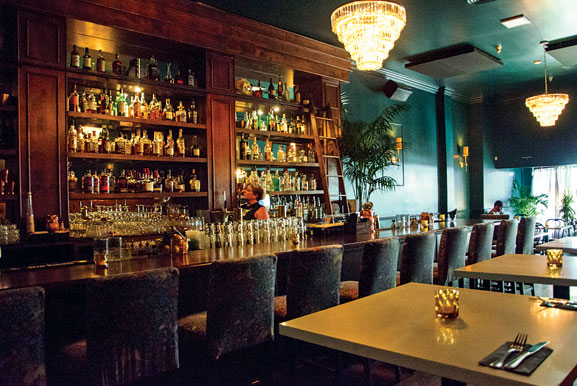 Tyler and Melissa Williams, the duo behind the popular midtown watering holes Tank House and The Jungle Bird, recently opened a midcentury-inspired cocktail bar in the heart of downtown that’s generating as much buzz as a Sterling Cooper ad campaign. Ten Ten Room, a cozy venue nestled next to Grange restaurant on 10th Street, is what Tyler Williams describes as “Grandpa’s bar—old wood, dark, kinda classy but with a little bit of grit to it as well.”

The husband-and-wife proprietors travel extensively researching concepts for their establishments, but this time they found inspiration a little closer to home. “We were in San Francisco’s North Beach neighborhood, popping into these hole-in-the-wall bars that have so much spirit and history behind them,” says Williams. “We wanted to re-create that feeling with Ten Ten.” After immersing themselves in all things tiki for the launch of The Jungle Bird, the couple went with a subtler approach for Ten Ten Room. “After Jungle Bird, we had so much kitsch in our lives it was nice to reel it in a bit this time around,” says Williams. The new space, with its dark wood paneling, wide upholstered booths and posh chandeliers, manages to feel nostalgic and fresh at the same time. It successfully merges the swank of a high-end steakhouse from the ’50s with the all the comfort and familiarity of a neighborhood bar. That air of nostalgia carries over to the food and cocktail menus, which feature retro recipes with a contemporary twist. When the owners sat down with general manager and beverage director Jason Withrow to plan out the offerings, “we envisioned a midcentury theme, but done really well,” explains Williams. “Lots of midcentury cocktails have dumbed-down ingredients. But with the craft cocktail insurgence, we wanted to use fresh, quality ingredients.” Indeed, imbibers probably won’t find a better Harvey Wallbanger or grasshopper in town. Ten Ten’s food menu is deliberately concise and straightforward. Williams explains that he asked chef Greg Pilapil to devise a menu that was “very old school and easy to read, with no confusing ingredients but with surprising, awesome ingredients.” So far, the crowd favorite is the garlic steak sandwich, which is “really nothing more than nicely cooked New York strip inside of garlic bread. People just love it.” After launching three wildly popular establishments in rapid succession, this couple clearly knows a great concept when they see one. But they’re careful not to repeat themselves. “It’s important to me personally to have different styles of establishments, especially with them being so close to each other,” says Williams. “We want to try to create more bars in Sacramento as a whole, not try to compete with ourselves or outdo the guy next to us.” What concept they might explore next is anybody’s guess. Says Williams, “We love like a million different things, so we really nerd out on stuff and put it all into whatever project we’re working on.” But as for now, “we honestly want to take a break.” French fries with cheese and gravy