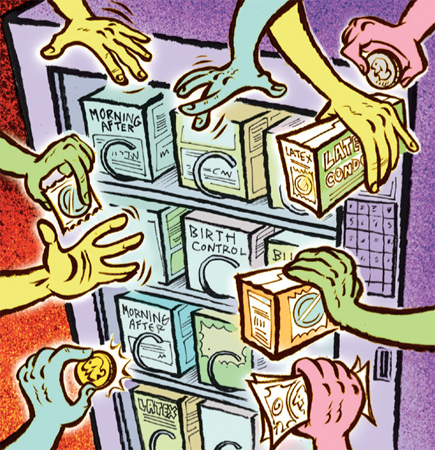 In April, the campus installed a Wellness to go vending machine in the activities and recreation center, which is open to students 18 hours a day, and is closed only when the building is locked at night. It’s one of the first campus vending machines of its kind, and the first to have been brought in as part of a student-led campaign.

Parteek Singh helped birth this idea in fall 2015 while running for the student body’s university senator position. He asked his peers what they wanted to see on campus, and a friend told a story about a time she needed an emergency contraceptive and nothing was available.

“The on-campus health center is only open Monday through Friday 9 a.m. to 5 p.m.,” says Singh.

Seeing this lack of accessibility as a problem, particularly for students who live in university housing and don’t have cars, he hatched the idea of selling Plan B emergency contraception in a designated vending machine on campus. His proposal was rejected by the Student Affairs Department in early spring 2016. after revising the plan to include additional health and wellness products, he resubmitted, and his project was accepted and funded.

“Our role is to support students in being healthy and help them be good stewards of their health,” says Blake Flaugher, sexual wellness health promotion specialist at UC Davis. “We do that by providing them with the important resources they need.”

The vending machine costs approximately $3,000, and the products are supplied by the bookstore and campus health center. it accepts only cash, but there is an ATM outside the building.

“We got rid of the human-to-human interaction,” says Singh. “More people are willing to buy it now that there’s an anonymity factor after adding other products besides the emergency contraception.” If a student is spotted at the machine, it could be assumed it’s just to pick up some Tylenol.

Feedback from students and the community overall has been positive. Singh says many students are thankful for the accessibility as well as the generous discount on certain products—including Plan B, which at pharmacies and drugstores costs anywhere from $40 to $60, but is sold for $30 from Wellness to Go.

“The impact has been huge already,” says Singh. “I think every campus should implement this idea.”