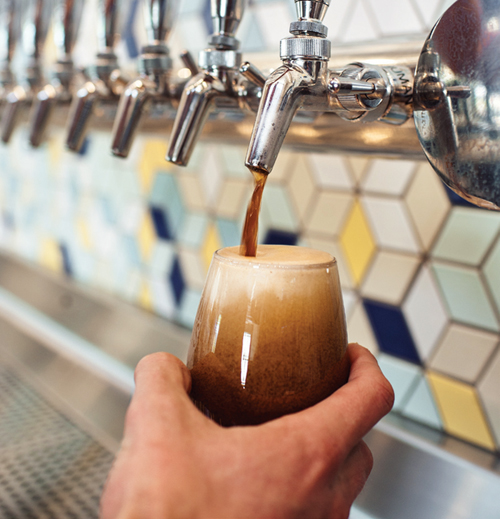 Ten years in the making, Urban Roots was conceived by pioneers of the area’s craft-beer scene: Archie opened his highly regarded Pangaea Bier Cafe well ahead of the current beer craze, and Hoey is a brewer’s brewer who has admirers throughout the industry. But it’s the co-founders’ friendship, not their pedigree, that propelled the establishment forward.

“We’re friends before anything,” says Archie. “We’re different people, but we get along really well. We have a similar sense of humor. We enjoy traveling together. We have gone to beer fests all over the world, and we enjoy talking about the culture of beer.” The beer styles at this smartly remodeled former printing company in Sacramento’s Southside Park neighborhood are likely to push many people out of their comfort zone (in a good way). “We’re not looking at trends or to the market to see what’s selling the most,” Archie says of the offerings. “We’re doing what we love, but with a broad selection, from lagers to Pilsners to IPA to pale ale to porter to Vienna lager.” Archie expresses total faith in Hoey’s beer-making abilities. “Everyone has a superpower, and brewing beer is Peter’s,” says Archie. “He brews very clean beers, and he’s very sensitive to off flavors. I think he knows he’s good, but he never rests on his laurels. I love that he’s always learning, and he’s genuinely a fan of other people’s beer.”

The barbecue-centric food menu, which boasts six types of meat and an abundance of satisfying sides, was a no-brainer for Archie. “I love barbecue because it’s a festive food,” he says. And, for better or worse, it elicits strong opinions. “I always tell our team that barbecue is the most judged food on Earth. People think their mom or cousin or auntie could do it better because that’s what they’re used to. But this is our mama; this is our auntie. This is the way we do it.”

The kitchen’s massive smoker turns out succulent meats—including brisket, ribs, turkey and sausage—in the tradition of the great barbecue houses of Texas, Louisiana and Tennessee. Thankfully, Urban Roots does not give short shrift to its side dishes, which include the usual suspects (collard greens, mac and cheese, potato salad) plus a couple of welcome surprises (yams, poblano cheese grits). Diners can opt for a tray loaded with two or three meats plus a choice of two sides for $14 and $17, respectively. House sausage going into the smoker

The food and beer are served up in a convivial atmosphere. Communal tables were a must for Archie. “That’s what I love about Europe and ‘third spaces’ in general,” he explains. “Whether you’re talking to your neighbor or not, you’re still communicating. I love the seating for that reason.”

Archie was insistent they not hire an interior designer to make over the space, relying instead on their own instincts. “One thing we didn’t want to do was be a trend, a craze, a fad,” he says. “We just wanted to put stuff in here that we really liked,” such as the peppy Heath tile backsplash that serves as the interior’s statement piece, or the playful mural by artist Lily Therens that dominates the patio. “That mural is all about the pillars of our values, what this project symbolizes, what we feel like this region is,” explains Archie. “I love it because you don’t have to know what it’s about to appreciate it. You can just tell that it’s the story of something.”