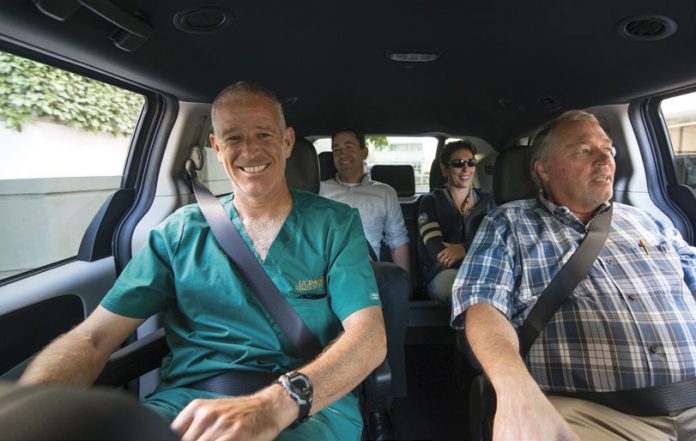 Commuter Chronicles: The Vanpooler, The Rail Rider and The Car-Free Commuter

Twenty years ago, Jack Corbett took a job with UC Davis and moved his family to Grass Valley. He knew it would be a long commute (about an hour and a half each way), but as he puts it, “I like living here, and I like working there, so barring an earthquake that swallows Roseville, I’m pretty much stuck with it.” Corbett and six other UC Davis employees rent a van, then meet each morning in Auburn. They organized their vanpool through UC Davis, which provides a voucher that goes toward the rental.

When did you start ridesharing, and why?
From day one that I was hired, back in ’96. It’s really the only way to go. When you’re driving every day, it’s fatiguing. With rideshare, you can read a book, sleep, visit, work. Then there’s the wear and tear on your car. My round trip is like 137 miles a day. If I were driving every day, I’d be going through cars pretty quickly. And then you have the cost of fuel.

How much does vanpooling cost you?
It’s something like 85 bucks a month per person. UC Davis pays each person $60 for a voucher that goes to Enterprise, which is where we get our van.

What’s your arrangement and how do you make it work?
We all work at UC Davis, and we have a calendar to mark who’s on and who’s off on a given day. If somebody needs the van at lunch to run an errand, they mark it on the calendar. It’s a lot of communication.

What about the important stuff, like who sits where and who controls the radio?
Some vanpools have assigned seats based on seniority, but we’ve never had that. That seems over the top to me. And whoever is driving gets to pick the radio. It’s the reward for driving. I’ve dragged my carpool people through a dragon book series, and they were like, ‘Dude, you’re killing me.’ But hey, I was driving.

Do you drive with some interesting people?
You know, it’s kind of like Cheers. You truly have people that you normally never would have picked to be in the same shoebox for three hours a day, but the conversations are so interesting. We all have our quirks.

She might look like the rest of us, but don’t be fooled: Susan Berg is a hero, along with the other 2.6 percent of Sacramento commuters using public transit, thereby easing congestion for the rest of us stubborn drivers. But for Berg, using light rail isn’t heroic; it was never even really a choice. “I’ve been working downtown for about eight years, and from day one that was my plan because I hate driving,” stresses Berg, who lives in Citrus Heights and works downtown. Light rail is a money saver, she says: “My employer kicks in $30 a month towards transit. Plus, it comes out of my paycheck pretaxes. I have no clue how much I save on gas, but parking in my building is $180 a month. I only pay $15 a month to park with RT.”

Light rail sometimes gets a bad rep. Does it deserve it?
Anybody concerned about being on light rail during commute hours shouldn’t be concerned. I mean, I once had a drunk fall asleep against me about a year ago, but that’s just the way it was. He got off the train and said he was tired. I didn’t want to say I could smell vodka on him, but whatever. In eight and a half years, I can think of three instances, but how many car accidents or road rage incidents have I probably missed by taking light rail?

Have you met other interesting characters?
A barbershop quartet performed once. You meet random people and end up having interactions that you wouldn’t otherwise have. The flipside is overhearing way too many people having conversations with their parole officers or to or about their baby mamas.

Has RT improved in the eight years you’ve been using it?
They’ve made huge improvements. They used to check my ticket only once, maybe twice a month. But now they check it almost every day, though I think it should be like BART, where you have to show proof of purchase to get on in the first place. Also, now there is a security guard at my station in the morning, and that’s new this week, but that always should have been the case.

Any other changes you’d like to see on light rail?
Have a security guard on every train. And if there were a library reading section on the train, I would be there. Sure, some days, share your music with me. I’ve thought about carrying around oodles of single-use headphones and passing them out, but that would probably not go over well.

Would you tell others to use light rail?
Yeah, but during commute hours.

Neil Dursteler, 45, is the best stand-up comedian who ever stood behind the bar at Old Soul at The Weatherstone on 21st Street. Between delivering deliberately deadpan jokes and slinging lattes, the barista is also an avid cyclist who commutes approximately 15 miles by bike from Carmichael. He hasn’t owned a car since 1992.

No car since ’92? How do people respond to that?
People are sometimes shocked, but usually in a good-for-you, atta-boy kind of way.

How long does it take to bike all the way to work?
Just short of an hour on bike, and about 20 minutes when I borrow a car. Remind you, that’s predawn traffic.

What’s the downside to biking to work?
It takes a little longer but sometimes, compared to traffic on the highways, not that much longer. Also, you have to get used to the idea of being a little sweaty when you get to your destination. I’m not crazy about riding in the rain. I’ve had bad experiences, the worst being the type 3 AC separation in my shoulder when I flipped over my handlebars. I had to get cadaver tendons stitched into my shoulder. I have dead man’s tendons in my shoulder.

Is there a rush to cycling that you don’t get while driving?
Oh yeah, I always kind of ride like a badass, like the devil is chasing me. And where there’s a line of cars at a stoplight and I’m whipping past them, there’s satisfaction in that.

Have you ever been hit by a car?
Three times. Once, a woman pulled out from a stoplight. She was just creeping, and I kind of rolled out on the hood of her car. I took my bike off, checked it, turned around, and she was driving off.

What’s the best advice you can give to other cyclists?
Don’t trust anybody behind the wheel.