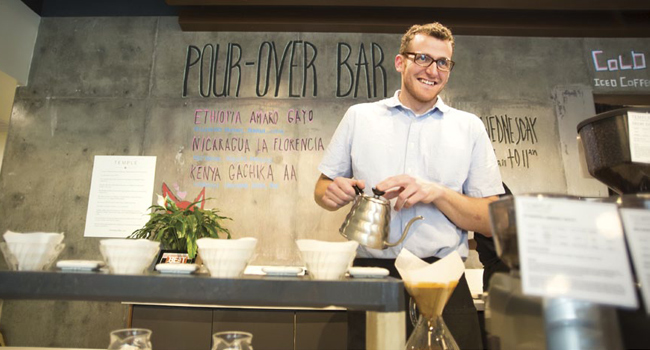 It’s hard to recall a time when coffee wasn’t a big deal in Sacramento. But it wasn’t all that long ago that you couldn’t get a pour-over or a fair-trade, single-origin espresso here, and hip indie coffeehouses didn’t dot the landscape like they do now.

Within the past decade or so, a handful of local entrepreneurs brought craft coffee culture to Sacramento, with places like Naked Lounge, Old Soul, Insight, Chocolate Fish and Temple Coffee. Temple was a pioneer among pioneers: the first coffeehouse in town to sell single-origin coffee. Long before Sacramento thought to brand itself the nation’s Farm-to-Fork Capital, Temple was farm-to-cup, telling customers exactly what farm in which region of which country their coffee came from.

Temple, which operates three cafes and will open two more in the next few months, helped put Sacramento on the coffee map. In January, the digital travel magazine MatadorNetwork.com named Sacramento one of the world’s 11 best cities for coffee lovers, and Coffee Review recently singled out two of Temple’s coffees for its list of the country’s 30 best brews. Temple owner Sean Kohmescher is an unlikely standard bearer for Sacramento’s coffee culture. Raised in Oklahoma, he moved to San Diego after high school for the beach life. To support himself, he worked at a cafe, where he fell in love with cafe culture. “It was a community, people coming and going,” he says. “You’d see the same people every day. Some people you’d see twice a day. It was like an open house all the time.”

After a few years, he relocated to San Francisco for school. While getting a de-gree in graphic design at SF State, he hung out at the city’s cafes and coffeehouses. Dreaming of opening his own coffee shop, Kohmescher moved to Sacramento and went to work for Naked Lounge.

He began looking for his own space, but he had no money and no credit. For working capital, he sold his car (a ’58 VW) and motorcycle (a vintage ’48 Harley-Davidson Panhead), and on Nov. 1, 2005, he opened his first Temple Coffee in the old Tudor-style Levinson’s Books on 10th Street downtown. For the first six months, he worked 17 hours a day, seven days a week, and within a year, Sacramento News & Review named Temple the city’s best coffeehouse.

In 2009, Kohmescher opened a second location on S Street in midtown—a large space where he could roast beans as well as serve coffee. In his first year of roasting, Temple’s Guatemala Hunapu Antigua Bourbon landed a 97 score from Coffee Review, a publication that is to coffee geeks what Wine Spectator is to wine snobs. “That put us on the map,” says Kohmescher.

He eventually relocated the downtown shop to 9th Street and later opened a third, smaller Temple cafe on Fair Oaks Boulevard. Kohmescher designs all the shops himself, giving each one a look and feel that suits its neighborhood. The midtown shop is rustic and industrial, while the downtown cafe is sleek and urban, with lots of windows and two 14-foot-long community tables made of black walnut. The largest of the Temple cafes, it has the room to serve pour-overs and coffee made to order in a Chemex or an AeroPress—the kind of thing that coffee lovers geek out over.

Kohmescher is still in expansion mode: He plans to open a Davis cafe by mid-July and a second midtown location, at 22nd and K, in September. The Davis shop will have a Japanese-modern look and will serve nitro coffees, nitro teas and Kyoto-style cold-brew coffee, made in extremely small batches in a process that takes 24 hours. (“We’ll probably be sold out by 10 a.m.,” Kohmescher says.) The new midtown cafe will be his most personal ever. Calling it “a biography space for me,” he intends to decorate it with art, sculpture and objects that speak to his roots, like a vintage bicycle he’s owned forever. He also wants to do “cool stuff” like coffee, tea and dessert pairings.

Is there room for even more Temple Coffee stores on the grid? Yes, says Kohmescher, pointing to the multitudes of Temple customers who patiently wait in line for up to 25 minutes for an Americano or a French press. That’s a lot of people willing to plunk down almost $5 for a cup of java. Kohmescher doesn’t seem to mind competition from the other indie coffeehouses popping up around town. As far as he’s concerned, they’re just expanding the universe of craft-coffee drinkers. “Every time a new shop opens, we get busier,” he says.