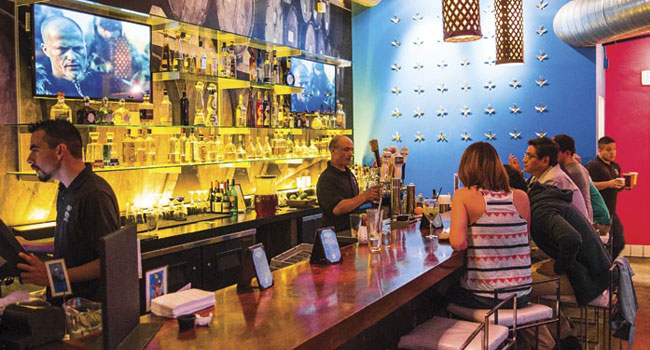 Azul, the midtown restaurant and tequila bar owned by brothers Carlos and Jose Ulloa, feels like the kind of hip establishment you’d find in Mexico City’s fashionable Roma district. Behind the bar, traditional Mexican flavors are the stars in decidedly modern cocktails. One of the most frequently requested drinks is a blended mango margarita made with blackberry syrup and ancho chili powder. Other drinks feature ingredients like tamarind, hibiscus flowers or cucumber. “Our customers also tell us we make the best micheladas in town,” says Jose Ulloa. Azul makes the classic Mexican beer cocktail with seasoned tomato juice, Worcestershire sauce, lime juice, salt and the patron’s choice of beer (usually Pacifico) and serves it in a glass rimmed with Tajin, the ubiquitous chili-lime seasoning. “Our customers order it on a hot day or in the morning with brunch,” says Ulloa. “It’s very refreshing.” 1050 20th St.; (916) 447-4040; azuldowntown.com

When Centro Cocina Mexicana opened its doors more than two decades ago, it made a splash as one of the first restaurants in the city to feature Mexican cooking from a regional perspective. The menu, which acknowledges Diana Kennedy, the doyenne of Mexican cuisine, as an inspiration, remains as relevant today as ever. Of course the cocktails—seasonal margaritas in particular—have always been a big draw here. General manager Joel York, who’s been with Centro for 15 years, is the mastermind behind the infused tequilas and other spirits used in many of the concoctions. “It’s a creative outlet,” says York of his infusions, which include combinations like pineapple-habanero, mango-vanilla and one he calls Key lime pie, with pineapple, honeycomb, lime rind and vanilla bean. His favorite? “Anything with passion fruit.” 2730 J St.; (916) 442-2552; paragarys.com

Classic meets contemporary at Zocalo, a hot spot where the bar is one of the best people-watching perches in midtown. (There’s also a Roseville outpost at Fountains shopping center.) The margaritas here are considered some of the best in the city, but the fun doesn’t stop there: Mojitos, sangrias and Caipirinhas fill out the pan-Latin drink menu. There’s even a Mexican riff on an Old Fashioned, this one made with aged tequila and finished with a splash of mezcal. In a nice touch that says bienvenidos, bartenders keep a steady supply of chips, salsa and bean dip going while you sip. 1801 Capitol Ave.; (916) 441-0303; zocalosacramento.comhttp://zocalosacramento.com