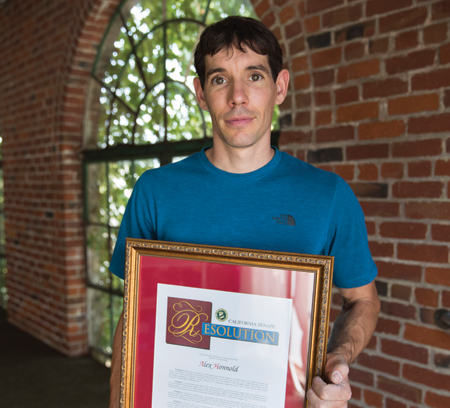 ALEX HONNOLD MADE HISTORY in June when he ascended El Capitan, Yosemite’s 3,000-foot wall, with no ropes or climbing gear. The 32-year-old Sacramento native, who many are calling the greatest free-solo climber in the world, was recently honored by the California State Senate for his achievements.

Getting Started
Being active outdoors was a large part of Honnold’s childhood, whether at his fam- ily’s cabin in Tahoe or biking along the American River Bike Trail and around Folsom Lake. His parents lived in Carmi- chael, and as a teenager, he would bike from their house to Granite Arch Climbing Center in Rancho Cordova, where he start- ed training at 10 years old. “At the base of it, I just always loved movement,” he says.

At 18, he started training downtown at Sacramento Pipeworks, where he spent most of his free time.

Training for El Cap
Even though Honnold had dreamed about reaching the top of El Capitan his entire life, it took time to work up the courage to take on the challenge. “Year after year I fantasized, but it didn’t seem possible,” he says. “The climbing is really insecure; you feel like you could fall off on any move.

In 2008, he free-soloed Yosemite’s Half Dome and the Moonlight Buttress in Utah’s Zion National Park, gaining na- tional attention.

After a year and a half of training, Honnold reached the top of El Cap in just under four hours. A National Geographic Documentary Films crew captured his experience, which will air next summer.

Honnold hasn’t seen footage yet, but he’s excited to relive the experience, he says.

A Calculated Risk
Every detail of the climb was meticulous- ly calculated, from taking notes on his daily progress to memorizing each crevice and crack on the wall. The night before, Honnold had his bag packed and breakfast ready to go.

“It was all very automated. I was on autopilot,” he says, leaving no room for mistakes.

His hand-and-foot placements on the wall were memorized like a dance routine.

Other than the filming crew, his plan was kept secret from family, including his mom, a retired American River College professor, and his girlfriend, to spare them
a day of worrying.

Although he’s never had a fear of heights, he did have to overcome a crippling fear of public speaking (and spiders). In July, he appeared on “Jimmy Kimmel Live!” to talk about the climb.

Reaching the Finish Line
Reflecting on the experience during his climb was equally as satisfying for Honnold as reaching the top.

Most memorable was the last 500 feet— close enough to the finish line that he knew he was successful, but still enough time to enjoy the climb, he says.

“It’s a pretty heroic feeling to be charging to the head of El Cap,” he says.

Honnold says he most likely won’t repeat the same climb. Right now, he’s focusing on sport climbing—climbing on rock formations outside the gym—and expanding his book, “Alone on the Wall,” to include a chapter on his El Cap experience.