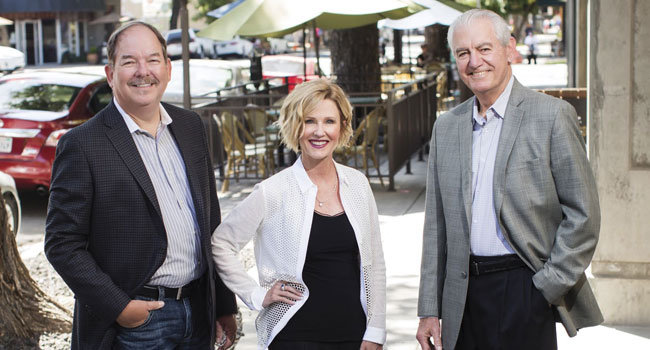 Dinner, drinks, a Los Angeles restaurant and celebrities. Sounds like the start to a big Hollywood deal, right? More like a big Sacramento deal. Next month, the Sacramento Walk of Stars will be unveiled, featuring five inaugural stars. It’s the vision of Scot Crocker and Lucy Eidam Crocker, owners of communications firm Crocker & Crocker, who came up with the idea a few years ago while having dinner with friends in Hollywood. “For fun, we started brainstorming people worthy of stars from our region,” says Lucy. “We quickly came up with about 40 people.”

Coming up with a list of names was the easy part. (Official criteria included having lived or been raised in the greater Sacramento region, having national or international significance, and having made a positive impact on the Sacramento region—and political figures were not considered.) However, making this vision a reality required another list of names, one of which was Steve Hammond, a founding board member and president and CEO of the Sacramento Convention and Visitors Bureau.

“Scot and Lucy realized early on that having broad community representation on the board would be the most impactful way of developing the celebration of these Sacramento icons,” says Hammond. “They put together an excellent group of people from all walks of life—pun absolutely intended.”

Fourteen influential Sacramentans in the arenas of public relations, accounting, development, real estate, nonprofits, media, manufacturing and local business development have been working feverishly on narrowing down the nominations, designing the terrazzo blue stars and preparing for the inaugural event at Memorial Auditorium on Aug. 31.

This year’s event will honor the first slate of honorees: LeVar Burton, Gregory Kondos, Debbie Meyer, Dr. Ernie Bodai and Timothy B. Schmit. Their stars will be embedded in the sidewalk along the corner of 18th and L streets.

“We decided on this midtown location because it’s surrounded by several restaurants, it’s one of the most pedestrian-trafficked sidewalks in Sacramento, and it’s a short walk from the Convention Center and Sacramento’s two largest hotels,” says Hammond.

But deciding where to put the stars was a lot easier than selecting who received them. “It was a really tough decision, since there are so many who are worthy in each of our categories,” says Eidam Crocker. “Our top priority was to showcase diversity, which is what makes the program truly unique.”

A 501(c)(3) nonprofit, the Sacramento Walk of Stars is funded by sponsors who see a value in boosting economic development and community pride. The plan is to add four to five stars every year around town, with the hope that it will inspire community pride, help energize public spaces and serve as a symbol of the region’s influence. “Next year, we’ll be considering a west end or downtown location to encourage visitors to move around the city and view our surge in visitor amenities,” says Hammond.

In the meantime, the Crockers will continue to add names to that master list.

THEY CAME FROM SACRAMENTO

Here are some of the famous folks who were considered for the 2016 Sacramento Walk of Stars: American actor, presenter, director and author, this Christian Brothers High School grad is best known for his roles in the award-winning miniseries “Roots” and “Star Trek: The Next Generation,” and as the host of the children’s series “Reading Rainbow.”

This alternative rock band emerged in the mid-’90s with its breakout hit “Rock ’n’ Roll Lifestyle.” Their signature sound of mostly spoken (and often comical) lyrics and playful trumpet riffs can be heard in chart toppers like “The Distance” and their kitschy cover of Gloria Gaynor’s “I Will Survive.”

A renowned Hollywood actress known for her roles in “Zero Dark Thirty,” “The Help” and “The Martian,” the former El Camino High School and Sacramento City College student won a Golden Globe in 2013 and has been nominated for two Academy Awards.

The alternative metal band formed in 1988 by four young Sacramento musicians—three of whom attended C.K. McClatchy High School—won a Grammy in 2001 for Best Metal Performance for the song “Elite.” They recently released their eighth studio album, “Gore,” in April.

A Sacramento-born screen and voice actor known for his deep drawl and thick moustache, he can be seen in many films, including “Butch Cassidy and the Sundance Kid,” “Ghost Rider” and “The Big Lebowski.” Last year, he was nominated for a Chicago Film Critics Association Award for his role in “Grandma.”

The actor, filmmaker and Sacramento Country Day School alum is known for his roles in “Orange County,” “Dexter” and “Life in Pieces” (currently on ABC). Last year, he directed “All Things Must Pass,” a documentary about the rise and fall of Tower Records. One of the country’s most prominent California-landscape artists, he is known for his majestic and tranquil use of color. He holds a lifetime achievement award from the International Biennale of Contemporary Art in Florence, Italy, and has been elected to the National Academy of Design in New York.

An actress, singer, Broadway star and author, this original Brat Pack member and Roseville native is considered one of the biggest teen stars of all time, thanks to her cult-classic roles in “Sixteen Candles,” “The Breakfast Club” and “Pretty in Pink.” This Sacramento-raised musician, singer and songwriter, best known for his work as the bass guitar player and singer with the Eagles, was inducted into the Rock and Roll Hall of Fame in 1998 and has collaborated with Bob Seger, Boz Scaggs, Don Henley, Toto and others.

He’s a Sacramento-raised novelist and screenwriter who graduated from Bella Vista High School. Eleven of his bestselling books have been adapted into films, including “The Notebook,” “A Walk to Remember,” “Message in a Bottle,” “Dear John” and “The Longest Ride.”

The Sacramento-based artist famous for his colorful paintings of everyday items such as cakes, lipsticks, paint cans and gumball machines has exhibited alongside Andy Warhol and Roy Lichtenstein and is part of the permanent collection at LACMA, SFMOMA and Whitney Museum of American Art.

â€‹The Sacramento-born journalist wrote a daily column for the San Francisco Chronicle for nearly 60 years. He won a Pulitzer Prize and was dubbed the “voice and conscience” of San Francisco. Part of the city’s Embarcadero is named after him.

Anchor of the weekday edition of “NBC Nightly News” and “Dateline,” the award-winning journalist attended Cordova High School and Sacramento State. He has also anchored for “Today” and “Weekend Today.”

A journalist, television host and author born and raised in Sacramento, she was a co-host on “The View” for three and half years before focusing on international reporting. She has hosted and reported for high-profile networks, including CNN, Oprah Winfrey Network and National Geographic.

The journalist, television host and author was born in Sacramento, began her broadcasting career on KCRA 3 and was the co-host of ABC’s “Good Morning America” from 1980 to 1997. She has written eight books in the autobiography, advice and cooking genres.

The business news anchor and radio host worked as financial editor for KFBK and KCRA 3 from 1980 to 2007, when he left Sacramento to become a host on Fox Business Network. His Fox News Radio show is nationally syndicated.

An award-winning cartoonist and creator of the strip “Wee Pals,” the first American syndicated strip with an ethnically diverse cast of characters, he created works that ran in more than 100 newspapers. He was also the inspiration for the “Family Circus” character Morrie.

This former MLB outfielder and current MLB manager for the Washington Nationals was drafted out of Del Campo High School, won the World Series as a player with the Los Angeles Dodgers in 1981 and led the San Francisco Giants to win the 2002 National League pennant as a manager.

She’s a two-time women’s basketball Olympic gold medalist and WNBA All-Star. She played for the Sacramento Monarchs from 1997 to 2004, during which time she played in three conference finals.

This former NFL linebacker played for Elk Grove High School and University of Arizona before he was drafted in the third round by the Chicago Bears in 2003. He played for the Bears for 12 seasons before retiring this past September.

The mixed martial artist, World Extreme Cagefighting Featherweight Champion and No. 3-ranked Ultimate Fighting Championship Bantamweight fighter was known as “The California Kid.” He owns and trains at Ultimate Fitness in Midtown.

A three-time World Boxing Champion, the Sacramento native retired from the ring with a record of 50-8-1 in 1999 and then started a bail bonds agency. He recently ran for mayor of Sacramento. A three-time Olympic gold medal-winning swimmer, the Carmichael native is the first and only woman to win three individual freestyle swimming gold medals in one Olympics—and did so in 1968 as a 16-year-old student at Rio Americano High School. This renowned Sacramento surgeon convinced Congress and the United States Postal Service to issue the Breast Cancer Research Stamp—the first-ever stamp in U.S. history to sell at more than face value. It has raised more than $80 million for breast cancer research.

She was president of the McClatchy newspapers, which included The Sacramento Bee, The Modesto Bee and The Fresno Bee. In addition to expanding the company to six daily newspapers, four radio stations and one television station, she was also an influential patron of the arts in Sacramento.

This developer made the 2005 Forbes magazine list of the nation’s wealthiest Americans. The fourth-generation Sacramentan’s success in building and commercial development—and the millions of dollars he donated throughout his life—helped shape much of the area.

He’s a businessman, investor and founder of the Charles Schwab Corporation, whose first branch was opened in Sacramento (where he was born) in 1975. His estimated net worth is $6.5 billion.

Founder of the worldwide music store empire Tower Records, which first opened on Watt Avenue, the Sacramento-born entrepreneur is also an avid art collector and was recently the subject of the documentary “All Things Must Pass.”