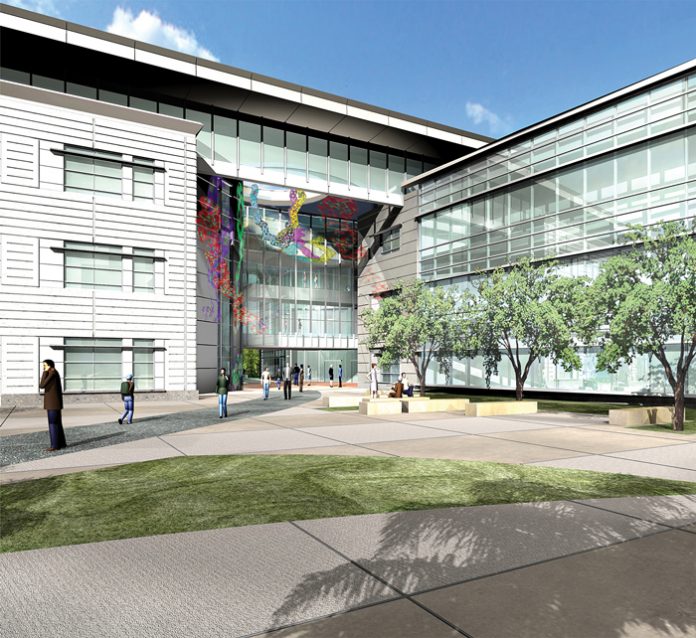 A lot of math goes into Roger Berryâ€™s metal sculptures, whether the Clarksburg artist is working with arcs and spirals or conical variations of sundials. His passion for number crunching is remarkable considering he flunked the subject years ago. â€œFor me, nobody ever made the connection between mathematics and the physical world,â€ he explains.
Â Â Â Â  Berryâ€™s work is on display throughout Northern California, from the grounds of the Crocker Art Museum (the 11-foot-tall â€œEclipseâ€) to Stanford University. Some of his most colorful works also are scientific: His 51-foot spiraling â€œPortrait of a DNA Sequenceâ€ (pictured above) hangs inside the life sciences building at UC Davis. This spring, heâ€™s installing a steel and colored-glass rendition of stem cell divisionâ€”a trio of 17-foot metal columns and 670 mirrored ringsâ€”at UC Davis Medical Centerâ€™s education building.
Â Â Â Â  Because of the heft, scale and cost involved in his art, Berry designs on the computer. Two welders work with him in his barn-turned-studio once itâ€™s time for assembly. A lumbermanâ€™s son, he spent his Sacramento childhood building soapbox derby cars. Later, in Oregon, he hauled scrap metal for pay and often passed a metal sculpture by the late American artist David Smith outside the Portland Art Museum. â€œIt was just so beautiful,â€ he says. â€œIt suddenly clicked.â€
Â Â Â Â  Berry showed his first sundials in San Francisco in 1980 and was lauded by a Bay Area art critic for his â€œvisionary expression using a severe vocabulary grounded in Constructivism.â€ In 1988, he and his wife moved to Clarksburg, where he tends a 20-acre vineyard. Grape-growing has influenced his craft. â€œIt has calmed me down and given me patience,â€ he says.
Â Â Â Â  Berryâ€™s work is exhibited locally at JayJay, 5520 Elvas Ave. Visit rogerberry.info to learn more.