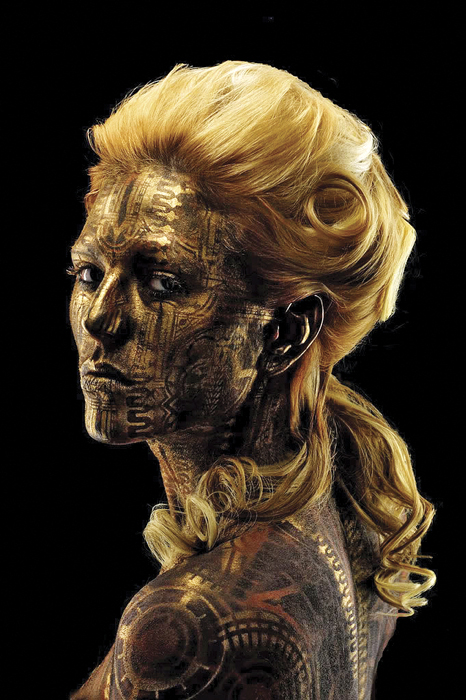 Michael Rosner is a body painter, and that’s just a fraction of his story. He paints his models in multiple layers and leaves it to local photographer Tim Engle to capture the process and stunning end result for near-perpetuity.
Rosner is an animal-skull painter, a plaster face-mask painter, a leaf painter—and, soon to come—an ostrich-egg painter. Recast in sequence, his body of work will capture the life cycle, from birth to afterworld.
“I’ve shown parts and pieces,” says Rosner. “But there’s a bigger global map to everything.”
Formerly a Roseville building plans examiner (he was laid off in May), Rosner now manages a tattoo parlor in Old Sac. He recently opened a gallery and studio space, Eye Level Studio, where he plans to exhibit his own work and the work of others.
If all goes as planned, a below-ground nightclub and a champagne bar slated for two floors up in Rosner’s building will showcase his artwork—mainly his collaborations with Engle.
Rosner, 34, grew up in a Chicago suburb and attended art school briefly. He painted his first body at that time but didn’t return to it in earnest until 2006. He paints women, mostly models, and mainly the upper body and face. Each work takes upward of 12 hours; one took 22. Each one is completely different, from pattern to color scheme.
Rosner has exhibited locally, and has gained a national following with the Gabriel album cover he and Engle recently completed for the techno-thrash band Believer.
The last thing you need to know: Adobe Photoshop is not involved, Rosner says, and you can check out myspace.com/michael_rosner for video to prove it.