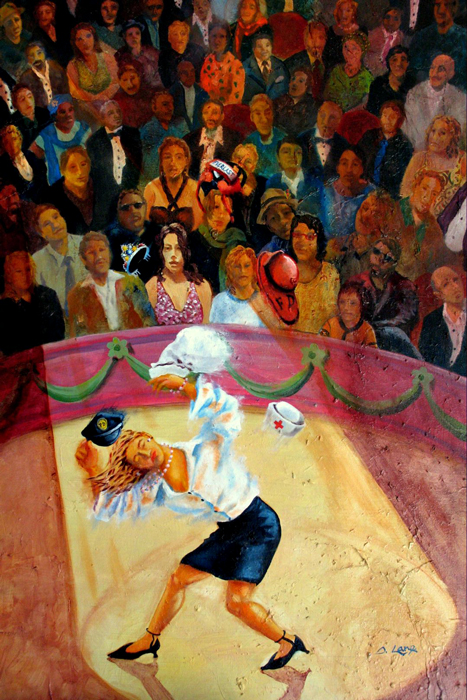 Few things raise James Patrick Lane’s hackles more than when people disparage his hometown, the Merced County berg of Livingston. It may have been small and rural, but the mélange of Portuguese, Chinese, Sikh and other cultures there fueled his wanderlust.
“From my earliest memories, there was this sense that there was a lot out there,” the Citrus Heights painter recalls.
As he came of age, Lane was off and running: first as a high school exchange student to Chile, later as an English teacher in Japan and a world traveler.
Now 41, he often finds artistic inspiration in his global adventures, whether depicting Thai lovers, Kazakh paramedics or Tokyo fireworks. Ever since Lane moved to the Sacramento area with his wife and family two years ago, the local landscape increasingly has figured into his works, from his depictions of Crush 29 in Roseville to Sunflower Natural Foods Drive-In in Fair Oaks. He’s even painted Moroccan hookah smokers in midtown.
“My approach is to see interesting things—and there’s no place that isn’t interesting,” says Lane, who works full time as a trainer for LifeMasters, a disease-management company based in Rancho Cordova.
Lane has painted all of his life but hastened the pace in 2001—the year his father died and his first child was born. He has taken part in 20th Street Art Gallery’s annual 50-50 Show and is a frequent Second Saturday exhibitor. He also keeps busy with commissions, mostly of local places. This month, he is off painting in Japan.
His technique—upside-down painting—is no less interesting than his subject matter. It is a necessary trick, he says, to keep his creativity flowing. For video clips of Lane’s technique and information on his upcoming shows, visit myartlane.blogspot.com.