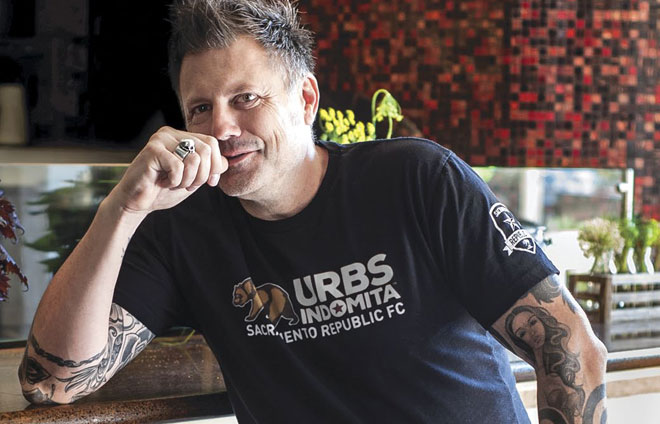 Right this minute, Chris Jarosz is arguably the busiest guy in Sacramento. The 47-year-old entrepreneur is in the process of opening, revamping or relaunching at least four restaurants and one food market—and that’s not even the half of it. He’s got ideas that could populate the local restaurant scene for decades.

Jarosz is probably best known for Broderick Roadhouse, the divey West Sac burger joint that he opened in 2012 with his business partner, Matt Chong. He already owned a successful food truck called Wicked ’Wich when he was approached about taking over the dilapidated restaurant in West Sac’s Broderick neighborhood. “It looked like a roadhouse from a Quentin Tarantino movie,” he recalls.

While it still looks like a biker bar, Jarosz and Chong managed to create a popular neighborhood watering hole with good food and a lively atmosphere. The place started attracting attention outside West Sac after it took the People’s Choice award at the 2013 Sacramento Burger Battle.

Impressed by Jarosz’s track record, the owners of two struggling restaurants came to him last year for help. Trick Pony, a wood-fired pizzeria in the old Tuli Bistro space at 19th and S streets, had been in business less than a year when management threw in the towel after scathing media coverage and diner indifference. Among the indignities, customers were expected to slice their own pizzas. Over on L Street, Capital Dime had gotten a better reception from reporters and customers, but it faltered after the departure of founding chef Noah Zonca. Jarosz came in to revive the existing brands but says they were too far gone to bring back. So he closed both restaurants and started from scratch. Trick Pony reopened in July with a new name, a new chef and a new concept. Now called Localis (Latin for “local”), it’s a dinner-only restaurant with a tiny menu of ingredient-driven dishes. Chef Chris Barnum (formerly with Roseville’s Cibo 7) works with local farms to source 90 percent of the menu locally, right down to the salt, made from San Francisco Bay saltwater.

While getting Localis on its feet, Jarosz was also juggling a trio of other restaurant openings. Saddle Rock was scheduled to open in mid-August in the old Capital Dime space, with 20-something chef Kevin O’Connor in the kitchen and a menu that mixes sophisticated fare with simple bar food. Across the street in the L Street Lofts building, Broderick Midtown is set to open any minute now in the space once occupied by Wahoo Fish Taco. It will be “a more sophisticated version of Broderick Roadhouse,” says Jarosz. “Basically, it’s Broderick 2.0.”

And later this fall, Jarosz will open The Patriot, a 5,000-square-foot restaurant and marketplace in Carmichael’s new Milagro Centre. A bit like Napa’s Oxbow Market, it will have food stations, including a pizza bar, a charcuterie room, a deli counter and a wine cellar. Also at Milagro, Jarosz is teaming up with Tequila Museo Mayahuel owner Ernesto Delgado to open a retail market, called Hunt & Gather, selling produce, meats and fish from local farmers.

Jarosz has ambitious expansion plans. Working with Bay Area investors, he’s looking to franchise the Broderick brand outside the Sacramento region, with Broderick Midtown as the template. Another goal: to open seven Hunt & Gather markets spread across Sacramento.

Whew. Jarosz says he has “50 more ideas” he wants to execute. Does he ever sleep? “No,” he says. “I don’t want to sleep. There’s so much opportunity right now. We have to seize it while we can.”