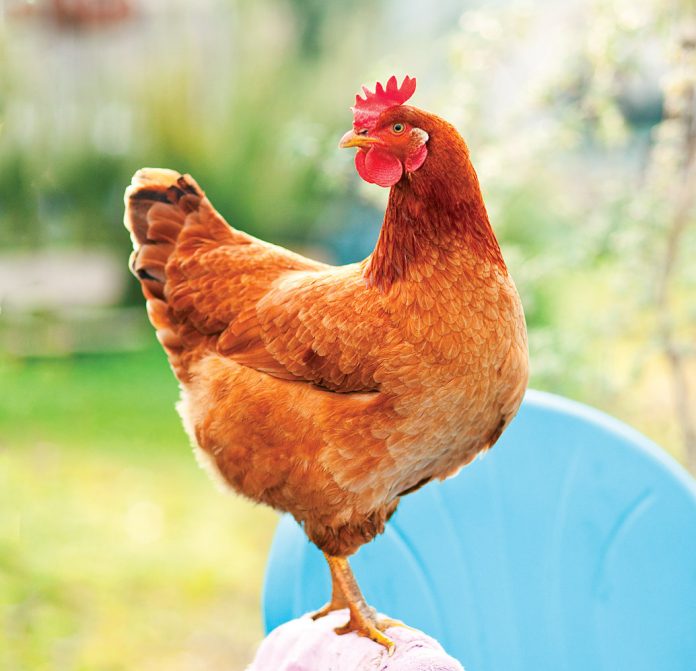 Three chickens are scampering around a grassy backyard in East Sacramento, blissfully unaware of one very inconvenient truth: They donâ€™t belong there.

Donâ€™t tell that to Jane, a Rhode Island Red with a bad foot. Or May, a Buff Orpington with shiny gold feathers and a taste for grubs. Or Misses Peepers, a feisty black hybrid of indeterminate breed. They officially are poultry non grata, thanks to Sacramento City Code Section 9.44.340, which makes it illegal to keep chickens within the city confines.

That didnâ€™t stop their owner. In October 2009, in defiance of the longtime city ban on backyard chickens, he went to Bradshaw Feed & Pet Supply and bought three baby chicks.

For this story, he asks that I use only his first name: Joe. He doesnâ€™t want to take any chance that some-one with the city will track him down and confiscate his birds. Joe has some reason to worry: In September, Land Park resident Victoria Aiken lost her backyard chickens after a neighbor complained to the city. â€œI know inspectors arenâ€™t out looking for chickens,â€ Joe says. â€œBut itâ€™s better to be safe than sorry.â€

Joe and Aiken belong to a group called CLUCK, aka the Campaign for Legalizing Urban Chicken Keeping. A grass-roots organization that claims close to 1,000 supporters, CLUCK has been working for more than a year to convince the City Council to overturn the backyard chicken ban.

Legal or not, there are chickens living in backyards all over the city. Here in Sacramento, as in cities throughout the country, urban chicken keeping has become increasingly popular, even chic. And not just with the 4-H crowd. These days, all sorts of city folk are raising chickens: animal lovers (who prize them as pets), locavores and Slow Food types (who dig the fresh eggs), and environmentalists (who see them as part of a sustainable lifestyle)
.
Joe falls into the animal-lover category. â€œHello, sweeties,â€ he says, stepping into the backyard to show me his little piece of chicken heaven. Leading me around the yard, he murmurs constantly to the chickens, the way you might talk to a much-love family dog. He scoops Jane up in his arms and pets her, then leans down to kiss her gently on the back of her neck.

Thanks to Joe, these three chickens are living the good life in East Sac. When they were just babies, they stayed inside his house, in a cardboard box with a heat lamp. At night, theyâ€™d sit on Joeâ€™s lap and keep him company while he watched â€œLostâ€ on TV. When they outgrew the box, they moved outside to a roomy, two-story coop that Joe had custom-built by a local carpenter.

According to Joe, chickens make delightful pets. He says his are friendly, easy to care for and quiet. They get along just fine with his two cats. And theyâ€™re fun to watch. To demonstrate, Joe walks toward the back of his yard. â€œCome on, girls,â€ he says. Looking rather comical, Misses Peepers and Jane race excitedly after him. Joe reaches down and lifts an old carpet remnant to expose some dirt, and the two birds peck and scratch at the dark-brown loam. â€œBugs,â€ he explains. Joe moves to another part of the lawn and they follow, waiting for him to lift up a stump. â€œOoh, that looks good,â€ he croons as the birds peck and scratch some more. When sheâ€™s finished, Misses Peepers lets out a contented â€œbwaaak.â€
Â
Joe heads over to the coop. â€œI bet we have an egg,â€ he says, sticking his hand in. â€œOh my, we have three eggs.â€ At dinnertime, Joe will come out and grab an egg to pop on top of a pizza or to make a quick pasta sauce. â€œThey give good eggs,â€ he says.

For this story, Michael Mier and Theresa Payant are willing to let me use their names, but theyâ€™d rather I not mention where they live. (Letâ€™s just say itâ€™s somewhere in the city.) Like Joe, they donâ€™t want to risk losing their contraband chickens.

Mier got his first pair a decade ago. Back then, he was single and living in a duplex in South Land Park, and he thought it would be fun to raise chicks. Heâ€™s been a committed chicken keeper ever since.

Over the years, heâ€™s raised eight of them. When he and Payant started dating about two years ago, he had a chicken named Flo. Payant was charmed. â€œ

She would run across the yard to say â€˜hiâ€™ to him,â€ says Payant. â€œI thought it was pretty neat.â€

Mier ran into a problem only once, when he accidentally got a rooster instead of a hen. â€œHe started crowing all day, every day,â€ says Mier, who sent him to live on a friendâ€™s farm.

When Mier and Payant moved into their current home, they asked their neighbors if they minded living next door to chickens. No one objected. For a makeshift coop, they used a childâ€™s playhouse they found discarded on the side of the road. Inside, they placed wood wine crates lined with hay as laying boxes for their two hens: a Brahma called Big Chick and an Ameraucauna called Little Chick.

Big Chick and Little Chick are free range; they have the run of the yard all day long. At night, Mier and Payant lock them up in the coop to keep them safe from urban predators such as raccoons. The two have distinct personalities. Big Chick is sweet and docile. Little Chick is more spirited. â€œShe gets worked up,â€ says Payant. â€œIn the morning, sheâ€™ll grab the bottom of my robe if she doesnâ€™t like what Iâ€™m doing.â€

The coupleâ€™s chicken routine is simple. In the morning, they let the birds out of the coop and give them food and water. Every couple of days, they clean out the coop and hose down the patio. â€œTheyâ€™re pretty good poopers,â€ Mier remarks. Heâ€™s heard of people who put diapers on their chickens. â€œThatâ€™s crazy,â€ he says.

Oak Park resident Tom Sumpter keeps two chickens in his rambling backyard. And he doesnâ€™t care who knows about it.

A neighborhood activist with a keen interest in sustainable living, Sumpter has been working with CLUCK to overturn the cityâ€™s chicken ban. When the effort stalled last year, Sumpter decided to en-gage in a bit of political theater: He got a pair of hens from an animal rescue group and invited the local press to his backyard for an official release party. â€œI thought: Letâ€™s turn up the heat,â€ he says.

Sumpter waited for someone from the city to notice his act of civil disobedience and come knocking on his door. But nothing happened. His birdsâ€”a pair of Rhode Island Reds he named Bonnie and Clydetteâ€”wander undisturbed around the backyard, clucking softly, as Sumpter describes for me his vision of a chicken not in every pot, but in every backyard.

â€œLook at the old victory gardens,â€ he says. â€œWith just a small garden and a couple of chickens, a family can eat very well.â€

Urban chickens are his solution to the problems of food safety and corporate control of the food supply. â€œKarl Marx said revolution is only three meals away,â€ says Sumpter, who calls himself â€œan old hippie.â€ â€œWe as a community will be stronger if we can get back to the old ways.â€

Sumpterâ€™s group, CLUCK, wants the City Council to allow residents to keep a â€œreasonableâ€ number of hens: somewhere between three and seven. Under the groupâ€™s proposal, roosters wouldnâ€™t be allowed. Residents would be required to pay a license fee, and slaughter would be strictly verboten. The group points to other cities that allow backyard chickensâ€”Portland, Seattle, Oakland and San Francis-coâ€”and asks why not here?

Sumpter, for one, is convinced it will happen. â€œIt just makes sense,â€ he says.