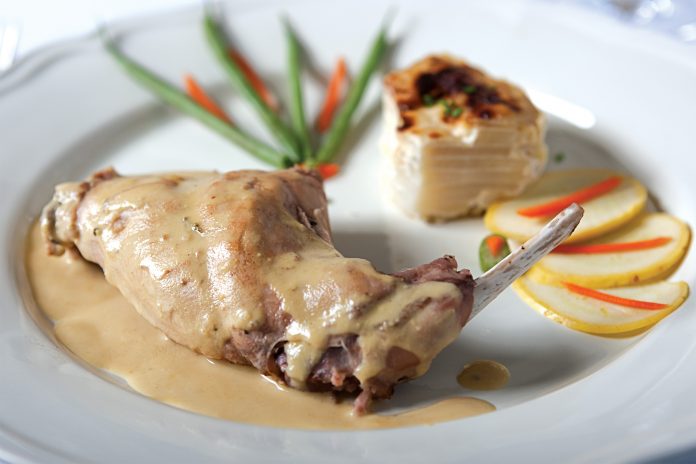 The well-known credo that the customer always comes first may prove to be at odds with the vision of chef/owner Daniel Pont at his new restaurant, Chez Daniel.

If you ever visited Pont’s downtown lunch spot, La Bonne Soupe Cafe, you will remember the slow, almost maddeningly methodical way in which Pont tended to every customer. Working completely alone, seemingly oblivious to the line snaking out the door, he carefully prepared each item, then shuffled to the register to ring the customer up before starting the process all over again.

People didn’t seem to mind; the endless waiting was an integral component of the Zen experience of eating at La Bonne Soupe. Pont’s deliberate, solo approach revealed a controlling nature and a staunch perfectionism that I couldn’t help but admire. It was clear that his food was his top priority, and his customers accepted that. The unenlightened, lacking patience for Pont’s High Art, could scurry to Subway, while the city’s foodies were willing to spend their entire lunch hour (and then some) waiting for a smoked trout sandwich and cup of cream of broccoli soup.

To the dismay of many, Pont sold his downtown soupery in April 2011. He reappeared, however, this winter with a new venture in Folsom: an intimate, white-tablecloth French restaurant. Small, subdued and staffed by a lone waiter, the space feels worlds away from his very urban, casual downtown cafe. But while the ambiance is startlingly different, Pont’s perfectionism is very much in evidence—this time, with less charming results.

My first interaction with Pont was via a telephone call, days after I had left a message asking for a reservation for seven people. He called to tell me that he couldn’t accept such a large party. Being completely alone in the kitchen, he explained, he couldn’t plate up the quality of food he wanted with that many people at one table. Disappointed, but again admiring his fierce commitment to his product, I thanked him and met my friends at another restaurant.

A week later, I left another message asking for a reservation for a party of two. Days went by and I left two more messages, then managed to get Pont on the phone the day we had hoped to visit. With a frosty edge to his voice, Pont told me he didn’t accept reservations on the message machine. I reminded him that his phone message makes no mention of this fact, that it’s difficult to get through to a live person, and that the restaurant has no website. Eventually, sounding reluctant, Pont agreed to put me on the list for that evening—“just because you called a few times.” I felt giddily successful, as if I had just been given a gift.

That afternoon, I saw a man on the street wearing a T-shirt emblazoned with the phrase “It’s my world—you just live in it.” Little did I know it would become the theme for my dinners at Chez Daniel.

That evening, once we were settled into our seats, the waiter explained how things would proceed. Pont, he said, would send out two different soups to the table, and they would be randomly placed in front of us. If we didn’t care for the selection chosen for us, or wished to try the other soup, “you can share with each other,” he suggested cheerily. (One evening, a woman at a table beside me politely asked the waiter if she and her husband could both have the French onion soup. “No,” he replied. “We don’t have enough.”) A house salad and dessert also were included in the meal, he noted. “You don’t have a choice,” the waiter said. “It’s whatever chef has decided to make.” Nodding like obedient schoolchildren, we selected our entrées, happy to be allowed to choose at least one of our four courses.

Pont’s soups (nicely shared, I might add, by all parties on both occasions) were terrific, though the comforting vegetable potage took a backseat to the intensely flavorful French onion soup. The straightforward green salad, delivered soon afterward, was dressed with a bracing, acidic vinaigrette.

Noteworthy entrées on my visits included Pont’s knockout New York steak, napped in a dreamy red-wine reduction with caramelized onions, and a lovely, fork-tender Muscovy duck breast with green peppercorns. Braised rabbit was tasty but came with an overly aggressive rosemary-mustard sauce, and a dish of prawns and scallops with lobster cognac sauce, though pretty, was somewhat rubbery.

Because Pont has no help in the kitchen, every entrée arrives with the same spare, fussily arranged accompaniments. Both times I visited, everyone received a lavishly creamy square of potato gratin and two vegetables. On one occasion, the carrot coins and floppy green beans were drizzled with butter; the second time, they were dry and unadorned.

Desserts included a stunning crème brûlée—perhaps the best I’ve ever eaten in the region—and a delicate, enticing flan, but the cherries jubilee was bland and liquidy. Again, not everyone received the dessert they wanted, and the waiter encouraged sharing.

I will follow Pont’s progress with great interest as he balances his single-minded focus on food quality with the desires of his diners. It’s a tightrope he may have difficulty walking in an economy where customers expect service that values their dining experience and meets their needs.