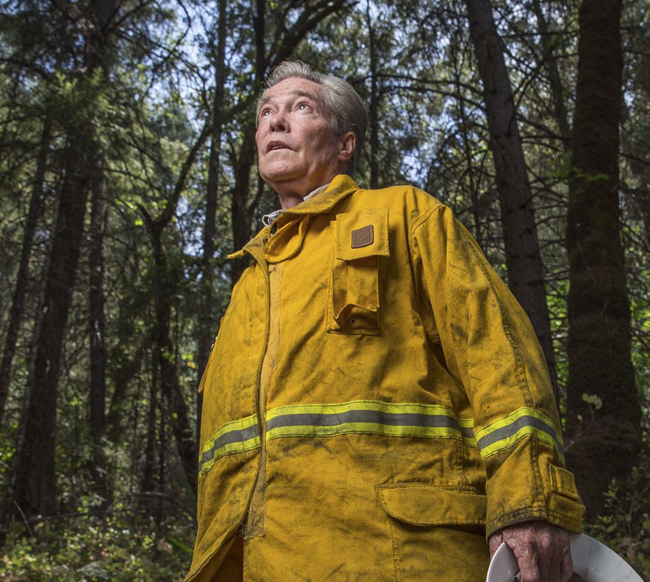 As the Kyburz wildfire spread east of Placerville in July, forcing mandatory evacuations, Dave Marquis raced toward the flames. But he’s no firefighter. A reporter for KXTV News10, Marquis is the station’s resident fire chaser, covering brush and forest fires from Tahoe to the Bay. During California’s wildfire season, which runs from June through October, he frequently hits the road to keep viewers informed about fast-spreading fires.

“This job was tailor-made for me,” he says. “I’m kind of an adrenaline junkie.”

Still, Marquis plays it safe. “I don’t take chances,” he says. To get close to the action, he dons flame-resistant Nomex, a heavy material worn by firefighters. “We pretty much buy what Cal Fire has,” he explains. Under his gear, Marquis dresses casually, just jeans and shirt. “You want to be comfortable under the Nomex, and long sleeves give you a little more protection when the heat really starts to cook.”

Marquis aims to get as close as he can to the fire’s front lines. “These fires can be extremely dangerous,” he says. “It’s amazing more people don’t get hurt. But my idea of covering a fire is you don’t sit there with a long lens from a mile away. You show what [firefighters] are doing to protect homes and property.”

Since the beginning of California’s historic drought, he’s reported on more fires than ever. “Cal Fire has had twice as many fires [this year] as the year before,” says Marquis, who by early August had already covered 25 fires. “That’s an enormous increase, and the drought is seriously responsible. After four years, the fields are tinder-dry and ready to blow up. And if there’s a wind, it’s off to the races: You’ve got a monster fire.”

As he drove east on Highway 50 toward the Kyburz fire, Marquis noted that “this is my second fire this week and it’s only Thursday.” Pause. “Oh boy, here comes the fire downhill now. Why is the fire coming this way?” And then he was off to the races, chasing flames and reporting the news.

FIRE BY THE NUMBERS

146,279
Acres of land that had been destroyed by wildfire by August—more than double the average for a fire season

$209M
California’s fire budget for fiscal year 2014–15, all of which was burned through by September

The state fire budget for fiscal year 2015–16 has been LOWERED to $114.9 million. The number of fires is expected to INCREASE.

500+
Number of homes burned in Amador and Lake counties during the second week of September during the Butte and Valley fires.