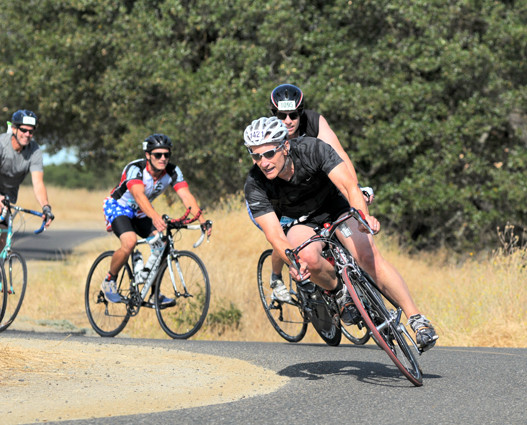 After 45 successful years, Eppie’s Great Race, a Sacramento summer tradition and the world’s first modern “no swim” triathlon, will finally reach its own finish line—but not before having raised over $1 million for Therapeutic Recreation Services. Since 1974, the race—which includes a 5.82-mile run, a 12.5-mile bike and a 6.1-mile paddle—has taken place along the American River Parkway. For Sacramento resident Jeff Holden, 61, the end of Eppie’s is the end of an area, and having run Eppie’s 31 consecutive times, he’s likely to feel that loss as much as anybody.

How did you first get involved in Eppie’s?
I moved to Sacramento in 1985 and first ran Eppie’s in 1986. I was in the radio business, and there was this guy Eppie who said, “I need help for my event.” Usually when Eppie asked, he found a way to get you to say yes. He was just a great, iconic character in the community, so I thought, hey, this is a cool thing, and I’m going to do it.

Had you run any races before? Were you prepared for a triathlon?
I was just a casual weekend-athlete kind of guy. I didn’t have a kayak, didn’t even know how to kayak, or what to do with it once you stuck it in the river. There were times when I went down backward through the rapids, and though I didn’t know what I was doing, I said next year I’m going to do better.

Did you get better?
You get a better bike, a better kayak, but it’s the older guys that are still winning the thing: the same guys that have been winning it 10, 12, 14 years. They just aged well and continue to be competitive. Unfortunately that’s my class.

So why keep running it?
Well, it’s such a community of camaraderie that it really isn’t about competition. But somewhere after 20 years, I thought, man, 20 years, that’s a lot. I may never win the damn thing, but you know what, I’ll be the longest-running consecutive guy. Now I’ll always do the race even if I have to crawl.

That sounds a bit like, well, an obsession.
It is—oh, it is—an obsession! Think about it: 31 years. For many people, that’s a lifetime relationship with someone. But it wasn’t just about running. I was on the board for a while; I was on committees. It’s more than just a race. It became a community event that you wanted to support in a variety of ways.

After 31 years, is there any particular year that stands out?
Last year I turned 60, which happened to be my 30th consecutive race. So half my life I’ve done this—interesting, right? So I had all these aspirations for it to be the big year, and I’m going to do great, and then Easter Sunday I feel off a ladder and crushed my hand and broke my arm. Plates and pins and all kinds of stuff. I thought maybe this isn’t going to be a very good year after all, but then it ended up being my best race ever. But not because my time was great—there just happened to be less guys in the class.”

So how do you feel about this being the final race, especially after 31 years?
It’s a sad event for all of us in some way, shape or form because it’s the end of an era. Eppie passed away a few years back and that was a real, real tough year. In a way, that was the beginning of the end, and here we are at the last one. That’s a bit of emotion involved, because, wow, I’ll never do this again. It’s been my summertime thing every year.

Its end is probably the only thing that could stop you, isn’t it?
Yeah, I don’t know what I’m going to do in July now—though I could never before do the Death Ride, which is in the Sierra. It always took place the week before Eppie’s, and I never wanted to mess that up. But next year, it’s on my to-do list.

Any special plans or goals for the grand finale?
To make sure I get down the river upright! To train a little more aggressively, and to have a good time—in minutes but also with the people. I think it’s going to be a sad event. I think we’re all going to sit there with a little remorse and reflection and say, “That was really something.”