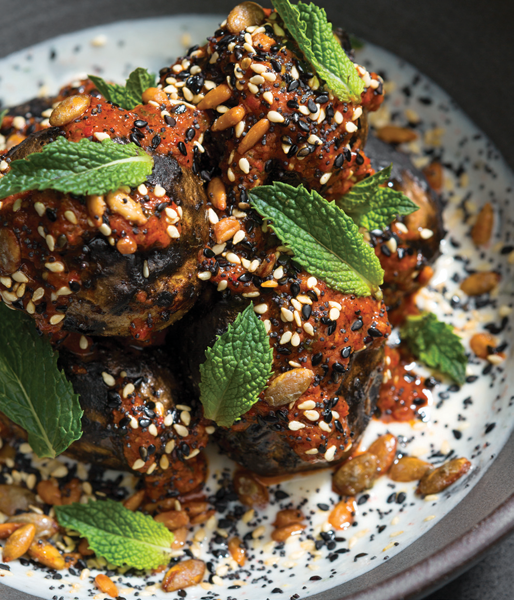 Since caveman days, people have been gathering around fire. Beast + Bounty is counting on that attraction. A wood-burning fire is the drawing card at this slick new restaurant from Michael Hargis, the man behind LowBrau Bierhalle and Block Butcher Bar.

The heart and soul of Beast + Bounty is a 7-foot-long Argentine-style grill. There, meats, vegetables and even desserts are cooked over a live fire using a mix of woods: oak for flavor, almond for heat. The kitchen employs ash, smoke and char like ingredients to give each dish its distinct personality.

For instance, spring onion tops are grilled, dehydrated and turned into an ash that coats a log of vegan cheese. The cheese itself—made from pureed cashews and almonds—has been hung over the grill to pick up the taste and aroma of smoke. That cheese ultimately ends up on a pizza baked in a wood-burning oven.

Located in the Ice Blocks development, Beast + Bounty exudes a cosmopolitan hipness not normally associated with Sacramento. Its neighbors include West Elm, Warby Parker, Device Brewing Company and Philz Coffee. The interior, designed by Hargis, is both beautiful and handsome at the same time. Local artisan Steven Tiller built the white oak tables and the soft, peachy leather banquettes. Wood beams, hand-troweled stucco walls and white oak flooring laid in a herringbone pattern add to the quietly lush ambience. The light fixtures, from Lumens and Scout Living, are chic and modern. Tables are set with gold-toned flatware and rustic-looking hand-thrown dishes from well-known Portland ceramist Alexandria Cummings. The pale-pink water glasses look high end but are actually from Ikea. Brock Macdonald, the chef at Block Butcher Bar, oversees the kitchen. While doing research for Beast + Bounty, he and Hargis visited restaurants in Los Angeles and Portland. They found inspiration in the wood-fired cooking at Portland’s Ox and the food-to-go program at the highly regarded Gjelina in LA’s Venice neighborhood. (They plan to deliver food to the residents of Ice Blocks and customers at nearby Device Brewing.) Meat and vegetables get equal time at Beast + Bounty. Yes, you can order a grilled rib-eye or a pork chop. But if you don’t eat meat, you don’t have to suffer. Macdonald—who’s been doing snout-to-tail cookery for years at Block—has added leaves-to-root cooking to his repertoire. A meaty-tasting carrot dish features numerous techniques and textures: roasted baby carrots served with carrot powder (made from the peel), carrot crumb (made from the juice), pickled carrot puree and salsa verde (made from the carrot tops).

Desserts are the province of Edward Martinez, who once worked at Michelin-starred restaurants Bistro Jeanty in Yountville and Lazy Bear in San Francisco. Using the wood-burning grill, he smokes chocolate and fire-roasts fruit. An exquisite-looking sweet called “The Donut” features a pickled and roasted peach served with sweet cream and fennel fronds. Outside the restaurant, a bocce court beckons with seating for people who want a cocktail and a bite to eat. It’s vibrant and lively—a new type of restaurant for Sacramento’s new Ice Blocks neighborhood.