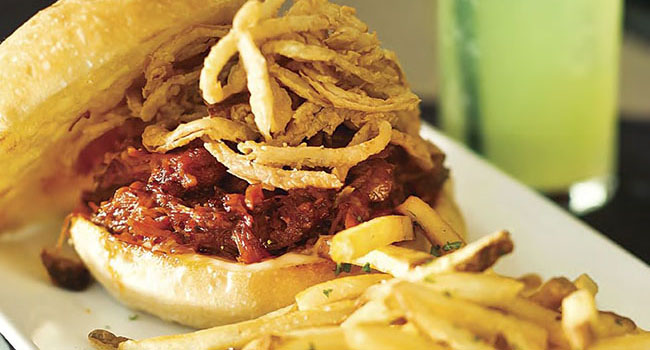 Restaurant kitchen work is sweaty, intense and competitive. Any cook who has toiled long enough in hot, busy kitchens to earn the title of chef not only has developed a tough skin, but has likely passed through a number of food establishments to get there.

Not Noah Zonca, who recently opened Capital Dime in midtown with partners Rick Lobley and Melissa Sanchez after spending two decades in a single restaurant kitchen. And not just any kitchen, but The Kitchen, Sacramento’s lauded, demonstration-style eatery, which charges upward of $200 a head for its distinctive, award-winning meals.

Zonca, who rose from dishwasher to chef de cuisine during his lengthy stint, was exposed to the highest quality ingredients and cooking equipment available to a Sacramento restaurant. He contributed to The Kitchen’s complex, innovative dishes, and as chef de cuisine he emceed the interactive dinner shows in the same theatrical style as founder-owner Randall Selland.

Zonca’s vision for Capital Dime is a far cry from his former employer’s. While continuing to concentrate on seasonal, locally sourced fare, Zonca has crafted a menu whose entrée prices topped out, on opening night, at $15.

The feel of the place is similar to its past incarnation as L Wine Lounge & Urban Kitchen. The heartbeat of the restaurant is the lower lounge and dining area, dominated by a lively bar that fronts L Street. Climb a set of stairs, however, and you’re suddenly in the restaurant’s loft, a disconnected, slightly claustrophobic space where you can hear the merriment below. If there is such thing as a restaurant purgatory, I think this might be it.

The menu is disarmingly simple. It’s divided into Dime Plates (small, shareable dishes for $10 a pop), Rabbit Food (salads, also $10), Sandwiches ($13) and Plates, which, at $15, are the restaurant’s limited lineup of entrées. (At press time, Zonca was preparing to add a selection of $20 entrées.)

The one category you won’t see on the menu, however, is desserts—because the restaurant doesn’t offer any. Each diner receives a house-baked chocolate chip cookie at the end of the meal, with a speech from the waiter explaining that, because the restaurant shares a city block with Ginger Elizabeth Chocolates, TreyBcakes and Yogurtagogo, it would rather support its dessertproducing neighbors than compete with them. The explanation was less than satisfying on a recent Sunday night, when both the chocolate shop and the bakery were closed and we wanted to linger over something sweet with our coffee.

On my first visit, three of the four dishes I tried were overwhelmingly heavy and rich. Steamed clams with chorizo was nice in concept, but the dish contained so much chorizo that it was overly salty and had an unappetizing layer of orange oil floating atop the broth. Noodles in a Green Dress, inspired by a favorite childhood dish of Zonca’s called noodles in green dressing, had a thick, creamy basil sauce that was redeemed somewhat by the addition of brightly flavored cherry tomatoes and corn. Interestingly, on later visits, both dishes were prepared with a much lighter hand. The clam/ chorizo balance was appropriate and appealing; the cream sauce on the noodles was livelier, and the dish had more vegetables. I’d like to think the kitchen listened to customer feedback and responded, which is a great sign for a new restaurant.

There are a number of gems on the menu, including the creamy Capital Mac and Cheese, made with smoked white cheddar and housecured bacon. The Kalua pork sandwich featured moist, sweet meat, and the Caesar salad had a first-rate, tangy dressing. The calamari was wonderfully tender and served with a feisty sauce made with fermented chili paste.

I relished the fried chicken tenders tossed in a sauce made with wildflower honey and black truffle paste. And I would certainly order the robust house-smoked pastrami sandwich again, especially if it came with the same ravishing cup of heirloom tomato soup. Capital Dime’s kitchen is clearly finding its footing, and it appears Zonca is getting used to his new role as a proprietor. On my three visits, I saw him moving from table to table, chatting with diners. (He places his confidence in chef Juan Vaca and chef de cuisine Ruben Perez to crank out the dishes.)

With its mix of restaurants, art galleries and boutiques, midtown is the perfect neighborhood for Zonca’s ambitious venture. Re-energizing a space that stood vacant for close to two years, Capital Dime offers an entertaining new dining option.