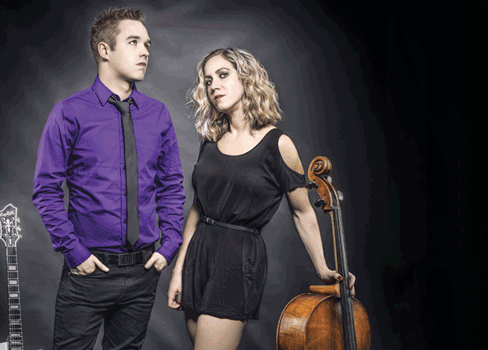 Alternative cello, guitar and vocal duo Calling Tempo is Krystyna and William Taylor. Krystyna, a classically trained cellist, fell in love with music in fifth grade and started playing gigs by eighth grade, before getting a full scholarship to study cello performance at Sacramento State. Across the world, William began playing guitar with friends in high school, inspired by the classic rock of Led Zeppeli.

Following a serendipitous meeting at a friend’s apartment in Scotland, William, from Glasgow, and Krystyna dated intercontinentally before getting married in 2003 and setting down roots in Sacramento. After years of playing other’s songs, William, a contented bedroom guitar player, began to feel a pull to write his own music, then Calling Tempo was born. The band played its first show in March 2014. William writes 100 percent of the lyrics and the couple collaborates on the music.

“We are lucky that we are married, so scheduling practice time is not really a problem,” says William. “We play during commercial breaks.”

Marrying the cello and guitar turned out to be a slightly greater challenge. “In the beginning, it was difficult to get the two instruments to play nice together,” says William, who chose the electric guitar to give the band a more rock, less folk, bend. The band is blown away by its fan reception. In 2015, Calling Tempo was nominated for a Best New Artist Sammie award.

“I thought it was totally awesome and totally unexpected,” says Krystyna.

Fans can look forward to the band’s debut EP, expected later this year, and an upcoming performance at Old Ironsides on June 13.