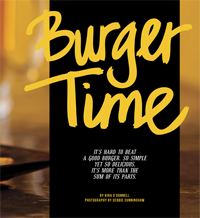 What’s more American than the hamburger? This culinary icon is deeply embedded in our culture. It’s been immortalized in countless movies and television shows. (Who could forget Samuel L. Jackson’s Big Kahuna burger commentary in “Pulp Fiction”?) Since we’re a nation of individuals, it seems fitting that the variety of hamburgers available is as colorful and wide ranging as our imaginations will allow. Whether you’re hungry for a traditional burger or something out of the ordinary, there are many appetizing choices available in the Sacramento region.

THE BEST BURGER I EVER ATE . . . “ Ryan Farr’s burger at 4505 Meats at the San Francisco Ferry Building farmers market. The guy’s an incredible butcher. He salts the grind before making the patty. It’s the epitome of what a burger should be.” —Michael Thiemann, Mother Meaty in texture and rich in flavor, the portobello mushroom is an ideal substitute for a beef patty. Burgers & Brew takes the time to grill the portobello, giving it a smoky edge, then partners it with zesty roasted red pepper mayonnaise for added flavor. It’s piled with lettuce, tomato, onions and pickles, making it the closest you’ll get to a “real” burger—minus the meat and cholesterol. Feeling naughty? Add a side of the restaurant’s crispy garlic curly fries. 1409 R St.; (916) 442-0900; and 403 Third St., Davis; (530) 750-3600; burgers-brew.com

Pick your way through flocks of clucking chickens in the parking lot at Sunflower Drive In and order a Super Nutburger—it just may convince you to give up meat completely. A yummy “nutmeat” patty is placed into pita bread stuffed with alfalfa sprouts, lettuce, ripe tomato slices and chopped white onion. Moistened tangily with yogurt sauce, this burger radiates freshness and nourishment. You can’t help but feel virtuous after consuming it. 10344 Fair Oaks Blvd., Fair Oaks; (916) 967-4331; sunflowernaturalrestaurant.com

Tower Cafe’s claim to fame may be its outstanding French toast, but the well-loved restaurant also plates up a delicious nonmeat Earth Burger. The loosely packed, wonderfully textural patty is crafted from rice, Gouda cheese, roasted nuts and caramelized onions—a treat to nibble on even by itself. And it’s generously garnished with the traditional fixin’s on a whole-wheat bun. 1518 Broadway; (916) 441-0222; towercafe.com

There are many reasons to make the trek to Ikedas in Auburn. (Did someone say “Dutch apple pie”?) But the best one may be its eye-poppingly enormous Ultimate Big Burger, designed especially for Paul Bunyanesque appetites. This behemoth contains not one but two beef patties, stacked carefully on a toasted French roll with thick bacon slices, avocado, soft grilled onions and aromatic sauteed mushrooms. Melted cheddar cheese and Ikedas’ “special sauce” add further excitement, and the burger is finished off with lettuce and fresh tomato. Personally, I wouldn’t attempt to tackle this one alone; I’d rather share it with a fellow burger fanatic. 13500 Lincoln Way, Auburn; (530) 885-4243. At Mama Kim Eats, many of chef Kim Scott’s Creole-influenced dishes have a feisty edge and an innovative twist. So as you might imagine, the sliders are out of the ordinary. The rounded patties are a mixture of lamb and a small amount of spicy sausage, which gives the meat a lustier, fuller flavor than traditional sliders. The miniature patties are topped with melted Gouda cheese and a liberal lashing of frisky Creole relish. Plopped on light, pliable, doll-sized Acme buns, the sliders get a peppery hit from the addition of fresh arugula and are served with addictive sweet-potato chips. 1616 Del Paso Blvd.; (916) 515- 9971; mamakimcooks.com

“ It was an ahi tuna burger with wasabi aioli at The Beach Club at Pebble Beach. They froze the patty in nitroglycerin, then cooked it, so it was seared on the outside, raw on the inside. It caught me off guard. I was expecting something a little more country clubby.”—Ed Roehr, Magpie Cafe

This captivating dish has been a favorite of Esquire Grill customers for years. A sturdy, sesame-speckled bun is lavished with spicy soy mayonnaise, then stuffed with a meaty ahi patty, a lively layer of pink pickled ginger, whisper-thin slices of red onion and a pile of zesty, dainty daikon sprouts. Staffers recommend that you order the burger medium-rare; and I recommend that you choose the unapologetically buttery mashed potatoes as an accompaniment to this unique burger. 1213 K St.; (916) 448-8900; paragarys.com Burgers rule at Broderick Roadhouse, a cozy and appealingly scruffy dive bar/restaurant in West Sacramento. In addition to the kitchen’s juicy beef burgers, there’s also a selection of more avant-garde versions, including the intriguing Duck Burger. The black pepper-encrusted ground-duck patty is dressed in a temptingly crispy cheddar cheese “skirt” and topped with a handful of fresh arugula and crusty fried onions. Garnished with both a fruity, complex roasted pear and fig chutney and garlic aioli, this is a burger for the intrepid. 319 Sixth St., West Sacramento; (916) 372-2436; broderick1893.com How many people know that Tapa the World doesn’t just serve Spanish tapas; it makes a rockin’ burger as well? The Tapa Burger is served on a tender roll, and its ground-chuck patty is blanketed in a lovely melted sheep’s milk Manchego cheese and a delightful pile of sweetly caramelized onions. A velvety smear of garlic aioli gives it a distinctive zing, and lettuce and tomato add a refreshing note. Pair this hefty gem with a glass of Tapa’s fruity sangria. 2115 J St.; (916) 442-4353; tapatheworld.com

If you’re a blue cheese fan, check out the Blue Burger at East Sac’s Clubhouse 56. This convivial sports bar cranks out some first-rate burgers, and the Blue is one of its best. A beautifully cooked patty is coated with a thick layer of mild, melted blue cheese and placed in a slightly chewy, smooth bun. Sweet, thinly sliced red onion is a nice foil for the saltiness of the cheese, and fresh tomatoes and lettuce give the burger a bright pop. I’m fond of the robust, wonderfully seasoned steak fries that accompany the burger, and the whole ensemble cries out for one of Clubhouse 56’s draft beers. 723 56th St.; (916) 454- 5656.