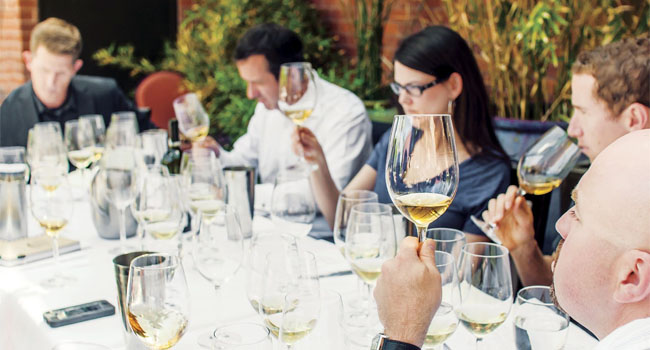 Drinking wine from a brown bag is not the sort of behavior one typically expects from a sommelier. But for a small group of Sacramento wine professionals, it’s a crucial part of their education.

Every Monday, four to six wine stewards, many of them preparing for the tasting portion of high-level sommelier exams, gather for what they call brown-bag blind tastings where they formally assess wines from around the world. Think of it as a study group for the taste buds.

“We go through a deductive tasting grid and try to establish what the wine is without actually knowing what it is,” explains The Kitchen’s Ryan Bailey, a co-founder of the group. “Every single wine has some form of marker to tell you what it is.” The taster’s task is to determine whether it’s an Old World or New World style; what country and type of climate it’s from; and what vintage and varietal it is, among other things.

“It’s fun, and it’s educational. You’re surrounding yourself with like-minded people who want to push themselves and train their palates in a very specific way,” says Bailey.

“There are a lot of wine drinkers in Sacramento, but there aren’t a lot of people who take it as seriously as we do. It’s nice to have people you can get together with and just geek out about wine,” says Sacramento sommelier Kara Sheffield. “My blind-tasting skills have been honed considerably.”

Even if you’re not cramming for an exam, blind tastings are a fun way for wine drinkers to make new discoveries. “I know some people who have parties where everyone brings [wine in] a brown bag and they vote on which one they like the best,” says Sheffield. “I think it helps people determine what they like, and it exposes you to different things.”