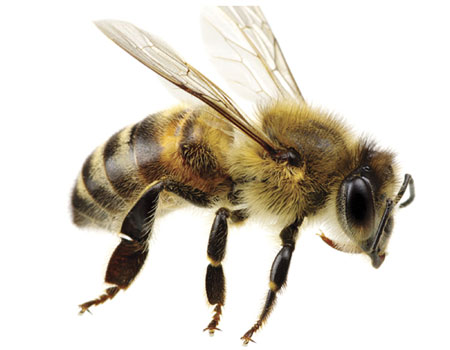 There’s a lovely outdoor garden in Davis, not far from the university, where birds sing and honeybees, the pollinators of California’s melons, apricots and avocado crops—among many others—flitter from rosemary shrubs to manzanitas, soaking up droplets of nectar. They meander over to the passion fruit flowers to collect more grub for their hive. Now, in the middle of winter, they have this place all to themselves. They come out if the day is sunny and the temperature rises above 55 degrees. In February, the bumblebees arrive.

This garden, the UC Davis Häagen-Dazs Honey Bee Haven, provides a half-acre food source for bees. Just like people, bees need a diverse diet, so the more flowers the better—hence the 200 plant species grown here. Opened in 2009, the garden is named for a company that uses pollinated ingredients in many of its ice cream flavors.

California has 1,600 species of native bees. About 300 types of bees are indigenous to the greater Sacramento region, and about 85 of them have been observed in this garden. Honeybees—transplants from Europe (and originally from Asia)—may be our most famous pollinator, but they can’t do it all. Wild species, like the bumblebee, also perform some heavy lifting. “In this area, the tomato is our iconic crop,” explains Christine Casey, the entomologist who oversees the garden. “But honeybees can’t pollinate tomatoes.” They can’t access the tomato’s hidden pollen, while the bumblebee vibrates on the flower to release the pollen; it drips out and coats the insect that then flies away.

Bees pollinate roughly one-third of the fruits, vegetables and nuts we consume, so they are critical to the global food chain. As bees gather pollen and nectar to eat, they deposit pollen on apples, cherries, blueberries, cucumbers, broccoli and many other crops, thereby fertilizing them. Without pollination, yields for some crops, such as persimmons, would sharply drop, while others (almonds, for example) would fail completely. That’s why UC Davis is trying to solve a confounding mystery—the disappearance of honeybees—to ensure we all have food to eat 10, 20, 50 years from now. And, it turns out, each of us can also play a role in saving the bees. We need the bees

In 2006, adult worker bees throughout the United States began to mysteriously abandon their hives, leaving their queen, immature bees and honey behind. This phenomenon was dubbed Colony Collapse Disorder. Commercial beekeepers initially reported hive losses of between 30 percent and 90 percent, according to the U.S. Department of Agriculture. While colony losses attributable to CCD appear to have subsided somewhat, honeybees still are dying at scary rates.

Over a 12-month period in 2014–2015, commercial and small-scale beekeepers in the United States lost 42 percent of their honeybee colonies, according to a ninth annual survey conducted by the Bee Informed Partnership. Some losses are normal, but the loss is far more than what beekeepers consider economically acceptable. Encouragingly, winter losses—when die-offs usually occur—decreased, but summer losses surpassed those of winter. California reported a 40 percent loss of colonies.

California farmers are paying close attention. While staple crops such as wheat, corn and rice don’t rely on insect pollinators, plenty of the 400 other agricultural commodities produced here do. That includes many fruits and vegetables, cotton, alfalfa hay for dairy cows and—the most prominent one—almonds, a crop completely dependent on managed honeybees for pollination. In fact, the majority of U.S. commercial hives are used for our state’s almond bloom. If bee populations continue to decline, the ripple effect could spell disaster. Almonds are California’s second most valuable agricultural commodity (after milk); we produce the bulk of the global almond supply.

The good news: In Sacramento County, bee losses don’t seem to be dramatically affecting farming. The county’s agricultural production in 2014 reached its highest value ever at $495 million. While one of the region’s top-five crops, Bartlett pears, directly relies on pollinators, the other four do not: wine grapes, milk, poultry and cattle. Meanwhile, tracking bee colony loss in the region is difficult: Many small-scale beekeepers don’t register their hives with the county agricultural commissioner, as they’re supposed to.

Why are bees dying?

It’s complicated. One possible cause involves neonicotinoids, a class of insecticides used to coat seeds that may poison bees. The varroa mite—a parasite that attacks honeybee colonies—is also a culprit. In California, drought may play a role in declining bumblebee counts. (Lack of rain means less forage.) Habitat loss is another worry, as land gets paved over for development and farms don’t always grow native vegetation where beneficial insects flourish.

Soil Born Farms, along the American River Parkway in Sacramento County, shows what can happen when adequate habitat is provided. The farm hasn’t experienced any bee losses. “The hives on the farm come and go, and we actually rely mainly on native pollinators,” says farm co-director Shawn Harrison. “Because we are in the parkway and relatively protected, there seems to be a healthy environment for pollinating insects here.”

In March 2015, the Sacramento city council designated us a “Honey Bee Haven” and launched a public information campaign on being bee-friendly. Other cities have banned certain pesticides that may threaten bees. Councilman Jeff Harris, a veteran beekeeper of 43 years, asserted the importance of bees. “Our very economy here in Sacramento depends on honeybees, and we have taken on the identity of the farm-to-fork capital,” Harris says. “That would be more or less meaningless without honeybee pollination of our crops.”

Hobby beekeepers and urban gardeners can do their part to help honeybees and wild bees alike. The expanding Sacramento Area Beekeepers Association suggests a budding interest in urban beekeeping; the association has gone from about 30 members a decade ago to nearly 200 today. Within Sacramento city limits, it’s legal to keep two hives per residential lot.

Sacramento Beekeeping Supplies on X Street has seen increased sales among beekeeper hobbyists. “I think many people who have thought about keeping bees have been motivated to start now because of (Colony Collapse Disorder),” says owner Nancy Stewart.

Most visitors to the Häagen-Dazs Honey Bee Haven in Davis don’t necessarily want to keep their own hive but want to learn how to attract wild bees to their yards. Casey wishes more people would follow suit, and not fret about getting stung. “It’s frustrating for all of us that work with bees,” she says. “They are not aggressive. They are defensive. If you stick your hand in a beehive, yes, you’d get stung. But really they’re interested in protecting their food source.” Bees aren’t a nuisance: They are a necessity.

UC Davis scientists are also on the case. Next door to the haven is the Harry H. Laidlaw Jr. Honey Bee Research Facility. Founded in 1969, this is the only state-supported apiculture facility (a place where honeybees are managed and studied) in California and the largest in North America. The 8,200-square-foot facility contains observation hives, six laboratories and lots of other tools to help these researchers do what they do best: use genetics to learn about bees. The facility is named after Harry Laidlaw, an entomology professor at UC Davis from 1947 to 1974.

Entomologist Neal Williams is studying how to improve pollinator habitat on farmland. Brian Johnson, another researcher, is examining the honeybee immune system and the causes of Colony Collapse Disorder. Professor Emeritus Robbin Thorp is interested in the foraging behavior of bees. Elina L. Niño, an apiculturist, is trying to combat varroa mites. She’s testing biopesticides (derived from natural materials) to control the mites. If they prove effective, beekeepers can use these methods instead of synthetic insecticides. Niño is also working to manipulate the ways bees mate so they’ll produce offspring that are resistant to pests and toxins.

Ultimately, the researchers want to build a stronger, healthier honeybee. Their research is used to develop practical tools and management guidelines for farmers and commercial beekeepers. The facility also hosts beginning beekeeper courses open to the public.

Niño says there’s no time to waste and we must all get involved in saving the bees. “People should be really worried and concerned about the loss not just of honeybees, but of pollinators in general,” she says. “We could probably survive on just grains, but the foods we would no longer have on our menu would be devastating.

Want to help the bees? Try these tips:

• Take a guided tour of the Häagen-Dazs Honey Bee Haven for ideas on bee-friendly flowers (hhbhgarden.ucdavis.edu)

• Have a source of water in your yard, like a fountain or pond

• Limit the use of synthetic pesticides

• Maintain your own backyard beehive