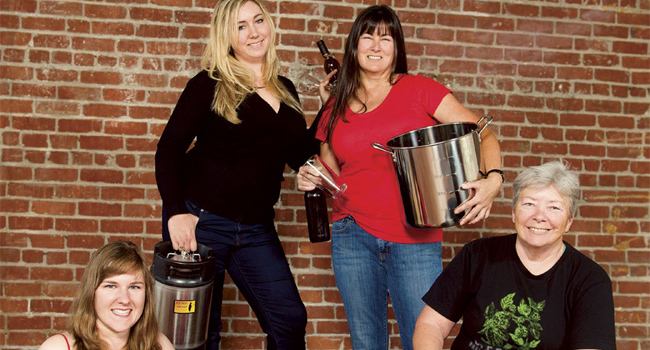 The brewing industry today is predominately male. But throughout most of history, it was women, not men, who served as the primary brewmasters. “Female brewers have a special spot in the hearts of people who know about beer,” says Glynn Phillips, owner of Rubicon Brewing Company in Sacramento. We talked with four women who are repeating history by embracing the homebrew movement—and are having a lot of fun along the way.

KELSEY WHITTAKER
HOMETOWN: Vacaville
YEARS BREWING: 1½
LOVES TO DRINK: IPAs
CLAIM TO FAME: Won first place for her Irish Red Ale at the 2012 California State Fair
WHAT PEOPLE THINK OF HER HOBBY: “When I tell them I brew beer, I’m instantly everybody’s best friend. It’s a good icebreaker for when I’m meeting new people.”
ADVICE FOR ASPIRING BREWERS: “Join a club; meet some people. And don’t be intimidated. Everyone is accepting and willing to give you a hand and let you borrow equipment.”

LINDSEY SHAW
HOMETOWN: Waterford
YEARS BREWING: 7
LOVES TO DRINK: Ambers and Belgian tripels
SIGNATURE BREW: Mead
BEST PART ABOUT BREWING: “I love how everyone tries very hard to help you be the best brewer you can possibly be. The friendship and support that I have received have been outstanding in helping me grow my skills.”
ADVICE FOR ASPIRING BREWERS: “Just have fun with it. The best part is when you’ve got downtime while you’re brewing, you just grab a beer, grab a cigar, put your feet up and watch it work.”

SUSAN KELLY
HOMETOWN: Rancho Cordova
YEARS BREWING: 4
BREWING FEAT: “I made a Belgian wit [wheat beer] with kiwi that was good. I like to experiment with recipes a lot.”
BEST PART ABOUT BREWING: “Besides meeting some really cool people, I’m getting the opportunity to taste some very rare, unique and aged beers. It’s good to have friends that like to share.”
ADVICE FOR ASPIRING BREWERS: “I was afraid to try brewing. But if you can find a mentor, it’s really helpful. A lot of people are willing to share their knowledge.”

CHERYL SKARE
HOMETOWN: Sacramento
YEARS BREWING: 1 ½
HOW SHE BECAME A BREWER: “I’m a little bit of a beer snob; I don’t just drink any old beer. It just seemed logical to me that I should start brewing my own beer.”
LOVES TO DRINK: Pale ales and IPAs
BREWING FEAT: “I made fig ale for the first time last winter. I’ll be tweaking that recipe. But I really enjoyed it and I think everyone who had it, including some of my brew club members, thought it was a pretty good beer.”
BEST PART ABOUT BREWING: “I like meeting people who like to do what I do. It transcends race or your personal living standards. It comes down to other people coming together to drink good beer that they like to brew.”