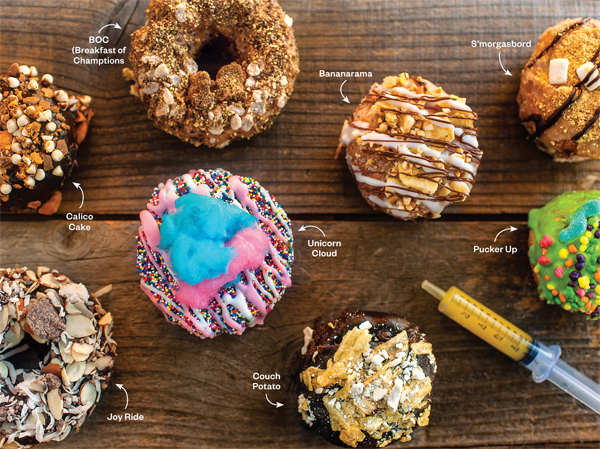 When a doughnut comes with its own Bavarian cream-filled syringe, consider yourself warned: This stuff could be habit forming.

The couple behind Roseville’s BAD Bakers, Vincent and Katelyn Tiuseco, have dreamed up over-the-top confections that make their plain glazed counterparts look decidedly ho-hum. “At first, people are a little overwhelmed by the different toppings,” says Katelyn, “but once they try them they go crazy over them.”

Customer favorite (and winner of the 2017 Sacramento Donut Festival) is the Couch Potato, a croissant doughnut dipped in chocolate ganache and sprinkled with white chocolate chips and crumbled potato chips. The inspiration behind it was a chocolate-and-potato-chip cookie recipe that Katelyn’s mom used to bake for her.

In fact, many of the flavor combinations at BAD Bakers have their origins in the couple’s collective food memory. “They are things that remind us of our childhood, our relationship and our families,” explains Katelyn. For example, the Movie Time doughnut, a raised doughnut topped with popcorn and Whopper crumbles and drizzled with chocolate, comes from Katelyn’s habit of tossing Whoppers into her popcorn at the movie theater.

Pint-size customers delight over the Unicorn Cloud, a cake doughnut dipped in sprinkles, drizzled with two kinds of icing and adorned with a fluffy mound of pink and blue cotton candy. If all that seems like a bit much (and it is), BAD Bakers also sells classics like chocolate, maple and plain glazed for customers who like their doughnuts a little more, shall we say, subdued.

As for the syringes, they can be ordered with a variety of fillings—from strawberry Bavarian cream to dulce de leche—to be injected into or slathered over the top of a doughnut. Either way, they take things to a whole new level of decadence.

The Tiusecos opened BAD Bakers (BAD is an acronym for bread and doughnuts) in July following the raging success of their Starbread Bakery in Natomas, home of the cigar-shaped Filipino sweet rolls that have earned them hundreds of fans on Yelp. (That Starbread outlet will soon be converted to a BAD Bakers.) The couple arrives around 4:30 every morning to start baking for the day, splitting their time between their two shops. What little downtime they get is spent with their baby daughter. “We are building this business for her,” says Katelyn.

The couple has dreams of expanding within the metro region and possibly beyond. And they aren’t done thinking up newfangled doughnut recipes. “We eventually want to have something like 31 flavors, like Baskin-Robbins,” says Katelyn. Better start hitting the treadmill now.