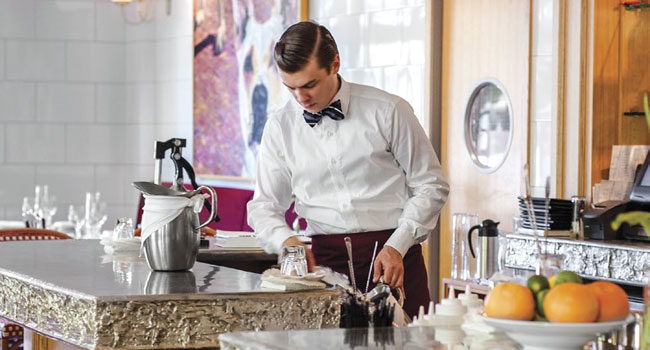 For the past six months, a number of splashy new Sacramento restaurants have been racing to open, stacking up like airplanes waiting to land at O’Hare. Which one would get to the gate first?

The answer came in May when Brasserie Capitale opened in the old Broiler locale on K Street, edging out Empress Tavern, Paragary’s Midtown Bistro, Iron Horse Tavern and others. Owned by the family behind midtown’s Aïoli Bodega Española and The Grand wine bar, it’s the first notable new restaurant ushered in during Sacramento’s exuberant DA (downtown arena) era.

It’s a bit unusual for Sacramento: a traditional French brasserie, complete with a pewter bar and a menu written almost entirely in French. (No craft beers? No pizza? Zut alors!) Aïoli owner Reda Bellarbi-Salah started exploring the idea of a brasserie several years ago with Christophe Cornet, formerly the private chef to the Maloof brothers. He entrusted the project to his son Aziz, who’d lived in Paris for a couple of months as a teen and has traveled often to France.

In France, the brasserie occupies the middle ground between formal restaurant and casual cafe or bistro. It’s elegant but not stuffy. “The French think of the brasserie as their ‘regular’ place,” Aziz explains.

Sherman Warren of San Francisco designed the gorgeous restaurant, lightening up the old Broiler space with rift-cut red oak paneling and a wall of windows that open up to a dining patio along K Street. There are banquettes covered in merlot velvet and brass light fixtures from Epi Luminaires outside Paris. On the floor are decorative cement tiles from Granada Tile (very of-the-moment). Velvet drapes on heavy brass rods can be pulled closed to create two private dining spaces. Local sculptor Alan Osborne created the cast-pewter bar with its bas-relief front depicting the four seasons in a vineyard. If you didn’t take French in high school, you may find the menu intimidating, at least at first glance. “Cuisine et Vins Francaise Traditionnelle” it reads at the top. And underneath, “Les huitres 14 chaque demi douzaine,” accompanied by a helpful picture of an oyster. Fortunately, French dish names are followed by descriptions in English. Oeufs Mimosa are deviled eggs with cornichon and crispy prosciutto. Les Moules a la Bourgeoise are mussels with white wine, cream and anisette.

The menu hits the high points of the French brasserie canon, everything from onion soup to steak frites. There are housemade pates and tartares, along with desserts such as tarte tatin and baba au rhum. Aziz flies in escargot and foie gras from France. For the coq au vin, he’s trying to source capon (rooster)—not readily available in the United States, but considered the secret to the dish’s success. “We’re not trying to reinvent the wheel,” he says. “We just want to do the good stuff right.”

Heading up the kitchen is Scott McNamara, the former head chef at Bistro Michel who’s also worked at Ella and 55 Degrees. (Cornet dropped out of the project back in September.) Five days a week, there’s a different “plat du jour”: for example, veal cheeks on Wednesday, bouillabaisse on Friday, cassoulet on Saturday. The lunch menu is a truncated version of dinner, with the addition of a daily sandwich: croque madame one day, pan bagnat another. Next door, a casual sister restaurant called Cafe a Cote serves coffee, housemade pastries (croissants, etc.) and grab-and-go sandwiches.

Aziz oversees the 78-bottle wine list, all of it French with the exception of Bonny Doon Vineyard’s Vin Gris de Cigare, a rose. He focused his list on affordable Beaujolais wines. “In France, nine-tenths of house wines are Beaujolais,” he explains. “It’s very French.”

Located at the northeast corner of 12th and K, Brasserie Capitale is one point on a compass that includes both Ella and Mayahuel. More restaurants within a couple of blocks are due to follow soon. (Empress will be a baguette’s throw away, and Ruth’s Chris reportedly plans to open in the old Pyramid Alehouse.) Aziz says that by opening Brasserie Capitale, his family is striking while the iron’s hot. “This will be Sacramento’s new dining district,” he predicts.