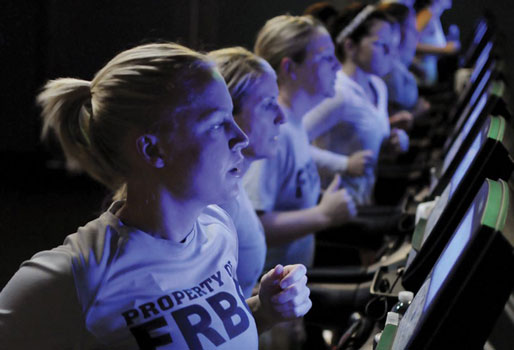 When it comes to finding a gym you’ll actually use, bigger isn’t always better. While the extended hours and vast class offerings at big-box gyms carry a certain appeal, smaller and more focused fitness studios have grown popular in Sacramento.

Devotees of the boutique fitness scene seek more personalized attention and higher quality amenities than they might find at a traditional gym. “Our clientele expect a high level of service, cleanliness and education,” says Adam Attia, who opened Fitness Rangers, a boot camp-based gym, in January 2012. “Sacramento has a thriving fitness scene,” says Amy Brown, who opened InstaPhysique Lagree Fitness Studio—the first studio in town outfitted with Megaformer machines—earlier this year after falling in love with the patented fitness method in Los Angeles. “People are active and open to getting out of the big corporate gym environment.”

Built into the higher prices that specialized studios charge are competitive wages for educated trainers. “Our instructors are trained to do one thing and be the best at it,” says TEAMride co-owner Teresa Santarosa. Attia adds that several trainers at Fitness Rangers have advanced degrees in sports sciences, a major differentiator from the online-certified coaches you might find at less expensive gyms. “We’re all homegrown,” Attia notes of the various boutique gyms that are thriving in Sacramento.

Here’s a sampling of some local fitness boutiques.

The Academy Training and Performance Center
1116 F St.; (916) 482-9477; theacademyfitness.com
Rates: $20 drop in, $165 monthly
What to expect: This 10,000-square-foot gym has 50 yards of turf in lieu of treadmills. Strength training classes are held on Mondays (upper body), Wednesdays (lower body) and Fridays (full body), while conditioning classes are scheduled for Tuesdays and Thursdays. Be prepared for high-fives and high spirits.

Fitness Rangers
1717 34th St.; (916) 739-1100; fitnessrangers.net
Rates: $25 drop in, $199 monthly
What to expect: Feel like a basic training recruit in the gym’s flagship boot camp class, where you’ll mix treadmill sprints with TRX and strength training. Ditch the treadmill in HIIT or turf classes, or try something totally different like boxing, barre or yoga.

InstaPhysique Lagree Fitness
2381 Fair Oaks Blvd.; (916) 692-3263; instaphysique.com
Rates: $28 drop in, $209 monthly
What to expect: Often described as “Pilates on steroids,” the patented Megaformer machine uses adjustable spring-loaded resistance and facilitates more than 200 exercises with bizarre names like “wheelbarrow” and “mega donkey kick.” You won’t be laughing at the silly names the next day, though.

P20 Hot Pilates and Fitness
2012 P St.; (916) 449-2720; hotpilatessacramento.com
Rates: $18 drop in, $159 monthly
What to expect: With UFC fighter Danny Castillo at the helm, this place gets you into fighting shape with classes such as Battle Ropes, Muscle Hustle, Pull-up Club and Kettlebells. If fighting shape isn’t your goal, check out Bikini Butt, yoga, barre, guided meditation and, of course, hot Pilates.