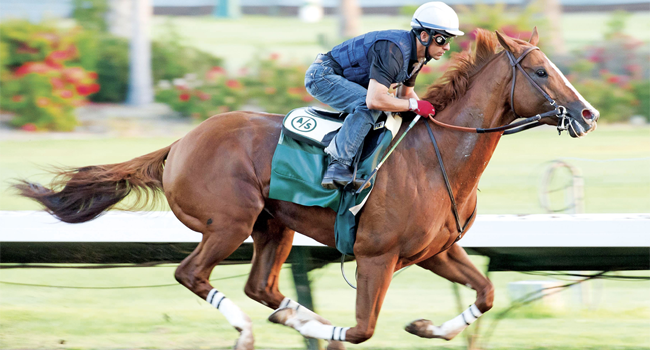 The love child of two nobodies named Lucky Pulpit and Love the Chase was born 170 miles down the road on a farm near Coalinga. But his legend was created right here at the corner of Fourth and B streets in Galt, on the patio of a 19th-century brick building called Brewsters Bar and Grill.

Brewsters is not famous as a place that makes legends. It’s known for good whiskey and cold beer and gourmet hamburgers. And Brewsters is a museum, a repository of Galt history. The walls are filled with black-and-white photos from the past, the Galt High School baseball team from the 1930s, St. Luke’s Episcopal Church, the Sego condensed and powdered milk factory next to the town’s water tower, before the factory burned down.

Near the kitchen, above the historical photos, is a contemporary image, ablaze with the colors purple and green. The photo shows a man on a horse. But there is so much more to it than that. The man is a jockey named Victor Espinoza. The horse is California Chrome. Brewsters is where the legend of Chrome began.

“It’s funny, but we didn’t even know we had any connection with him until after he won the Kentucky Derby,” says J.R. Majid, who owns Brewsters. “Of course, like everyone else, we love him.”

Still racing at age 5, California Chrome is the most enduring horse on the planet, renowned from Kentucky to Dubai and Hong Kong to London. Wherever people admire horses that can run fast and overcome great odds and make fools of cynics and doubters, they know about California Chrome. The glory of Chrome isn’t restricted to his ability to win races and earn a fortune in prize money. Those things are nice, and he has excelled at both. He’s won $12.5 million, more than any North American horse in history.

But there’s something else about Chrome: a spirit that lets him transcend equine boundaries and communicate on a human level. He has won and lost. He suffered injury and heartbreak. He fights back. He chooses his friends carefully and is a picky eater. He’s had foot troubles and needs special shoes. He always maintains his dignity. For those things, we love him.

The day he was born, he had no real future. His parents were common as dirt as Thoroughbreds go. Bloodlines are everything in horse racing, and his provenance was so watered down as to be nearly irrelevant. Seattle Slew and Secretariat lurked in his distant lineage, but they were from pastures far removed. He almost killed his mother at birth. He dragged a hoof as he entered the world and tore her uterus. She needed medical attention and IV therapy that day, Feb. 18, 2011. She tangled herself in the plastic lines as she watched her son stand up and start to run around. He weighed 136 pounds, big for a baby.

His poor mother, Love the Chase, was humble in the extreme, valued at $8,000. His father’s stud fee was $2,500, with $500 knocked off. His owners “received a discount on the advertised fee,” says Debbie Correia of Harris Farms in Coalinga, where California Chrome was born. In a game where champion broodmares fetch $1 million and champion stallions stand stud for $100,000 and beyond, what chance did Lucky Pulpit’s son have?

Then there were his owners, two couples relatively green in the racing game. Perry and Denise Martin own a company that tests electronics products for fatigue and heat resistance at McClellan Park. Perry, a physicist, came up with the breeding strategy. He naively mapped out a race schedule called “The Road to the Derby.” Steve and Carolyn Coburn of Topaz Lake, Nev., were looking for a tax break, rarely a good reason to invest in something that requires equipment, stables, grooms, trainers, veterinarians and eats seven days a week. They named their stable Dumb Ass Partners. As tax breaks go, the horse was a failure.

Before he stepped onto the racetrack, the best thing California Chrome had going for him was his name. It’s the perfect name: evocative of a special place, flashy without boast, polished. There are countless strategies to naming racehorses. Rules allow maneuverability. If the name is shorter than 18 spaces, isn’t vulgar, isn’t an advertisement, isn’t a numeral, doesn’t belong to an active horse or former champ and doesn’t contain horsey terms like colt or stud, it should be OK.

But names can be troublesome, especially for newcomers who called themselves Dumb Ass Partners. The Martins and Coburns couldn’t decide on a name for their chestnut colt with the white blaze and white socks. At Harris Farms, he was called Junior. By 2013, he needed a proper racing name. Everyone had a better idea. Denise liked Big Chapter. Perry liked Seabisquick. Carolyn liked Lucky At Love. Steve liked California Chrome. This much they agreed on: They would meet at Brewsters in Galt, because it was about halfway between the Martin home in Yuba City and the Coburn place in Topaz Lake. Over lunch on Brewsters’ patio, they would settle the name debate.

“One of the guys, Steve, wore a big cowboy hat,” J.R. Majid says. “They wrote the names on pieces of paper, threw the papers into Steve’s hat, and asked our waitress to pick out the winner. The first name she picked was California Chrome.”

In the months between the name lottery and May 2014, when California Chrome won the Kentucky Derby and Preakness Stakes, Majid and his employee, Alison Siminich, had no idea what they had done. The role played by Siminich didn’t come to light until a producer from NBC contacted Brewsters to confirm the tale. Confirmation proved problematic. Majid vaguely remembered the hat but couldn’t remember who worked the patio. “After all, I have 15 employees,” he says. Siminich’s memory was better. And her service to racing is eternal. Under racing rules, California Chrome’s name will be retired this year when he stops running, a worthy honor for a champion who was almost called Seabisquick. Christened with his new name, California Chrome was not instantly beatified. His first racing year was good, not great. He changed jockeys twice. He needed customized hard rubber shoes because his heels were worn down. He was prescribed furosemide, a diuretic to help horses that bleed from their nostrils. At Perry Martin’s suggestion, he began to wear nasal strips. He won three big races and twice finished sixth. And with Espinoza as his new jockey, he won his final race of 2013 by six and a quarter lengths.

As 2014 began, California Chrome placed himself firmly on the road to the Kentucky Derby. Three runaway victories at Santa Anita did it. His biggest problem was his lineage. California nobodies aren’t supposed to win the Kentucky Derby. He won by one and three-quarter lengths. Two weeks later, he won the Preakness Stakes, the first California horse to take the first two legs of the Triple Crown. His luck failed at the Belmont. At the start, a horse named Matterhorn stepped on California Chrome’s right front heel, extracted a piece of tissue and damaged a tendon. California Chrome finished fourth, his leg bloody as he pounded down the homestretch.

The Chrome story unraveled under the strain of success and the miss at the Belmont. The Martins and Coburns bickered. Perry Martin sent California Chrome to Dubai and England for races in 2015. In England, new hoof problems were discovered. Chrome went to Kentucky to rest, then home to Los Alamitos, down the street from Disneyland, where he lives in a customized double-wide stall and munches his favorite food, Mrs. Pastures Cookies for Horses, from Walnut Creek. The layoff forced Chrome to miss his chance against American Pharoah, a blue-blooded Kentucky horse who won the Triple Crown and Breeders’ Cup in 2015 with Espinoza aboard. Pharoah retired to stud. His victories made people forget about California Chrome.

Perry and Denise Martin continue in the game with 60 percent of Chrome, plus four broodmares, four colts and Chrome’s sister, a 3-year-old named Hope’s Love. “My wife and I still enjoy it,” Perry says. “With Chrome, we always knew he was special. He was taking big strides as soon as he stood up in the foaling barn. I said, ‘Look at that. He was born to run.’”

California Chrome went back to the United Arab Emirates for the $10 million Dubai World Cup in March. His homestretch speed demolished the field. He will end his career in November, with the Breeders’ Cup in Santa Anita, and stand stud at Taylor Made Farms. The extra year of racing has raised his sire value.

“He’s 5 years old now, but that’s the best age for a racehorse,” says Art Sherman, Chrome’s trainer. “We have to work him a little harder, because he tends to put on weight. His personality hasn’t changed, but he’ll let you know he’s a stud. There’s a lot of stallion in him.”

Sherman has trained the horse from the start. He loves California Chrome and believes he’s a champion for the ages. The humble beginning makes the horse remarkable. Says Sherman, “If it wasn’t for him, all these small breeders wouldn’t be around, figuring they have a chance. He showed people what’s possible.”