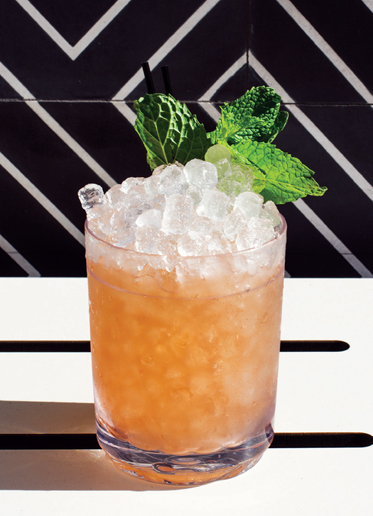 Nobody is ever going to mistake Sacramento for South Beach. But our snoozy little city got a taste of Miami heat with the opening in October of Revival, a rooftop bar and lounge inside the new Kimpton Sawyer Hotel.

The Sawyer, located next to Golden 1 Center, is a 250-room boutique hotel topped with a boxlike, five-story structure that contains 45 high-end residential lofts, with price tags reportedly as high as $4 million. It’s the high-profile centerpiece of Downtown Commons, aka DOCO, a retail-and-entertainment project (still under construction) designed to draw people downtown.

On the hotel’s third floor is Revival, a sleek, modern lounge with bar and cocktail seating. A wall of windows opens onto an outdoor patio overlooking the new arena and downtown. Outside, there are fire pits, lounge chairs, cabanas and a DJ stand, but the big draw is the shimmering swimming pool. You have to be a hotel guest or loft resident to swim, but you can be pool-adjacent for the price of a cocktail.

For a chef with a fine-dining background, Prager had an unusual challenge: come up with a menu of elevated bar snacks. (Two fullservice restaurants—a steakhouse called Echo & Rig and an upscale Dave & Buster’s called Punch Bowl Social—are set to open soon on the hotel’s ground floor.) Prager took a playful approach to his task, with dishes like lobster corn dogs and candied bacon wrapped in a cloud of cotton candy decorated with tiny edible flowers. Even dessert was devised with tongue firmly in cheek: House-made “otter pops” come in flavors such as Concord grape/pomegranate, sour apple and horchata.

The drinks menu is much lengthier than the food menu, with several pages of craft cocktails, wines, beers and spirits. In addition to traditional bottle service starting at $275, Revival offers cocktail “enhancement kits” that allow a table of people to mix their own Old-Fashioneds or French 75s. The kit includes a bottle of liquor, mixers, garnishes, miniature shakers and bar tweezers, along with a recipe card. Smith came up with the idea. “It’s an interactive experience,” he says, “almost like a family-style meal, but for drinks.”

The lounge has a dress code: No flip-flops, baseball caps, sports apparel, tank tops, athletic sneakers or hiking books allowed. (Jeans, however, are OK.) Reservations for “VIP” and cabana seating come with a food-and-drink minimum, starting at $300 for up to six people.

Revival is open Wednesday through Saturday evenings, plus on nights when there’s a game or special event at the arena. Already spotted hanging out there: several Kings players and rapper Lil Jon. Is it South Beach? No. Is it cool for Sacramento? Definitely. “There’s not even a place like this in San Francisco,” says Smith.