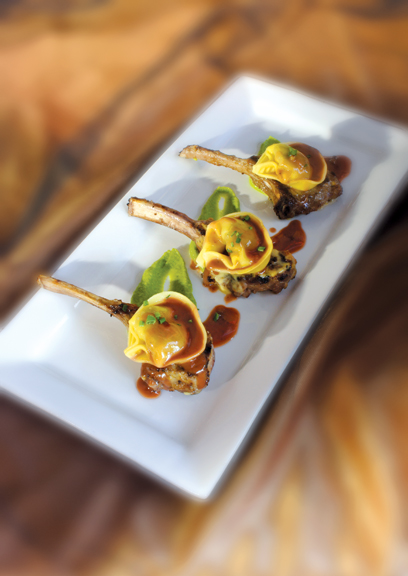 What Makes It Special: The slick, modern, surprisingly small interior (described by a dining companion as Bill Blass meets the Starship Enterprise)

What To Order: Roasted garlic and shrimp ravioli; fabulous cream of broccoli soup (when it’s available)

When To Go: If you simply want to dine, hit the restaurant for lunch. To check out the late-night scene, go Friday or Saturday at midnight.

In recent years, the heavily trafficked intersection of 16th and J streets in Sacramento has become a restaurant magnet. Within less than a block, you can eat skillet-roasted mussels and chicken risotto at Lucca, slurp lo mein pork noodles at P.F. Chang’s or dig into one of Mikuni’s famous Marilyn Monrolls.

It would be easy to conclude that the neighborhood has reached its restaurant saturation point, but Fred and Matt Haines, brothers and partners who own East Sacramento’s 33rd Street Bistro, Land Park’s Riverside Clubhouse and Bistro 33 in Davis, thought differently. The duo decided this small patch of city lacked an upscale, late-night bar, so in April they unveiled the snug, sophisticated Bistro 33 Midtown.

It is not a simple re-creation of the Haines brothers’ neighborhoody, convivial bistro in East Sacramento. While the two restaurants share a similar name and a handful of dishes, the Haineses did not import 33rd Street’s folksiness and casual Northwestern ambiance to the new space. Stark, modern and striking, Bistro 33 Midtown is all gutsy urban style, from the white plastic tables and banquettes upholstered in metallic cloth to the imposing steel beams slanted across the large windows and the spiky black light fixtures hanging above the minimalist black-and-chrome bar.

The bar so dominates the tiny space that it appears the brothers envisioned this primarily as a swanky watering hole, installing a smattering of tables (12, to be precise) in order to justify the bar’s existence. It attracts a young, fashionable&emdash;and fashionably late&emdash;crowd, and the Haineses encourage this, serving food until midnight Sunday through Wednesday, until 3 a.m. Thursday through Saturday.

The menu is divided into four categories: small plates (by far the biggest section), salads, panini (where you’ll see some old favorites from 33rd Street Bistro) and large plates. The small-plate selection is the most fun and varied, ranging from a very tasty pure of artichoke and white beans topped with olive tapenade (offered, disappointingly, with big, crumbly crackers instead of bread) to stunning housemade roasted garlic and shrimp ravioli, bathed in an invigorating walnut-oregano pesto.

A house specialty is the Monte Cristo sandwich, an item you rarely encounter on menus these days. We brought our 9-year-old son for dinner just to let him try the sandwich, fondly recalling the powdered-sugar-encrusted, jelly-slathered, deep-fried Monte Cristos of our youth. However, the Bistro version was quite unlike the Monte Cristos we remember. It looked pretty much like ham and Swiss on grilled bread&emdash;but the bread tasted strangely heavy, drenched with a fatty, sweet oiliness we couldn’t define. The waitress told us the kitchen soaks the bread in crÃ¨me brÃ»le batter before grilling. Our arteries constricting with concern, we watched our son plow his way enthusiastically through the first of three pieces. I’m full, he said suddenly, pushing the rest away. I don’t want to eat that again.

More successful samplings included a delightful trio of mini tostadas piled high with shredded pork, avocados, black beans and queso fresco (don’t order this on a first date&emdash;it’s unbelievably messy to consume), and a bowl of steamed clams in a rustic, brightly appealing tomato sauce dotted with chewy chorizo chunks. We loved the light, refreshing Bistro Gardens salad: very fresh mixed greens piled high with chopped toasted hazelnuts, tiny currants and crumbled Gorgonzola cheese. And don’t miss chef Fred Haines’ inspired pan-seared pork tenderloin, served with a toe-curlingly sweet ancho chili-onion marmalade that, somehow, is just right when tamed by the earthy bitterness of the accompanying coffee-steeped pearl couscous. This is an entre that requires diners to combine all three of the plate’s components in each bite: Separately, they make little sense, but together they shine.

Not so impressive were smoked bay scallops with fettuccine, a large mass of cream-drenched noodles with a small handful of intensely flavored, dryish scallops and a scattering of toasted hazelnut pieces. Overly rich and bland, the dish cried out for some acidic contrast to temper the overwhelming creaminess. We also had a difficult time tackling the kitchen’s grilled baseball top sirloin, a large, round, tough hunk of meat that required some energetic hacking with a knife. Although the menu promised a lobster-butter garnish, the sirloin came topped with a spunky green pesto sauce that was a nice complement to the meat.

We would not recommend the three desserts we sampled. The chocolate espresso pot de crÃ¨me had a stubborn, fudgelike density that rendered it difficult to eat; the hot bag o’doughnuts, though served with a lovely strawberry-rhubarb compote, were heavy and doughy; and the little chocolate sundae featured vanilla ice cream showered with overly toasted, bitter walnuts and a waxy, sparse dribbling of chocolate sauce.
While the menu clearly needs a bit of fine-tuning, Bistro 33’s lively selection of American-style fare adds a refreshing new option for midtown diners. In an ever-growing Sacramento region, distinctive, interesting restaurants are always welcome&emdash;and we applaud the Haines brothers’ bold leap into this busy gastronomic fray.