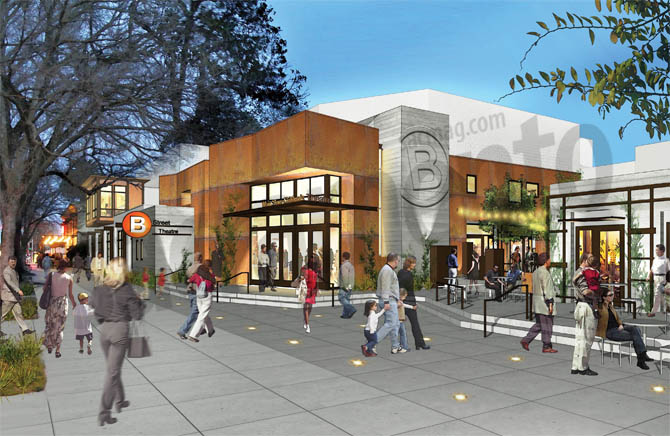 To grow its program and live up to its national reputation, B Street Theatre is moving from the outskirts of Midtown to big new digs in the happening Sutter District.

“It’s the biggest thing to happen in midtown since Sutter’s Fort,” says local architect Ron Vrilakas. He’s referring to the new B Street Theatre complex to be built at 27th Street and Capitol Avenue starting next year—a project his firm, Vrilakas Architects, is designing and developing.

Since brothers Buck and Timothy Busfield founded the not-for-profit B Street in 1986 to introduce children to live theater, it’s been housed in a downat- the-heels building known to many as “the shack by the tracks” because of its location near the train tracks at B and 27th streets. Despite its inauspicious locale, it has managed to become one of the country’s most prolific performance venues. Its theater space, however, has not been able to grow with the theater program. “Where we stack up nationally in terms of productions and equity, we are in the highest echelon in the country,” says producing artistic director Buck Busfield. “But when you look at the current theater space, it just doesn’t look like that. Our patrons tend to like it here. But what they don’t understand is that we’re unable to bring them better theater by being here.”

As far back as 1998, Busfield and Bill Blake, B Street’s managing director, discussed the need for a new location. Not only were they limited in the types of plays they could produce because of their stage size, but they also were turning away thousands of kids a year because of space constraints.

Like a fairy godmother from one of B Street’s Family Series productions, Sutter Medical Center in 2004 made a wish-come-true donation: a $7.5 million land gift across the street from its new hospital in midtown. “Sutter Medical Center has provided us with a fabulous lead gift of land, services and dollars. But what doesn’t show up in their gift is the profound advocacy they’ve done for us. It’s a huge statement of faith in a notfor- profit performing arts organization you rarely see,” says Busfield.

A couple of architects and one major recession later, plans for the new B Street Theatre are still very much on track. The addition of Vrilakas Architects was pivotal. (The group’s midtown credits include Zocalo restaurant at 18th and Capitol, the Firestone Building at 16th and L, and the East End Lofts at 16th and J.) “We are the first local architect to be involved,” says Vrilakas, “and we’re a very midtown-oriented, mixeduse firm that’s located virtually on the same street. The project has now found its sweet spot.”

“Ron understands Sacramento—midtown in particular,” says Busfield. “He really has a great feel for what this city is and what it’s going to become, and I think he’s going to be one of the major players in making it be that. He also knows who we are. He understands our DNA and that, in trying to design a new space for us, you have to thread a needle.”

So what will B Street 2.0 look like? Outside, there will be a large courtyard close to the street, making the complex instantly feel like part of the cityscape. On field trips, schoolchildren will be able to eat lunch in the courtyard while watching the city zip by. The complex also will include a large cafe, adding to the mixed-use appeal—and minimizing the need for theatergoers to rush through dinner at a nearby restaurant.

Inside, there will be two modestly sized theaters. Both will be stateof- the-art, but Busfield, Blake and Vrilakas have put a lot of energy into translating B Street’s signature casual, intimate feel for the new spaces. The Shalleck Collaborative, a San Franciscobased theater design agency that also worked on the Crocker Art Museum’s theater and Three Stages at Folsom Lake College, is helping with the interiors. After ground is broken in 2014, Vrilakas estimates he’ll bring in another 15 outside experts to help with everything from acoustics and lighting to the heating and air-conditioning systems.

The larger Sutter Children’s Theatre will hold 365 people, able to accommodate an additional 30,000 kids a year. “For most kids, this will be their first exposure to live theater, so we want it to feel like it’s something special,” says Vrilakas. “We want it to be an uplifting and memorable experience, which starts from the moment they get dropped off. Sacramento is a pretty suburban place, so this will also be many of the kids’ first urban experiences. If we do it well, we can really change the way kids think about cities and the place they live.”

The new Mainstage theater will be about 50 percent larger than the existing theater and able to hold 250 people. The 40,000-square-foot complex also will offer plenty of places to go pre- and postshow— something seriously lacking at the current isolated facilities. Musical acts will be booked when the stages aren’t in use for theater productions. “It’s purposely going to feel like an 18- hour-a-day live corner,” says Vrilakas.

Upstairs will be theater offices, meeting rooms and rehearsal spaces. Some of the smaller rooms will have stage lighting so they can be used for public meetings or small production experiments. These spaces also will be conducive to growing B Street’s popular programs, such as the children’s summer camp—consistently at full capacity— and adult conservatory classes. Ultimately, these design plans are meant to create a venue that better fits B Street Theatre, both aesthetically and organizationally. “We are a grown-up theater company with a very big staff and a big budget,” says Busfield. “We do more productions than most theaters in the country. So we want to create something that represents the size and scope of the organization. There’s a whole laundry list of things that are going to make us more efficient: The new stage will have wing space and fly space that will allow us to do whatever we like. The customer service will be much better.”

It also will be a huge economic engine for the area. Busfield estimates the venue will bring in $40 million to the city during the first five years of operation. “I’ve been in midtown for the past 22 years, and I know it like the back of my hand,” says Vrilakas. “There’s not been an impact in the neighborhood like this in the last half-century. Once it’s done, it will be an instant icon.”

Of course, we’ll likely have to wait until 2015 to actually reap the rewards of the new B Street Theatre. “It sounds like a long time,” Vrilakas admits. “But on our side of the equation, there’s so much to be done to get into construction and during construction.” Costing $24 million in total, the project is moving along rather quickly compared to similar developments. In fact, the national average for constructing a notfor- profit performance center is 13 years.

You have to give the donors a lot of credit for keeping the momentum going. While 50 donors have given gifts ranging from $10,000 to $100,000 each, more than 10,000 ticket subscribers have delivered, too. Busfield and Blake called and met with patrons individually to raise money and answer questions. They are confident they will exceed their fundraising goals.

As elevated as the new facilities will be, B Street Theatre’s goal remains the same: to appeal to the entire community. “We are a populist organization,” Busfield says. “We want everyone to come: men, deer hunters, people who go to the San Francisco art scene— everyone.” The theater also intends to stay loyal to its roots: It hopes to use the “shack by the tracks” for extra rehearsal space.