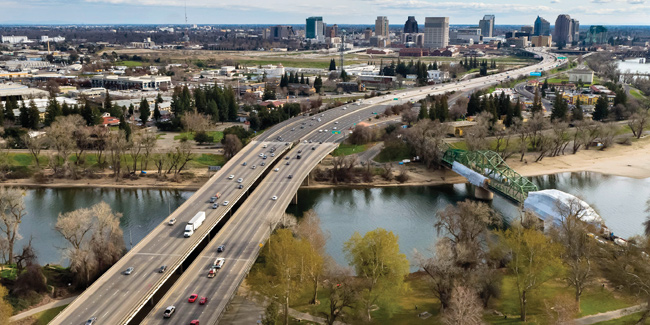 Farmers use them to monitor their fields. Amazon wants to deliver packages with them. And now news organizations like The Sacramento Bee are relying on them to report some of their biggest stories. Drones—also known as unmanned aerial vehicles—are revolutionizing the way work is done in any number of industries, including journalism.

“We’re always looking for new ways to tell stories, and the visual space is one of those ways,” says Jason Shoultz of the McClatchy Video Lab Team. Shoultz works on video projects for McClatchy newspapers across the country, including The Sacramento Bee. “Drone journalism provides new ways to see things, to experience things and to show our audience places they wouldn’t normally be able to see.”

Before drones, aerial photography was conducted mostly from airplanes and helicopters. But drones like the DJI Inspire 2 used at The Bee have lately become an important tool for news organizations. Because these flying robots are small and nimble, they can do things that larger aircraft cannot, such as fly through narrow spaces, even through trees.

Drones are particularly useful for gaining perspective on large-scale events like fires, floods and war zones. After the Tubbs fire torched thousands of acres across wine country last October, Sacramento Bee photographer Hector Amezcua used a drone to capture remarkable footage of the devastation in Santa Rosa’s Coffey Park neighborhood—footage that would have been impossible to obtain without a drone.

“Hector was able to get the drone in the air to see just how broad the damage was from that fire,” says Shoultz. “The video was heartbreaking, first of all, and also really captured the scope of the damage.”

The Bee’s drone pilots are required to obtain certification from the Federal Aviation Administration and complete a company training program before flying the aircraft. The aim is for pilots to master both the technical and storytelling aspects of drone journalism. “It is definitely something new for folks to become a pilot and learn how to fly a remote aircraft and at the same time operate a camera on that aircraft and capture compelling footage,” explains Shoultz. “It takes a lot of flight time to hone your skills.”

Safety is a primary concern on every shoot. “Before we launch a drone, we have to check a lot of things: airspace, legality, wind speed, atmospheric conditions, people on the ground,” says Shoultz. A visual observer accompanies the pilot “to make sure there are no issues so the pilot can focus on flying and operating the camera.”

Shoultz says that “all the same rules of photojournalism” apply to drone pilots as they would to any news photographer. With regard to privacy rules, for example, “we wouldn’t use the drone to go places we’ve been told we can’t go.”

McClatchy plans to train more drone pilots in its newsrooms across the country with the expectation that drones can bring new and interesting perspectives to certain news stories. As Shoultz puts it, “I hope we can help folks realize that we have a presence in the digital space and we have a lot of great ways to tell stories beyond the paper that lands on your doorstep.”