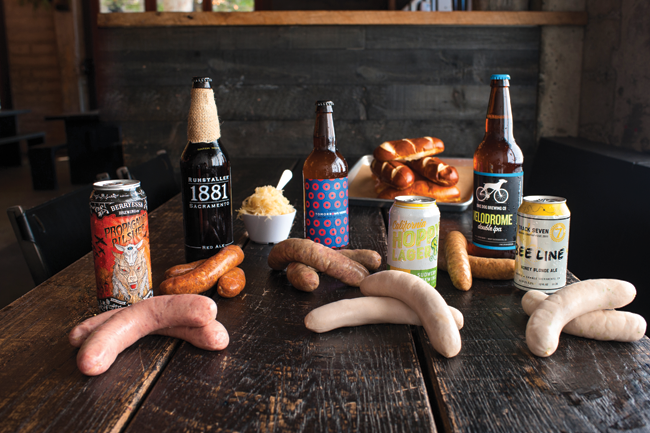 The defining image of Oktoberfest, the annual Bavarian folk festival underway Sept. 22–Oct. 7 in Germany, is overflowing steins of beer and platters of steaming wurst, both of which we have in abundance right here in Sacramento. Our music is probably better anyway.

Our beer scene is a suds tsunami. For instance, the California Craft Brewers Association lists 84 breweries in the six-county Greater Sacramento Area (Sacramento, Yolo, Amador, El Dorado, Placer and Nevada counties), starring hundreds of styles and seasonal twists. And there’s this: So far this year, Sacramento has hosted Capitol Beer Fest, Sacramento Beer Week and the California Craft Beer Summit, the biggie that culminated with thousands of folks lined up at 160 brewery kiosks in front of the state Capitol last month.

More festivities are coming; check with your favorite breweries or go to beersinsac.com and eventbrite.com. One good-times detour is aboard the Beer Train with two more live-band-accompanied outings this year, Oct. 13 and Nov. 10 (sacramentorivertrain.com).

If you prefer a more personal Oktoberfest party, round up a variety of beers and sausages and invite friends over for a pairing-tasting-judging. To that end, we matched six very different local craft brews with six handmade sausages, from mild to wild.

To help arrive at our pairing, we consulted Mike Selfridge, the beer department manager at Corti Brothers market; Dan Scott, founder of Sacramento Beer Week; and a batch of breweries.

As for the wurst, sausagemeister Dirk Muller of Morant’s Old Fashioned Sausage Kitchen had some definite opinions. He’s handcrafted more than 50 kinds of sausages for the past 28 years, using old-school methods such as natural casings and proprietary spice blends.

Muller holds a “meisterbrief” certificate from a trade school in Frankfurt, displayed on a wall of his shop. It joins more than 50 awards he’s won in competitions sponsored by the California Association of Meat Processors.

Sure, you’ll find bratwurst and knackwurst in his cold case, but also sausages in the styles of Hungary, Italy, Sweden, Poland, Mexico, France, Spain, Switzerland, South Africa, England and Ireland. They’re ground from cuts of pork shoulder and beef top round.

To drop by Morant’s on a Saturday is like attending a kaffeeklatsch in Europe. “We’re a meeting place for Germans, Czechs, Swiss, Austrians, Hungarians, Romanians and Russians,” Muller says. “They’re looking for a taste of the old country.”

Muller suggests braising his wurst in beer with sliced onions, but there’s nothing like the smoky flavor and charry crispness from grilling over hot coals. Oven roasting works, too.

Meanwhile, let’s set the table. So, who brought the sauerkraut and the whole-grain mustard? What about the buns from Grateful Bread bakery?

1. Bockwurst (precooked): A fine grind of pork, salt and white pepper gets a background boost from a touch of onion. Its sweet simplicity teams well with Sudwerk California Hoppy Lager (Davis), more subtle and refreshing than hoppy.

4. Chicago-style Polish (raw): “A customer gave me his grandmother’s recipe for this one,” Muller says. The 80/20 pork-beef blend is redolent with black pepper, marjoram, allspice and garlic—lots of garlic, and more garlic on top of that. Urban Roots (Sacramento) comes to the rescue with spicy Tomorrow’s Verse saison, delivering waves of soothing citrus and tropical fruit.

6. South African boerewors: A heavy-duty brew is needed to give pushback to this dry-by-recipe, coarse-ground 80/20 pork-beef stick of dynamite, eager to offer  tangs of clove, coriander, nutmeg, garlic and black pepper, with a surprise note of vinegar. Super-complex Bike Dog (West Sacramento) Velodrome Double IPA meets the challenge with depth of its own, resulting in a deep conspiracy between food and drink.