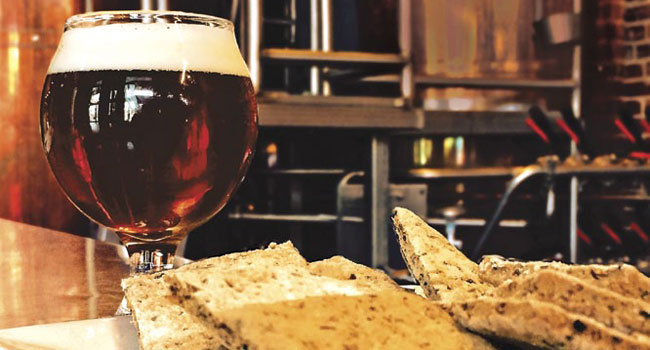 Sacramento’s boom in microbreweries has meant the boom of something else: spent beer grain. Mostly made up of barley, but also containing wheat, rye, rice, and corn, this beer byproduct is being turned into everything from dog biscuits and crackers to compost and animal feed. The grain is processed before fermentation, so it’s not alcoholic. But because it’s wet, it spoils very quickly, especially during Sacramento’s scorching summers. And there’s now a lot of it: New Helvetia Brewing Company uses about 600 pounds of dry grain per batch of beer, which translates into about 1,000 pounds of spent beer grain. Track 7 Brewing Co. produces about 40,000 pounds of grain per week. As a result, breweries have to find creative uses for the grain. To wit:

At Oak Park Brewing Company, you can get free spent beer grain for composting, to feed your backyard chickens or to make your own dog treats. A lot of the grain goes to a farmer who uses it for animal feed, but Oak Park co-founder Bonnie Peterson says they have also found many creative ways to use it in the restaurant’s kitchen, including in housemade crackers for the meat and cheese boards, barley risotto, vegan burgers, English muffins, even dessert. Dogs hanging out on the patio can get a treat made of spent grain, natural peanut butter, eggs and cinnamon.

Each week, Soil Barn Farms in Rancho Cordova picks up one 55-gallon drum of spent grain from American River Brewing Company, which they use to feed chickens and hogs and for composting. But most of the drums, 10 or so per week, go to Larry Benninger, a cattle rancher who owns Wheatland Natural Beef. Benninger has a herd of about 225 Red Angus and Black Angus cattle and estimates he picks up 50,000 pounds of spent grain per week from American River Brewing, Knee Deep Brewing and Lockdown Brewing.

If you’ve bought pork, lamb, beef or goat meat from Bledsoe Meats at the Sunday farmers market under the freeway in Sacramento, there’s a good chance it came from animals that were fed spent beer grain from Track 7 Brewing Co. Either John Bledsoe of Bledsoe Meats or a local cattle rancher picks up Track 7’s spent grain each day. At a Farm-to-Fork dinner last September at Hood Hops Ranch along the Sacramento River, beer from Track 7 was paired with a meal featuring a whole Bledsoe Farms pig that had been fed Track 7 grain. Check track7brewing.com for information about this year’s dinner on Sept. 12.