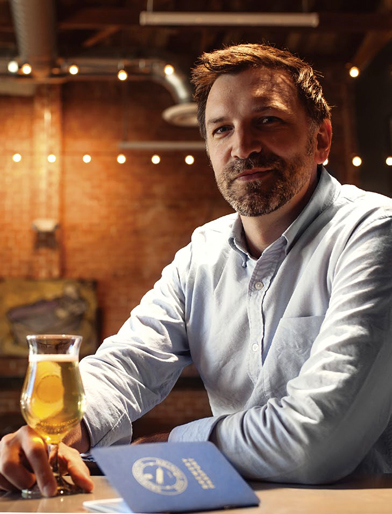 AARON O’CALLAGHAN IS a beer enthusiast and a map nerd.

“Here’s the thing. I like maps, I really do. So I put together a map for Beer Week and it got a great response,” explains O’Callaghan, who expanded the idea to create Sacramento Beer Frontier, an interactive beer crawl that involves every brewery roughly between Winters and Pollock Pines, Elk Grove and Nevada City.

Beer Frontier encourages people to visit the region’s 54 breweries by offering a stamp at each place for collecting in a passport so authentic looking, it could fool a lazy customs officer. Collect four stamps and you get a Beer Frontier bottle opener; 20 stamps, an imperial pint glass. For people who visit every brewery, O’Callaghan creates a custom map. “When you get all the stamps, send me a note and I’ll produce a map that shows how you went through it,” he says. Since the program started earlier this year, two people already have completed the passport.

According to Glynn Phillips, owner of Rubicon Brewery, people come in regularly for the stamp. “People are super excited,” he says. “They want that stamp.”

“Really, this is just the excuse to explore Sacramento,” says O’Callaghan. “One of the most interesting things about this experience: It’s the opposite of virtual. It’s a tangible thing that describes your travel, and you have physical documentation of visiting a place.”

The passport can be purchased for $14 at Taylor’s Market in Sacramento, Final Gravity in Roseville and Auburn, or online at sacbeerfrontier.com.