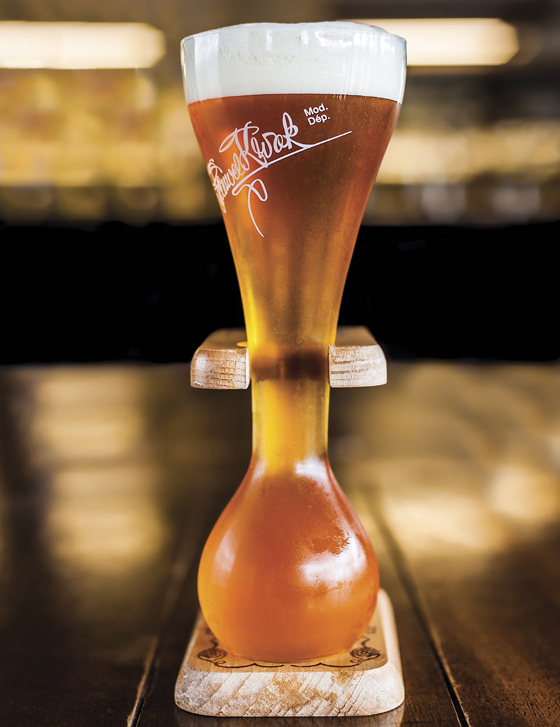 Sacramento’s emergence as a craft-beer mecca means lots of choices if you want to sample stouts, sours and pale ales—especially during Sacramento Beer Week (Feb. 27–March 9). Here are some of the best local spots, according to Daniel Barnes and Darcey Self-Barnes, the husband-wife team behind the popular His & Hers Beer Notes blog:

PANGAEA BIER CAFE This Curtis Park pub has “ambience off the charts,” according to Daniel. It has a neighborhood feel, big communal tables and a rotating selection of great beers, not to mention an excellent food menu. The staff is friendly and eager to educate newbies on beer choices. And the patrons? “You never see anybody angry or sad there,” Darcey says. 2743 Franklin Blvd.; pangaeabiercafe.com

CAPITOL BEER AND TAP ROOM The big draw here is the passion of owner Ken Hotchkiss, who regularly changes up the beer menu. “They only have about 16 taps,” says Daniel, “but it seems like they have all changed between (our) visits.” The atmosphere may not be as great as some places, he says, but that’s mitigated by a brilliantly curated tap list and bottle shop. 2222 Fair Oaks Blvd.; capitolbeer.com

LOWBRAU A f ixture in midtown’s MARRS complex, LowBrau has a vast (and loud) inside serving area and a magnifico patio where serious hop-heads can gather, compare notes on brews and watch midtown passersby. The big draw may be the regular appearances of brews that aren’t ordinarily available here, like Cascade, an Oregon beer that isn’t widely distributed. “It’s like seeing a rare wild animal in Sacramento,” Darcey says. 1050 20th St.

DER BIERGARTEN This outdoor spot in midtown feels like a German beer hall, to be sure, with classic German brews and tasty sausages. But its rotating menu includes plenty of non-German offerings, including Belgian brews. You can also play cornhole while you drink. 2332 K St.; beergardensacramento.com

FINAL GRAVITY TAPROOM This place has a sports-bar feel, with three TVs always tuned to games. There’s also a nice patio and a varied food menu. But, says Daniel, “the beer is obviously the star of the show.” Specialties are West Coast and Belgian brews. 9205 Sierra College Blvd., Roseville; finalgravitybeer.com

Where to get a green beer on St. Patrick’s Day (March 17)? You can’t go wrong at an Irish pub. Among the best:

BOXING DONKEY IRISH PUB The fun starts on St. Paddy’s Day at 6 a.m. with servings of corned beef and hash, and radio hosts Pat and Tom from KNCI-FM doing their morning show live on-site. Music will be performed all day on the patio and food specials will include colcannon, Irish nachos and Irish tacos. Also look for one special guest: a donkey. 300 Lincoln St., Roseville; theboxingdonkey.com

DE VERE’S IRISH PUB Pipe and drum bands will perform much of the day at both locations of this popular pub. On tap: Guinness, of course, along with Harp and Smithwick’s. (If you want to sound like you’re from the old sod, pronounce it “Smit-icks.”) Also available: de Vere’s “almost famous” Irish coffee and Wee Gin, a mix of Jameson Irish whiskey, Angostura bitters and ginger ale. 1521 L St., Sacramento; 217 E St., Davis; deverespub.com

Getting Home After a Night at the Pub

There are now lots of choices for locals who find themselves a tad tipsy and without a designated driver:

Standard taxis Every bar has numbers you can call.

Uber An app-based company that allows you to use your smartphone to arrange a pickup and automatically charges your credit card for the service. uber.com

Lyft The less-formal app-based alternative to Uber. Drivers are apt to give you a fist bump. lyft.com

Velocab If you’re really adventurous, try this pedicab service, available only if you’re traveling within the downtown/ midtown grid. Fees are up to the passengers. Pay $1 or $20 or anything in between. The company also offers weekend history tours and pub crawls. ridevelocab.com