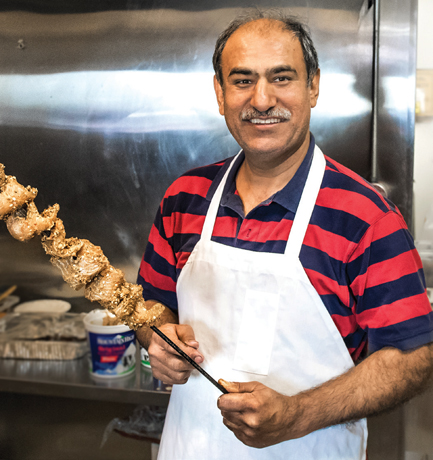 At Kabab Hut in Rocklin, a solitary window frames chef/owner Zulfiqar “Guddu” Haider in the kitchen, working in front of two small stoves and a tandoor. The tandoor is where Haider perfects his signature dish: tandoori fish that arrives still smoking at your table, crunchy and peppery yet somehow delicate, accompanied by freshly cooked onions, cabbage, green bell peppers and a generous splash of lemon juice.

Before opening Kabab Hut this past summer, Haider owned and operated two popular San Francisco restaurants: Lahore Karahi in the Tenderloin and Guddu de Karahi in the Outer Sunset. To say diners were passionate about Haider’s food would be an understatement. To say they were disappointed when he closed the restaurants would also be an understatement. A loyal customer recently made the round trip from her home in Palo Alto to get her fix of Haider’s home-style cooking.

So why did he open his new Pakistani restaurant in a Rocklin strip mall, next door to Subway and a couple of empty storefronts? Haider’s wife, Claudia Siefer, is partially responsible. She plans to move to Rocklin when she retires. Siefer has been singing with San Francisco Opera since 1975.

The food is worth the wait. Haider, who moved to the United States from Pakistan in 1994, makes his dishes from scratch, based on the same food his mother cooked when he was growing up. He keeps recipes in his head and refuses to divulge the exact ingredients. And he personally prepares every dish on his restaurant’s two-page menu, including a decadent rice pudding made with fruit and wedges of Jell-O.

Haider has help on the weekends but does triple duty most days as the restaurant’s sole server, dishwasher and chef. “If I’m not in the kitchen, the kitchen is dead,” he says. 6661 Stanford Ranch Road, Rocklin; (916) 315-3315