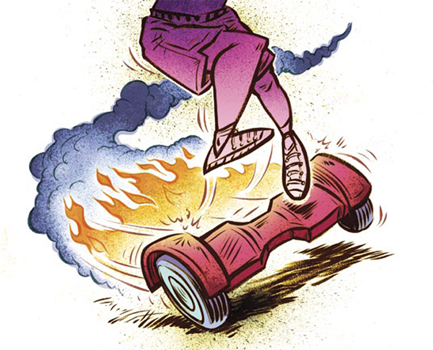 Call it a hoverboard. Call it the Segway with swag. Whatever you call it, you’re also probably going to have to call the emergency room.

Electronically motorized scooters were this past Christmas’ hot gift to give, but they could also be the most dangerous since Ralphie’s Red Ryder BB gun.

The two-wheeled, battery-powered contraption is a kind of self-balancing scooter without handlebars designed to have a standing rider control the forward and backward movement of the device by shifting weight with body and feet.

Because of its self-balancing mechanism, if the rider makes even a small misstep, the unit can speed up or lurch unexpectedly, resulting in some pretty nasty falls.

“There have been between 20 or 30 hoverboard-related injuries in just the last month and a half,” Wagner says. “The type of injuries we come across are similar to motorcycle or skateboard accidents and were prominent around Christmastime.”

Broken bones aside, there’s another issue with hoverboards: Spontaneous fires have erupted from the scooter’s motor and battery while it’s being charged up or ridden. There have been so many fires that the U.S. Consumer Product Safety Commission is looking into the problem.

In a statement, CPSC chairman Elliot Kaye said that investigations involving 12 manufacturers and at least 40 reports of scooter-spawned fires in the United States found that while a legitimate safety inspection company may certify the lithium battery packs and power supplies, there is no certification on hoverboards themselves or approval of their interaction with the power supplies.

For a gadget whose popularity could last as long as its battery, the state of California jumped on writing and passing laws regulating its usage. An amendment to Assembly Bill 604 prohibits anyone under the age of 16 from operating electronically motorized boards, and anyone using one must wear a proper helmet and not exceed 15 mph.

As hoverboard companies work on getting their flammable fun under control, follow the CPSC’s guidance and “have a working fire extinguisher nearby while charging or using these boards.”

Because there’s nothing cooler than not being on fire.