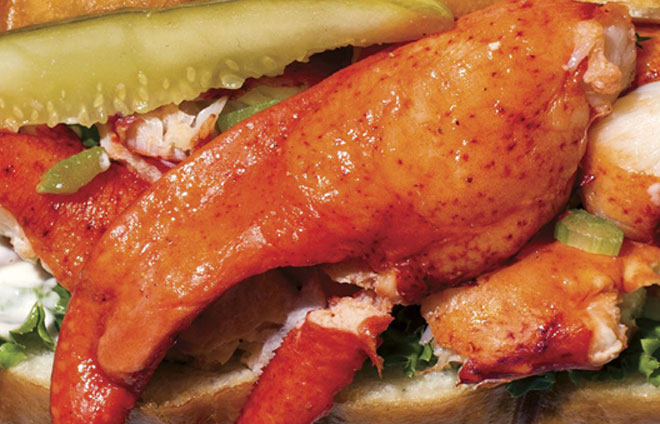 As Sacramento summer heats up, local chefs’ thoughts naturally turn to seafood. After all, who wants to eat braised short ribs when temperatures soar into the triple digits?

This classic summer sandwich originated in Maine and is popular up and down the East Coast from July 4 through Labor Day. Sacramentans can get their fix at Rudy’s Hideaway, which serves a traditional East Coast lobster roll: a toasted split-top bun filled with a quarter-pound of Maine lobster moistened with a bit of melted butter. For color and texture, there’s chopped celery, green leaf lettuce and a drizzle of lemon aioli. It comes with waffle fries on the side.

Backstory: In business since 1972, Rudy’s Hideaway put the lobster roll on the menu only three years ago because people were asking for it, says chef Kristina Golden. She experimented with recipes, mixing the lobster with mayo (too overpowering) and sauteing it in butter. But, says Golden, “the traditional East Coast way knocked it out of the park.” Rudy’s Hideaway also operates a food truck that serves lobster rolls on the road.

Backstory: Back in June, when temperatures were already hitting the century mark, Villalobos began looking to add lighter fare to the menu. “I was eating a ton of cold dishes, trying to figure out how to beat this heat,” he says, noting that the salad is filling but light. “You could have it and get on with your day without feeling bogged down.”

There are many ways to make seviche. At this East Sac restaurant, which recently reopened after a 13-month closure due to fire, chef/owner Ramiro Alarcón uses a traditional Acapulco recipe. (That’s where his father comes from.) He “cooks” chopped shrimp in lime juice and serrano peppers, then adds pico de gallo, fresh cilantro, a bit of Worcestershire sauce and a surprise ingredient: Clamato juice.

Backstory: Seviche is fresh and cold—a perfect summer nosh. Alarcón serves it on small, crisp, triangular tostadas topped with a little smear of guacamole. The ratio of fish to chip is key. “Crunch is very important,” he says, noting that too much fish to chip results in too little crunch. “When you feel the crunch, your brain wants some more.”

According to chef/co-owner Russell Okubo, there’s nothing more refreshing than this summertime dish. Chilled udon noodles doused in cold dashi broth are topped with rosy slices of hamachi sashimi and a dollop of ika sansai. (That’s diced octopus and squid salad to you.) Garnishes include nori flakes, crunchy garlic and sesame seeds. Oh yeah, there’s a bit of heat, too, from the wasabi.

Backstory: In Japan, chilled udon is served only in summer. Aji follows suit. “It’s cool and refreshing but hearty, too,” says Okubo. “If hamachi’s not your thing, you can have it with tuna or salmon instead.”