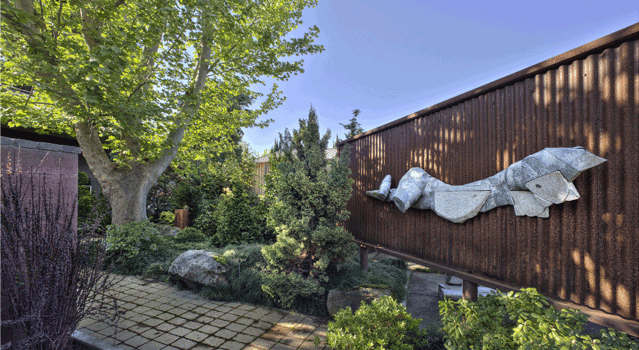 If you’re a keen observer, if you have an eye for catching extraordinary goings-on in what look like ordinary places, you may have already had your head turned by the garden wall that fronts Gerald and Deborah Walburg’s home in East Sacramento. A sturdy construction of basic cinder blocks, it’s topped by a fantastical mix of steel cutouts, horseshoes, bolts, rebar, whatever struck Gerald’s fancy to weld together. So, let’s say you have spied it and puzzled over it. Unless you’ve been invited, there’s no way you’ve seen behind it. Here’s your chance. The Walburgs’ distinctive landscape—a combination of muscular abstract art, handcrafted hardscape and harmoniously chosen plant material—will open for the 2015 East Sacramento Garden Tour, a benefit for David Lubin Elementary School. For the modest price of a ticket, you can walk the grounds and marvel at the steel and bronze sculptures, pathway mosaics, arbors and benches that Gerald, one of Sacramento’s most notable artists, has designed and fabricated over the span of his celebrated 30-plus-year career. You’ve seen his pieces before. There’s a larger-than-life nickel-rich bronze outside the entrance to the Crocker Art Museum. Another of his works is the massive, 40-foot-tall “Indo Arch” that straddles the path from Downtown Plaza to Old Sacramento. By working together, Deborah and Gerald have envisioned, planned, nurtured and pruned their own landscape into a gloriously unusual and magical space. “I’m a maker,” Gerald says modestly. “I enjoy making things with my hands.” A chance to tour this private world is an opportunity you don’t want to pass up.

Backgrounder: Gardens around the main home, studio and guesthouse will be on the tour. “I bought the property in January 1980,” Gerald says, explaining that in addition to the main house, another structure on the lot (now gone) was built right on the dirt. “We found newspapers from 1917 in the walls. It was fairly horrid. . . . The main house was probably built in the 1930s and added onto . . . the studio had been built in two stages, and I rebuilt that in 1985. That was in worse condition than the house.” The Walburgs bought the place next door 10 years ago and renovated it into a guesthouse. “There was one plane tree and some dismal grass in the backyard,” Gerald says. “Everything else you see was not here.” This year, it’s where Deborah will grow her impressive vegetable garden. “I put one in every year,” she says. Close at hand: Gerald has depicted his hands and Deborah’s in numerous openwork vessels. Be sure to see the one in front of the guesthouse. It’s a stunner.

No-mow zone: “We don’t ever do lawns,” Deborah says, explaining the yard has been continuously planted with clumps of mondo grass that Gerald’s stepfather shared with him decades ago. “You just dig up a shovelful and divide it into a section and plant it,” Deborah says. Artist in residence: Walburg is best known for his monumental steel sculptures (one on the campus of San Jose State University and another on the grounds of San Francisco General Hospital, for example). Now retired, he was a professor, teaching “mostly sculpture,” at Sac State for 35 years. Some of the pieces in his landscape are steel; others are bronze made up of various percentages of nickel and copper. Each has been placed according to size and material. “Oh, yes, we do move them around,” Deborah says.

That wall: It’s a work in progress, Gerald says. He buys cinder block in odd lots from a factory in Dixon, has them assembled in a gradient scheme of colors and textures and then crowns the top with steel cutouts, rustic bits and found objects. “I make some pieces specifically (for the wall), and some are pieces left from other (artworks),” he says. “Others I’ve found in a scrap situation, and cleaned them up and used them. A lot of this has a self-portrait quality. These are things I think about or have a feeling for.”