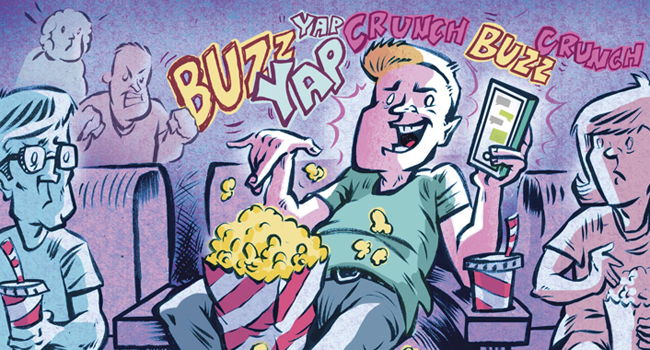 Blame it on Netflix. It seems that some of us are so accustomed to viewing entertainment from the comfort of our sofa that we’ve forgotten how to comport ourselves during a live performance.

From texting during a dramatic scene to intrusively video-recording a musical act (why not just enjoy the moment?), you don’t have to look far to find audience members behaving badly.

Sometimes the behavior is so egregious that performers and production staff are forced to take matters into their own hands. Broadway star Patti LuPone made national headlines when she snatched a cellphone away from a text-crazy audience member in the middle of a live performance.

Hope Sandoval, the ethereal vocalist from the alternative rock band Mazzy Star, once stopped midway through an intimate ballad at Harlow’s to chastise some loud patrons for yammering on during her set and shouting out comments about her appearance.

Buck Busfield, artistic director at Sacramento’s B Street Theatre, recalls the night when a drunk young couple was sitting in the front row. “Every time there was a scene change and the lights were dimmed, they began making out.” When the lights came back up, “they would sort of stop,” he says. But they were “clearly more interested in getting a room than watching the play.”

As the amorous behavior continued, the audience became more and more uncomfortable. “The stage manager called me, and at intermission I was going to ask them to please leave the theater. At the top of intermission, I was heading toward the couple when they were surrounded by a circle of patrons who proceeded to throw them out of the theater!”

Sometimes, it’s hard not to take the behavior personally. Rick Kleber, a company member at B Street, recalls the uninterested grandmother who would bring her two grandkids to the theater and always sat in the front row. “The kids would love the shows, but Grandma never watched them. She was always busy knitting a sweater, ball of yarn on the floor. No matter what we did as actors, nothing seemed to distract her from her knitting.”

Of course, not every disturbance from the audience ends badly, as B Street company member Jason Kuykendall can attest. “It was a matinee, and I was doing ‘Brighton Beach Memoirs.’ I was playing Stanley. I was talking about running away from home, and I have a line that says, ‘Maybe I’ll join the army. A sergeant in the army makes real good dough.’ And an older gentleman in the audience slowly yelled, ‘Sergeants don’t make crap.’ The other actor and I had to bow our heads and hide our laughter. The audience erupted. No offense to Neil Simon, but it was the biggest laugh in the show.”

We asked Misty Day, marketing manager at Capital Stage, for a theater insider’s perspective on how to be a gracious audience member. Her suggestions:

*Arrive early so you can use the restroom before the performance. If you require frequent bathroom breaks, ask to be seated near an exit when you purchase your tickets.

*Save candy for the lobby. “My major pet peeve is little wrappers. The act of unwrapping is possibly the most obnoxious sound ever. Pretty much everyone in theater can’t stand it.” Same with squeezing empty water bottles. Don’t do it.

*If you arrive late, be patient. Let the house manager seat you during a scene shift rather than try to stumble through a dark theater on your own.

*Save your comments for after the show. “Talking is completely distracting and very disrespectful.” If you have to ask a neighbor, “What’d he say?” because you are hard of hearing, borrow a listening device from the theater instead.

* “Embrace the fact that it’s a community event, that you’re sharing the experience not only with the actors but the other patrons as well. Anything you might do or say affects everybody in the room.”