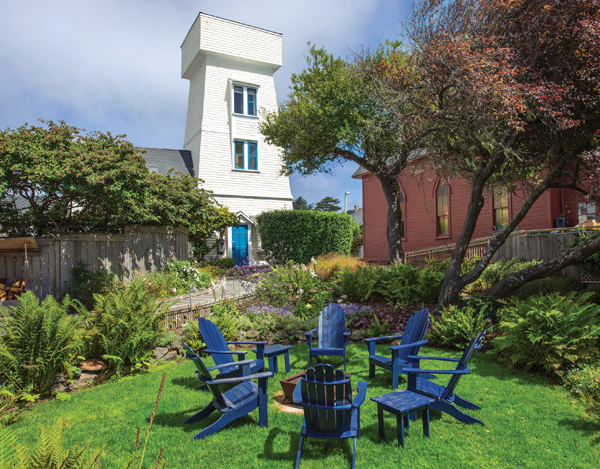 Spend the night in one of Mendocino’s historic water towers.

“Isn’t it a little ironic,” said my husband, Mike, “that we’re going to stay in a water tower and this is what’s happening?”

What was happening involved water everywhere. Rain, rain and more rain. Late February’s atmospheric river bore down on California’s northern reaches as we sloshed our way up U.S. 101, windshield wipers clacking on zippy-fast, past flooded meadows and pop-up ponds. Our destination, the tiny coastal town of Mendocino—where my job involved exploring water towers that have been converted into inn rooms—suddenly seemed a lot farther away than usual. We had passed up the turnoff to Highway 116, guessing that the road through Guerneville would be harrowing, if not already underwater—plus the idea of picking our way along the cliffs outside of Jenner in a deluge did not appeal. We’d done it before—decades before, after a rained-out abalone-diving trip—and it had been a nailbiter. Our planned route this time—Highway 128 out of Cloverdale—seemed better. We’d taken it enough times to know that the worst of the twists and turns happen within 10 miles of Cloverdale; once that’s out of the way, it’s an easy cruise through the redwoods to the coast. But on this occasion, we were stopped by an official-looking guy dressed head to toe in rubber: Road’s closed, he said, and advised we go up through Hopland, turn after the bridge, and make our way along some lesser road, “unless the Navarro River is flooding, in which case, you’ll need to turn back.”

With no cell coverage and an innkeeper waiting for us 68 miles away, we debated: go home, or go up to Willits and hope Highway 20 into Fort Bragg would be open. We stepped on the gas and hoped.

Rain roared on the roof of the car. The windshield wipers couldn’t go any faster. Rivulets ran down the roadway, caught by turning tires, splashing up inside inner wheelwells. Beside the freeway, the Russian River raged, stirring up mud as it tumbled and swelled and encroached on vineyards until only the tops of denuded vines emerged. Were we crazy to attempt to get to the coast? The trip had been planned for weeks. I had a story to write, and the deadline had already gone by.

“I seem to remember Highway 20 being like a goat path,” I told Mike, making a twisty motion with my hand.

“I’ll go slow,” he said. He already barely topped 30 miles an hour on the freeway.

Highway 20 west out of Willits winds through the mountains for about 35 miles to Fort Bragg, where it meets up with Highway 1. Luck joined us that rainy day, because the road stayed open and we saw nothing more alarming than some impromptu waterfalls. No mudslides and no flooding, despite some steep terrain and angry creeks. We arrived at the Sweetwater Inn & Spa in Mendocino a bit behind schedule, but no worse for wear.

Mendocino’s Water Towers—Any visitor to Mendocino has seen them, these wooden structures all around town. Built around the turn of the 19th century, the water towers collected, stored and supplied fresh water to Mendocino’s residents. Because the town’s water table lies very close to the land surface, in-ground water storage back then was near impossible. Enter the water tower. Windmills provided the power to run pumps that pulled water up to be stored, and at 30 to 60 feet tall, each tower’s height enabled the pressure to run water into pipes below. Dozens of water towers remain in the Mendocino area. Some have been converted into artists’ studios, residences or gift shops, and some remain simply as landmarks. A few have been turned into accommodations—especially where an inn has gone up around them.

Sweetwater Inn & Spa—With three water tower rooms/suites on-site, Sweetwater Inn & Spa sits on Main Street right across from Mendocino’s headlands. Its main building is a yellow Victorian house, and the property has a variety of accommodations options available, from the main house to the cottages to the water towers. The compound also includes a spa, with redwood soaking tubs and saunas.

Two of Sweetwater’s water towers function as full homes-away-from home, with a kitchen in one (Redwood) and a kitchenette in the other (Sears), and sleeping arrangements for at least four between the two floors. One water tower (Sweetwater) space is simply a room over the spa, but it comes with a big perk: private use of the downstairs spa tub and sauna after hours.

We stayed in the Redwood tower, a two-story space separated by an indoor spiral staircase, with the kitchen and sunken living room downstairs (warmed by a gas fireplace) and the bedroom and bathroom upstairs (warmed by another one). Another set of outdoor staircases led to the private viewing deck, a spot we wouldn’t see until two days later when the weather cleared.

The Redwood tower felt a bit like a cabin, with tab-top curtains on the downstairs windows and wood blinds upstairs. A red couch graced the living room, cozy by the fire and a flat-screen television. The bathroom held both a tub and shower—separately—and two sinks made for plenty of space. The bedroom faced the Victorian and the ocean and headlands, with a queen-size bed piled high with pillows. Another flat screen sat in the corner by the fireplace. The water tower shape created the effect of the walls closing in; the bedroom was narrower up in the high ceiling than at the floorline. When we arrived, as rain dribbled down the windows, innkeeper Sarah pointed out a small leak in the corner of the bedroom, with a warning not to set our bags there. Little leaks, it seems, are a hallmark of these old water towers when the weather gets wild. We saw others during our explorations. Another observation: Multistory water tower accommodations can be very vertical. Not a surprise, given their original purpose, but best not to attempt a stay in one of these if you’ve got a bum knee or a vertigo issue that flares up on staircases.

Our first night there, we dined at the renowned Café Beaujolais, where we hadn’t eaten since our honeymoon more than 26 years ago. It’s still a cozy little spot inside an old house, with soft green walls, white wainscoting and white tablecloths. At first, we were the only people in the place—a stormy winter night, mid-week, hardly the backdrop for a rush. But a small rush arrived anyway: several couples who braved the weather to feast on black cod, duck l’orange, squab, ribeye and filet. An herbed green salad came topped with delicious button mushrooms, and Mike never stopped talking about the venison cheek/risotto appetizer he ordered. For me, it was all about the black cod, served with smoky bok choy and roasted beets over bright pink agnolotti stuffed with wild mushrooms.

After dinner, we returned to the Redwood tower, where the wind blew out the pilot light on our downstairs fireplace and the power flickered on and off a few times. Upstairs, we could really hear the wind and rain lashing the tower. Warm and dry, we listened as gusts slammed against the walls and rain dumped down. Drips and drops magnified as they perhaps gathered on the deck above, and spilled over, running down the outside walls and making strange wet splashes. Just when we thought it couldn’t get any wilder, a long deep siren sounded, like an air-raid alert. “What is that?” asked Mike. “A tsunami warning?”

I thought about the headlands beyond—surely we were too high up for such a thing. Then I remembered reading about this in the inn welcome packet. The siren, one block over on Lansing Street, summons volunteer firefighters in the case of emergency. Given the intensity of the storm (we heard the next day that wind gusts topped 55 miles per hour), no doubt someone needed rescuing somewhere.

The next day dawned gray and rainy, but the winds had died down. Around town, miniponds and rivers had formed, and just south of town, the Big River blasted its way to the ocean; muddy water browned the sea for miles. I couldn’t help wondering how many water towers could’ve been filled in the old days, just in the one night’s deluge. Quite a few, it would seem, as we discovered later that on the same night we heard the sirens in Mendocino, the communities of Guerneville and Sebastopol experienced catastrophic flooding, and creeks and rivers overflowed the banks in all regions up and down California’s north coast. We saw signs of mudslides on our way back home on Highway 20, but the sun had come out—and so had the cleanup crews—and we journeyed home under gorgeous blue skies filled with dynamic clouds, past the greenest of meadows.

MacCallum House—Out behind this historic inn on Albion Street, a whitewashed water tower built in the late 1800s provides a luxurious three-story retreat for a couple—or two. The ground floor includes a king-size bed, half bath and sitting area. (Beneath the coffee table lies a hand-dug well, its top visible through a glass overlay.) Stairs to the second level full bathroom reveal not only a spa tub for two, but a shower and sauna too. On the top floor, which has a queen-size bed, windows capture a gorgeous view of the ocean.

The second night we were in town, as stars began to peek through the thinning cloud cover, we had dinner at MacCallum House. Even though it was an easy couple-block walk from the Sweetwater Inn, we weren’t sure of the weather, so we drove. When we parked, we emerged from the car to an orchestra of frogs and crickets so loud that I worried they might keep us awake over at the Sweetwater! We learned that a pond lies just across the street from MacCallum House, and the frogs and crickets living around it get going like that whenever it rains.

The dining room and bar/breakfast room take up the lower floor of MacCallum House. In the dining room, dim and wood-paneled with a central fireplace and built-in wine cabinet, we enjoyed a variety of appetizers, including a pozole packed with pork and hominy and topped with tortilla strips and watermelon radish slices, crab cakes with a zingy mango slaw and seaweed sticks, and grilled flatbread with prosciutto and spinach. For dinner, Mike had porcini gnocchi—a dish packed with fun: butternut squash, pistachios, greens and sundried tomato pesto. My seared ahi came piled on top of a black bean smear with a side of arugula/bacon/avocado salad over cilantro rice. We finished off the night with a Chocolate Extravaganza—which indeed it was, with a chocolate almond torte, pecan truffle and a scoop of chocolate stout sorbet.

More Mendocino Water Towers—The JD House tower, located in the center of town on Ukiah Street, has recently been renovated into a bright and airy one-story suite with lots of windows. The Bever-Roberts Tower, located across the street from the Mendocino Art Center on Little Lake Street, operates as a vacation rental. It’s a three-story beauty, a circa-1910 tower that had fallen into disrepair, and in 1992, it was renovated as a guest house. Local artists chipped in with the décor that includes hand-painted tile and photos of the original tower. The best 360-degree view in town is accessible from the tower’s widow’s walk.

Little River—The Inn at Schoolhouse Creek in Little River, a few miles south of Mendocino, includes a water tower cottage that was an armory during World War II, when the property was taken over by the U.S. Coast Guard to house shore patrol. Nowadays, instead of an anti-aircraft gun in the lookout tower’s base, you’ll find a hot tub. Take the ladder stairs up to the viewing platform for gorgeous views of the coastline. The cottage itself, with a queen bed and a sunny bathroom, sits through a garden courtyard, a perfect escape for two.