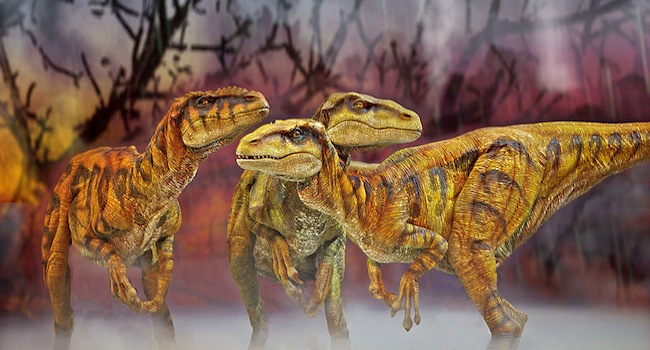 Kids will go wild for the live-action animatronic dinosaurs soon to be scurrying and stomping across the floor at the Sleep Train Arena. The immensely popular Walking with Dinosaurs: The Arena Spectacular is making its way through Sacramento Jan. 1–4 with seven shows that are sure to delight both children and adults. Based on the award-winning BBC documentary, this live production takes viewers through an educational and entertaining history of dinosaurs, starting with the Cretaceous Period and moving all the way through the Triassic Period. Internationally renowned designers have teamed up with engineers, scientists and animatronic experts to create 20 life-size dinosaurs, including the tyrannosaurus rex, the stegosaurus, the plateosaurus, and the brachiosaurus (coming in at a staggering 36 feet tall and 56 feet long). It took a team of 50 a whole year to build these monstrous and wonderful creatures, and now it takes a team of three to operate just one of them. Having now played for more than 8 million people around the world, the show has earned quite a few accolades, including stellar reviews from The Guardian, The Daily Telegraph, The Sun and more. This show is an unmissable feat of engineering, creativity and child-friendly history. To find out more, visit here.