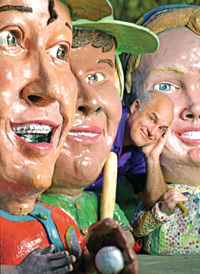 Tony Natsoulas knows precisely the moment he is finished with a sculpture.

“When it makes me laugh, I know it’s done,” says the creator of whimsical life-sized and larger-than-life-sized busts and full-length figures that have appeared in museums and galleries around the world and in public venues throughout Northern California, earning him acclaim by the Smithsonian Institution as one of the top 100 craft artists in the United States.

Sweet, funny, self-deprecating and hopelessly nostalgic, the 46-year-old Natsoulas displays none of the brooding, disenchanted, impoverished beatnik-type traits sometimes associated with people who make their living as artists. His capers in clay remind others never to take life—or art—too seriously.

And we do laugh, the lucky few of us who get to visit Tony and his wife, Donna, at their unassuming ranch-style home in a sleepy Sacramento neighborhood populated mostly by senior citizens (who no doubt would be jolted wide awake if Tony ever got his way and painted the exterior of the house bright orange with purple trim. It’s the only thing he and Donna fight about.) The first invitation by the Natsoulases to smile is their doorbell, which is not a bell at all but the croak of Lurch from the 1960s creepy, kooky television sitcom “The Addams Family”: “You rang?”

t gets better. Once inside, bombarded with shape and color on par with Disneyland, I feel my years melt away. In every nook, every cranny, are happy hues (to wit: the bubblegum-colored washer and dryer) and fanciful works of art—some crafted by Natsoulas, but most by his teachers, mentors, friends and muses. I imagine that for Natsoulas it’s like hosting a never-ending party surrounded by all his favorite people, so palpable are their spirits. Presiding over the entrance is Romeo the robot, crafted from vintage used parts by Clayton Bailey, professor emeritus of ceramics at California State University, Hayward, whose works have been displayed at museums and  galleries around the world. David Gilhooly’s ceramic “Mixed Green Salad” of toy figures is parked on a cylindrical table next to a retro chair in the living room. The prominent position above the fireplace is reserved for the self-portrait lithograph of Natsoulas’ most influential mentor of all, the late Robert Arneson, whose ceramics program at the University of California, Davis, turned out a collection of prominent artists and inspired Natsoulas to pursue a career in art. Natsoulas even wears his friends’ creations in the form of art-promoting T-shirts by Fred Babb, which have become his uniform. But the elephant in the living room, proportionally speaking, is something Natsoulas created himself, which, when pressed, he admits is among his favorite pieces. It’s a larger-than-life ceramic figure of Audrey Meadows as Alice Kramden from the TV classic “The Honeymooners,” outfitted as a waitress.

“Remember how she used to complain about not having any money? All the time, right? And she had a teeny apartment, she didn’t have any kids, she had nothing to do, right? And so I thought, ‘I’m going to give her a job—as a waitress,’” Natsoulas says.

But there’s more to this figure than meets the eye. Natsoulas never sculpts anyone he doesn’t love or admire, and he finds a lot to admire in Alice Kramden.

“I just think she was the greatest because she was able to stand up to Ralph (her husband, played by Jackie Gleason),” he says. “There was somebody intimidating in my own life and I wasn’t able to stand up to them. Alice was, and I admire that in her.”

Natsoulas, of course, commands admiration in his own right, though he is extremely modest about it. Having received his master of fine arts degree from UC Davis in 1985, Natsoulas, who grew up in Davis, studied with many celebrated names in California art, including Arneson, Robert Brady, Wayne Thiebaud, Roy DeForest and Manuel Neri. He is a sculptor of cultural icons such as The Beatles, Auntie Mame, Audrey Hepburn, Pablo Picasso and Babe Ruth, as well as people who are near and dear to him. Many galleries and museums hold his work, including the San Jose Museum of Art, the Laguna Art Museum, the Oakland Museum of California and the Triton Museum of Art in Santa Clara. In 2002, Natsoulas’ solo exhibition at the Crocker Art Museum, titled “Barococo” (a blend of the Baroque and Rococo eras), was received with delight. It featured busts of his wife, friends and colleagues dressed in outrageous 18th-century garb with hummingbirds, flowers and pets as accoutrements.

“I love that period. I just love that whole exaggeration—so decadent and so wild,” Natsoulas says. “It’s hard for me to imagine why they would have dressed like that.”

This spring, four of Natsoulas’ pieces will be featured in an exhibition of contemporary figurative ceramics from around the world at Japan’s Shigaraki Ceramic Cultural Park, where Natsoulas will spend a month as an artist in residence. The show will travel to other museums throughout Japan until 2007, and one of Natsoulas’ figures will become part of the Shigaraki permanent collection. Currently on display through Feb. 26 are some of Natsoulas’ works at Stanford’s Iris & B. Gerald Cantor Center for Visual Arts. The exhibit, titled “Fired at Davis,” spotlights figurative ceramic sculpture by Arneson, visiting professors and students at UC Davis from the Paula and Ross Turk collection. In addition, the San Jose Museum of Art recently acquired a large ceramic bust by Natsoulas for its permanent collection. The sculpture is now in an exhibition there titled “Tales from the Kiln.”

Natsoulas considers his invitation to Japan an indication of “moving up a rung” on the artistic ladder. He ascended a rung previously in 2004, when an archivist interviewed him for the Nanette L. Laitman Documentation Project for Craft and Decorative Art in America, which will be kept at the American Archives at the Smithsonian Museum. The Museum of Arts and Design in New York is planning a show this year featuring works by the 100 top artists chosen for the archives.

Throughout his career, Natsoulas has scored several commissions as well, including the figures shoppers see balancing objects or “flying” over the escalators at the Westfield Downtown Plaza in Sacramento. He says he gets a kick out of people who take their family Christmas-card portraits in front of the sculptures or furtively press money or hamburgers into the sculptures’ hands. But as much as some people enjoy it, public art, for some reason, always touches a nerve in others. Natsoulas still is smarting over comments made several years ago by a shop owner who said that she hated his piece and that it was driving customers away. (To which Natsoulas replied, “Well, I don’t particularly like your store, either, but I wouldn’t say anything about it. I would just walk past it.”)

Most recently, Natsoulas was commissioned by the city of Sacramento to sculpt five figures representing milestones in Little League baseball history. The sculptures, cast in bronze and painted with auto paint, are scheduled to be installed early this year at Tahoe Tallac Park on San Joaquin Street in Tahoe Park. Not that Natsoulas plans to attend the unveiling, if there is one. He already knows what critics might say, and frankly, he doesn’t want to hear it. “How dare they waste money on something decorative?” Or, “What’s with these big, ugly pieces? They’re not realistic.” Or, “My kid could do that.”

All poppycock, says Donna, herself an artist (she paints on vintage purses) and Tony’s biggest supporter.
“We fight that all the time, people having issues,” she says. “Anybody can paint a portrait, anybody can sculpt something that looks realistic. It’s when somebody puts their own spin on it that makes it interesting.”
As for Natsoulas’ art not being realistic, well, he would argue that anything with three dimensions “makes you feel like it could come alive at any moment,” as opposed to a two-dimensional drawing or painting.
He’s felt that way since childhood, when his father, a UC Davis psychology professor, and his mother, an anthropology student, took him to museums while visiting relatives in New York. At the Museum of Modern Art, the Metropolitan Museum of Art and the Guggenheim Museum, Natsoulas became enthralled with pop art and the works of Andy Warhol, George Segal and Edward Keinholz. He was handed his first block of clay as an 11-year-old in summer school and hasn’t put it down since.

Natsoulas mines childhood memories for much of his artistic inspiration. He is particularly fond of certain toys from the 1960s whose influence can be found in his work: Louis Marx’s Nutty Mads (“I remember the day I bought one of these for 25 cents at the Ben Franklin in Davis”) and Ed “Big Daddy” Roth’s Rat Fink.
It takes about three weeks of eight-hour days in his garage/workshop for Natsoulas to complete one of his life-sized masterpieces. Looking at photographs of his subjects from as many angles as possible, he sculpts from the bottom up, instinctively adjusting for the punishing realities of physics, then fires each piece in a top-loading kiln for three days.

The firing portion of the project is touchy. Not only might a sculpture crack or explode, but an artist as small in stature as Natsoulas—“I’m 5-foot-4 ¾. With my hair I used to be 5-5 ½,” he says—is in danger of falling into the kiln. It happened to Natsoulas in his studio at his old house.

“Donna is upstairs vacuuming, and I’m putting the Mardi Gras queen’s head (for ‘Barococo’) into the kiln,” he says, relishing the opportunity to tell the story to someone new. “My kiln is 36 inches tall, which doesn’t seem that tall, but it is. So I have to stand on a block, and I’m holding this piece and I have to put it all the way down in the bottom of the kiln, on tiptoes. So I’m halfway in and I’m thinking, ‘I’m not tall enough to actually put it all the way down.’ And I don’t have enough strength to pull myself back out again, and I don’t want to drop it, so I’m yelling at Donna and of course she’s vacuuming. ‘Donna! Donna! Donna!’ I’m there for five minutes and she finally turns off the vacuum. She comes in and she sees me stuck.”

Donna, shaking with laughter, picks up the story. “All I see is his butt and his legs. And he goes, ‘Pull on my legs!'”

“From that point on,” Natsoulas says, “I’ve always had her hold my ankles when I put my sculptures in the kiln.”

That’s about as close to suffering for his art as Natsoulas gets.