THEN. When Sonya Fe was a little girl, her father would take her into downtown Los Angeles on the bus. There, she remembered admiring lovely paintings depicting Mexican women on the outside of department stores. She was an artist even then.

“I used to think that was so pretty. But my father goes, ‘It’s a pretty painting, but it’s empty,’” she recalls. “And I was like, ‘What do you mean it’s empty?’ He was telling me that a lot of artists, even to this day, they’ll produce beautiful works of art—but there’s no soul. That’s when he would tell me about the paintings the majority of people would have over their couch.” 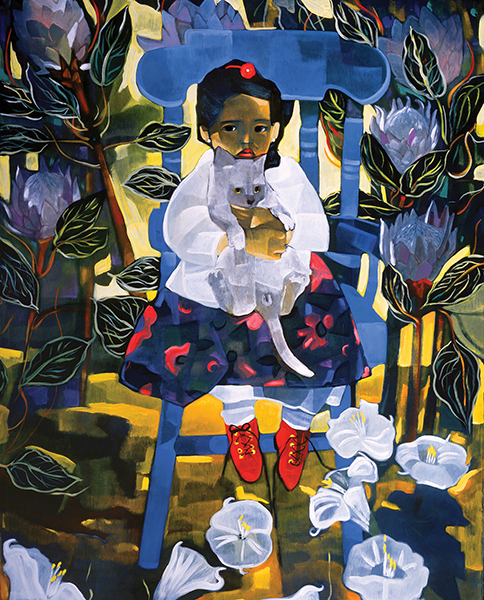 She heard him in the back of her mind as she painted into her 20s. Fe paints realism. She captures injustice. Her paintings speak truth to power.

“When I was that age, I was producing things that were happening in front of me and things that I wasn’t happy about that I could change silently because I was a painter,” she says. “I’m just an artist for justice.”

After graduating from ArtCenter College of Design in Pasadena, she took a trip to Mexico that completely changed her life. There, her true artistic point of view was awakened. She learned perspective and soaked up all the culture that was missing from her American curriculum.

Now. “Now that I’m older, it’s basically the same thing. I see things that disturb me and I touch bases on that,” says Fe, now 67. “I do pretty paintings, too. I like to do beauty. I want beauty in this world. But I also do powerful stuff, where things irk me.”

These days, she’s inspired by the stay-at-home order, migrant children who are still locked in cages and the people who protest the safety guidelines meant to prevent the further spread of the coronavirus.

And after all these years, she still listens to her father’s advice.

“A lot of times, you see a beautiful painting or a slick painting, and you’ll look at it, but about a week or two later, you’re bored with it,” she says. “But a great painting will hold your attention forever.” artistsonyafe.com