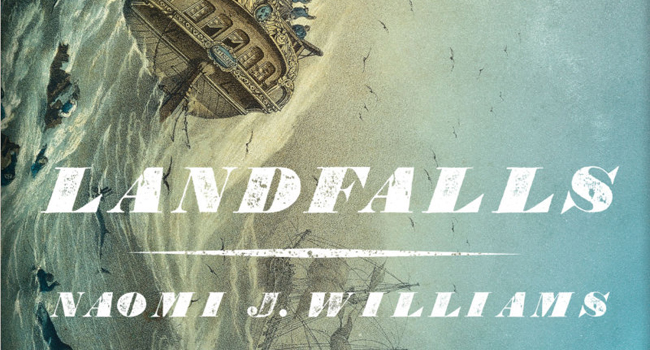 Has collecting maps from the expedition become an obsession?

No, because it’s an expensive hobby. A couple were gifts. I would love to have a bunch of maps from the expedition, but these aren’t cheap objects.

It’s possible that your book may elevate the prices of the maps.

(Laughs.) I didn’t have that in mind, but that would be interesting.

Landfalls is based on a historical event. If you had to break down the percentage of how much of it you had to truly fictionalize, what would you come up with?

I feel it’s impossible to quantify, because what I fictionalized were almost entirely people’s reactions or motivations. I tried to work within the parameters of known historical facts, and within them I invented. I’m not that imaginative. I found the given facts were interesting enough that I didn’t have to embroider all that much.

When you found those facts, did you cheer and say “this gives me something to work with”?

Definitely. [Chapter 3, “Concepción”] was problematic, because they were in Chile for a long time. From the letters and journal accounts, it sounds as if everything was peachy. Eventually I learned that naturalist Louis Dufresne had requested to leave the expedition while in Chile. One account said Lapérouse persuaded him to stay, but in a Spanish-language account by Governor O’Higgins, I learned Dufresne was denied permission to stay in Chile by the Spanish authorities. What if Lapérouse found a way to persuade the authorities to refuse him permission? So that part I embroidered, but I worked within existing documentation.

For someone who has written a novel of an historical event, do you ever feel you have to be on the defensive, or you’re just sharing your love of this event?

It’s more the latter. I think the question of how much of this really happened comes from a human impulse to know. From a purely selfish, and self-aggrandizing point of view, I don’t mind sharing just how much bloody research I did. (Laughs.) When people ask me those questions, it gives me a chance to share more details that didn’t make it into the book. For a geek like me, that’s really fun. I haven’t gotten tired of it yet.

Jonathan Franzen, another Farrar Straus Giroux author, had his novel, Purity, released only a month after yours. You’ve essentially shared review space with him. How has that been?

I have very mixed feelings about him. He seems to have gone out of his way to become the bad boy of the literary world—more power to him. I read the excerpt from Purity in the New Yorker, kind of expecting to be annoyed, but it was really good. Our New York Times book reviews came out in the same edition of the Sunday book reviews section. Mine was in front of his, and I was inordinately pleased by that. I guess I have grudging respect for him. I think as a FSG writer I can get copies of his book for free, so when it comes out in paperback I’ll ask for a copy.